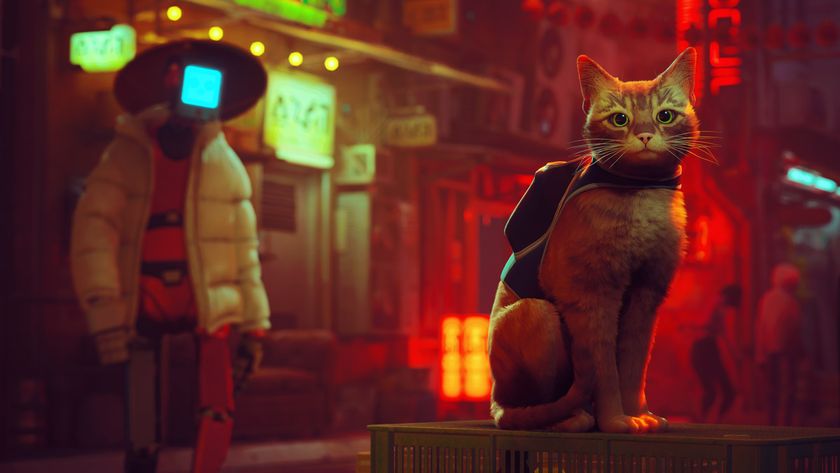 Stray is a dazzling sci-fi adventure game about an adorable cat trying to solve an ancient mystery.

Ten minutes into Stray, I was greeted with one of the greatest gaming prompts of all time: Press O to Meow. Developer BlueTwelve Studio's debut game Stray is a sci-fi adventure that puts players in the paws of an adorable cat, who has to navigate a strange world filled with robots, flesh-eating mice and labyrinthian cybercities. Playing as a cat is a very strong gimmick, but what really makes this game special is its commitment to the bit, going above and beyond its unique premise with gorgeous visuals, a lush soundtrack and a memorable cast of friendly robots.

I got to play through Stray last weekend, and the time I spent with its feline protagonist has taught me one thing: my cat could never. 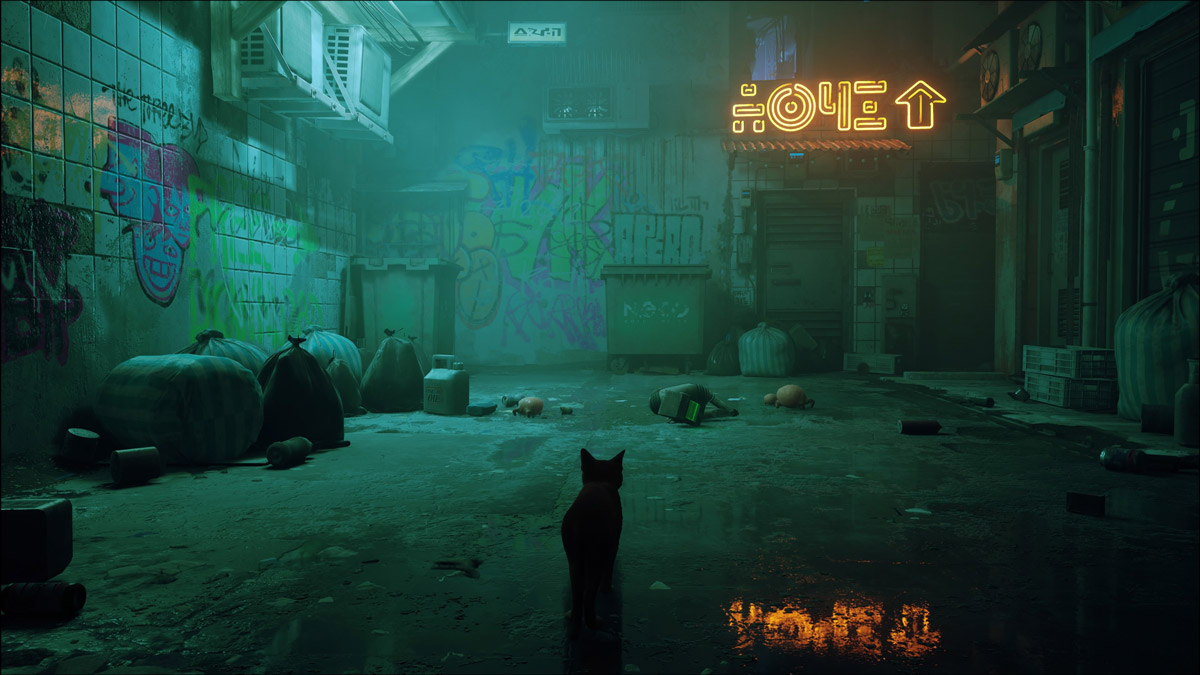 In Stray, you play as a cat roaming a post-apocalyptic world that has been ravaged by an enigmatic virus. A series of accidents leads the cat tumbling downwards into the heart of a sprawling, machine-operated city, lost and confused in strange new surroundings. The cat will have to embark on a lengthy journey across neon-lit towns, grimy slums and sewers infested with enemies all to unravel an ancient mystery and return to the world outside.

A lot of Stray’s appeal hinges on the sense of awe these techno-dystopian environments elicit, so I’ll spoil as little of the experience as possible to preserve that. This game has an impressive breadth of diverse environments to explore over what ended up being a relatively short campaign. Between the shorter and more linear levels filled with puzzles and chase sequences, and the larger, more open environments that let you explore and meet tons of characters, it never feels like you’re spending too long in just one place.

This is still a game you really want to take your time with. BlueTwelve Studio has packed in so much attention to detail in these levels, from the hundreds of neon-lit signs and graffiti hanging off signposts and spray-painted on walls, to the design of the game’s robot population (which amusingly, bears a striking resemblance to Saga’s Robot Kingdom) and far beyond. Some levels, like Midtown, had me wandering about for ages, accomplishing very little besides taking pictures and gazing at how pretty everything looked. It’s the foremost experience of cat tourism in gaming. I also have to shout out how fantastic the game’s lo-fi soundtrack is, switching beats for frantic chases and peaceful exploration alike without taking away from the game’s stripped-back vibe. 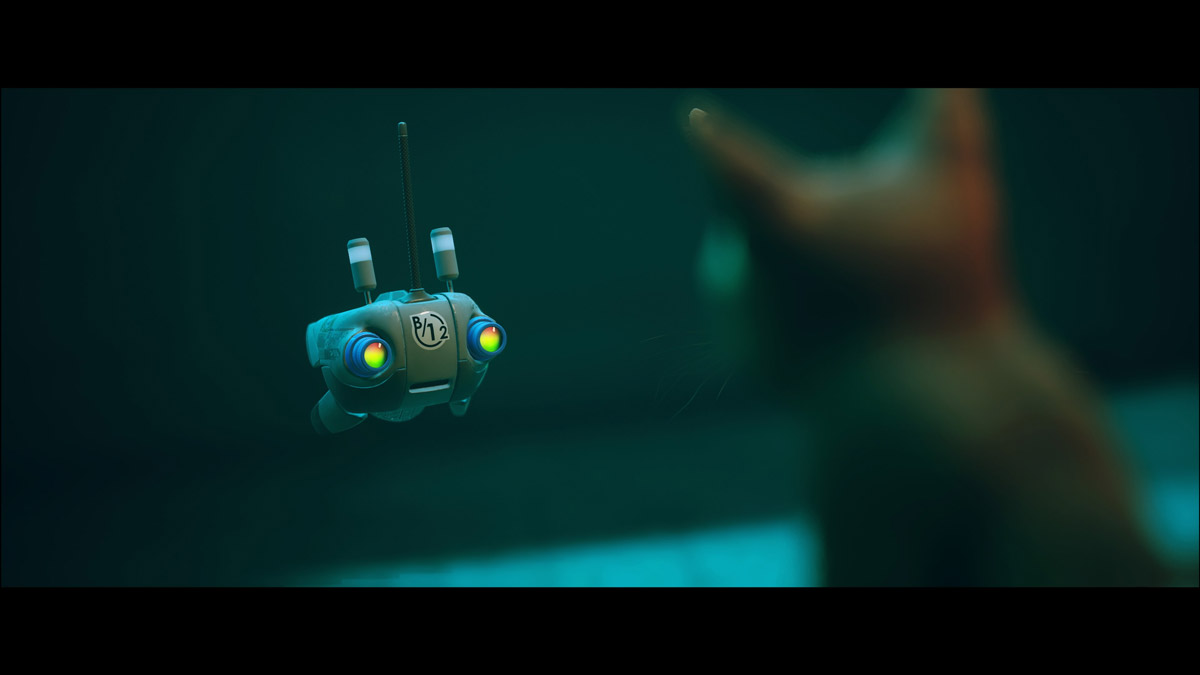 Stray’s levels are fun to explore, but what really stuck with me as the credits rolled were just how many memorable characters I had met along the way. How many people had helped or deterred the cat on its journey, that I had simply taken for granted or left behind without knowing I would never see them again. The feline’s sole and constant companion throughout the game is B-12, a small flying droid that provides assistance by hacking doors, translating unknown languages and providing lore on their mysterious new surroundings. Beyond B-12, you also end up meeting many denizens of the dystopian urban sprawl, from characters trying to escape just like the cat, to others simply going about their day to day routines the best they can.

The cat is stumbling upon an entire civilisation here, and the game does a tremendous job of making that believable. There are different levels of society to meet and explore, all teeming with life. Poor robots living in the slums, knitting clothes and selling cans of pop to get by. More fortunate robots in cyberpunk cities, drinking the day away in pubs or dancing to electro-pop in clubs. And more, so much more, as the cat treats an ancient mystery the same way it does a scratching post, stripping its layers to the core with reckless abandon. 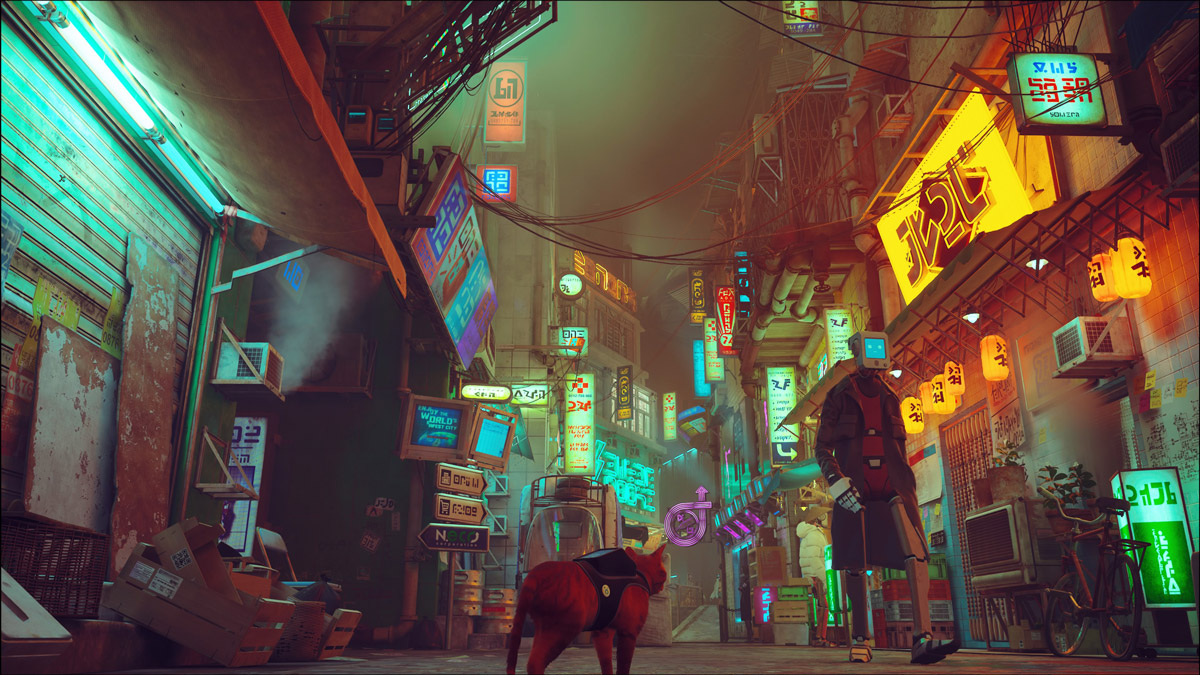 Stray’s gameplay is almost reminiscent of a walking simulator at times, often leaving you in large areas where you’re free to just wander around and poke at a quest or two. There isn’t a whole lot of depth here, though. When you exit populated towns, you enter stealth sequences where you either have to avoid Zurks, little mice that make adorable sounds as they eat you whole, or unfriendly robots on patrol. These levels really aren’t that punishing, and it’s easy to get through them quickly even if you’re spotted.

Stray’s platforming feels buttery smooth, making the most out of its nimble feline's abilities to allow you to jump into vents, crawl underneath beds and climb all the way up towering structures to view its cities and environments from a whole new perspective. Its levels are rich with interactive objects, from piles of books that you can jump off to throw askew to potted plants and buckets you can just whack off of ledges. Why? Because you are a cat, and that is what cats do. Early in the game for example, I stumbled upon a carpet I could interact with by mashing buttons. The cat started clawing at the carpet and it took me way too long to realise that I wasn’t digging up anything useful at all. I was just destroying furniture. 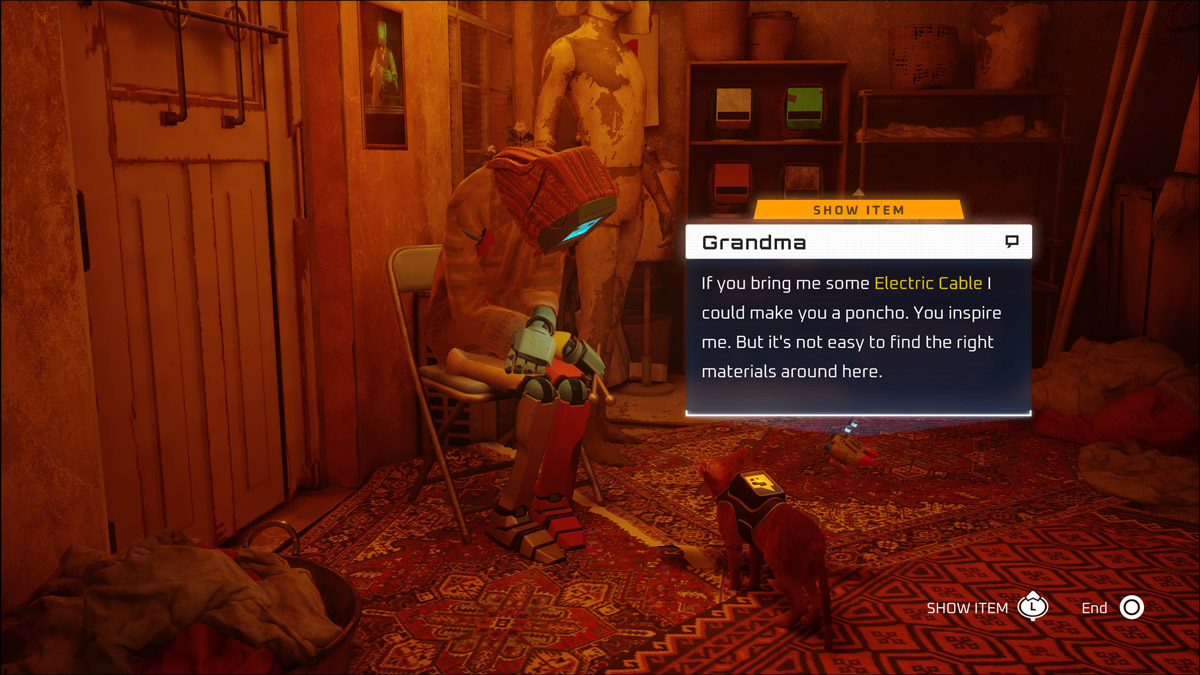 A lot of love and care has clearly gone into designing this game’s traversal around its feline protagonist, and it truly shows. It’s so much fun to just scamper around in circles, harass robots by mewling incessantly and scale buildings by hopping from pipes to ledges. Again, most of the puzzles lack depth, usually involving the player moving obstacles around to reach higher places or picking up clues in the environment to find an objective. A few of these stumped me for a minute, but it’s mostly easy-breezy all the way through. Its final level in particular seemed a little too simple to complete, leading to a somewhat anticlimactic ending. The story and environments definitely do the heavy lifting here.

I played Stray on the PlayStation 5 and noticed no performance issues or frame drops, save for a bug in The Slums, which duplicated every character model in town so that one was frozen in T-pose while the other behaved normally. A bizarre issue, but not game-breaking, and I never encountered anything like it again. Fingers crossed it gets patched out before launch. 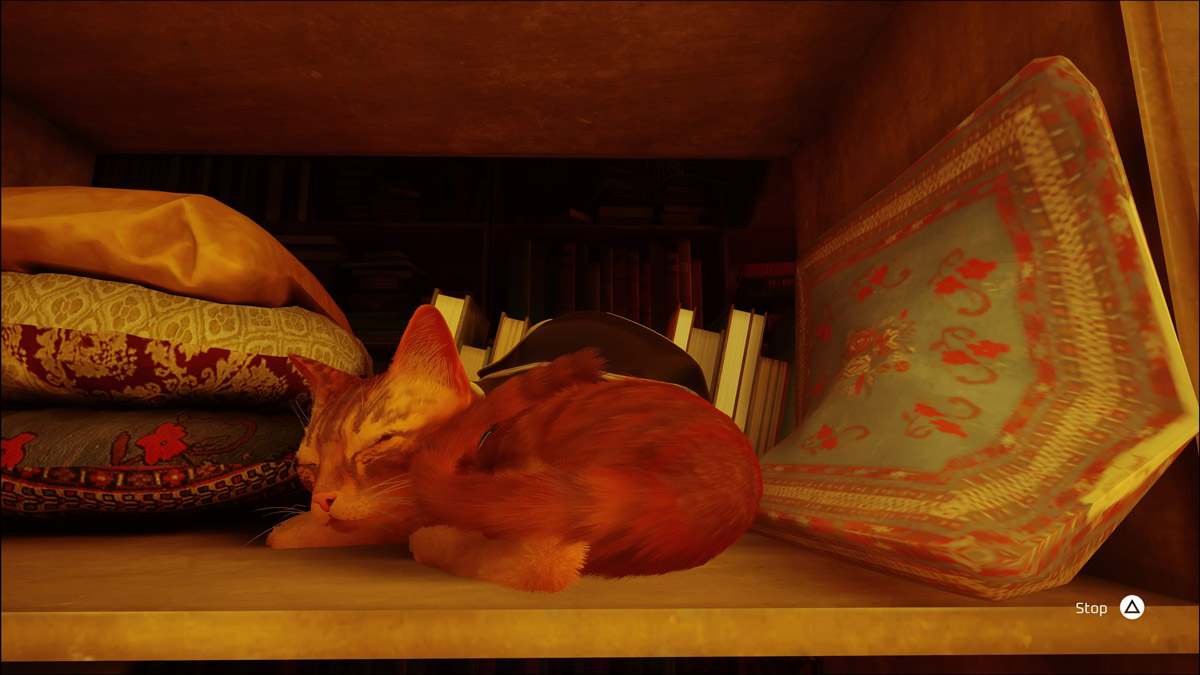 Stray offers an interesting mystery wrapped around a gorgeous world filled with memorable characters and locations to explore. Its titular feline is endlessly loveable if aloof, and B-12 serves as an interesting companion with its own story to tell, as the duo navigate the city’s many dangers to find a way out. This is a rather short game (most players will likely beat it in six or seven hours), but there’s replayability in the form of lore collectibles that offer insight on how this world came to be. While it always feels fun to frolic about as the cat, the game’s puzzles lack bite and the story moved too quickly for me to spend as much time as I'd have liked with its wide and colourful cast of characters.

This is a sparkling debut for BlueTwelve Studio however, and I’m looking forward to whatever the studio gets up to next. There’s room for a sequel here, but maybe that’s just wishful thinking. One can dream.

Are you looking forward to Stray?