Sergey Bragin Russia 0
Sergey 'God' Bragin first was using GodKillThemAll nickname, and he was explaining where did that nick came from. His favourite TV Series 'Spartacus' had the title of one Episode - 'KillThemAll', since he liked it a lot, he has decided to use this prefix in his nickname. On some occasions he cuts his nickname to simply G.
Notifications 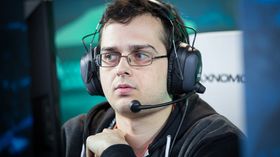