A few years ago, Dota Autochess took the game by storm. Now, we look at another auto battler making waves in the Dota 2 arcade – Ability Arena.

The Dota 2 arcade is not a place that makes the news often, but once in a while, there is a game that gets extremely popular and makes a lot of players go to the arcade to find out what the hype is about. Overthrow did that to an extent. Dota Autochess was an insane hit and brought players from other games into Dota 2; the game essentially brought to life the concept of auto battlers. While no other custom game has done what Autochess was able to accomplish, there have been a few good ones to take notice of in the last few years, and the latest one is Ability Arena.

Created by the Dota 2 talents Shannon “SUNSfan” Scotten and Andrew “Jenkins” Jenkins, Ability Arena is a mix of Ability Draft in Dota 2 and Dota Autochess. It is a game that allows you to mix and match abilities on a group of five heroes in a bid to get the best of seven other players. When the game was released, GosuGamers did an interview with SUNSfan about the conceptualization and long term plan for Ability Arena. Here, we take a look at what Ability Arena is all about and a basic guide to the game to get started.

To play Ability Arena, you will need to start Dota 2. The game can be found in the ‘ARCADE’ tab of Dota 2. Currently, Ability Arena is at version 2.5, which is why the number can be seen besides the name. The main theme of the game is to get the best possible combinations of skills on your heroes, and outlast the other seven players in the game to win. 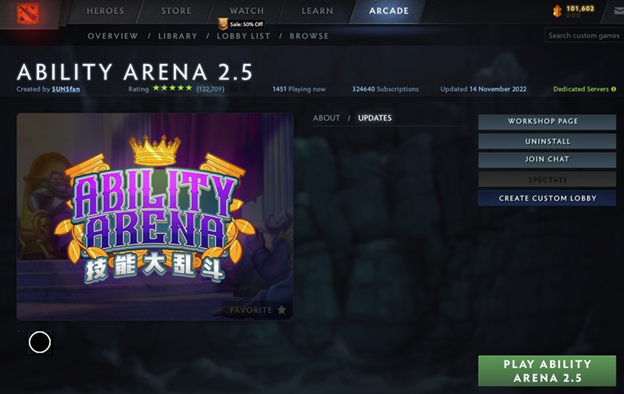 Once the game finds eight players to fill the lobby and starts, the first option will be to select an arena. That is just a cosmetic choice, and does not make a difference in the game. The first major selection you will have to make is which God you will be playing with.

You will be able to choose one of five Gods. Each God offers something unique, even though the overarching theme of the game remains the same irrespective of the God selected. In case you aren’t happy with the initial selection, there is an option to reshuffle the Gods once. On the top left of each God will be a star, denoting the difficulty level. For players who are just starting with Ability Arena, it is recommended to stick with the one star (Difficulty: Easy) Gods until you get the hang of the game. Not all Gods will be available to new players. Aghanim can be obtained by playing for a week. Others can be purchased using in game gold, while yet others are unlocked by purchasing the Battle Pass. The Gods that are available for all since the beginning are: 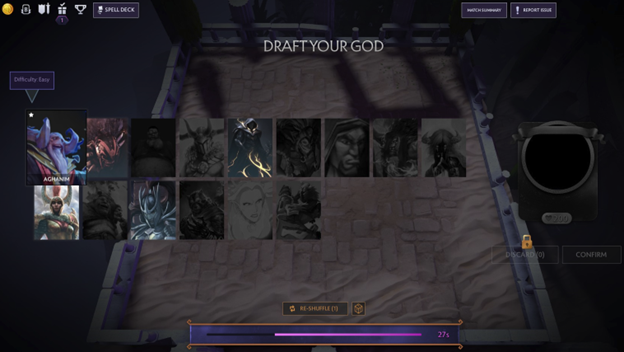 The suggestion for new players is to stick to either Centaur Warrunner, Dazzle or Legion Commander for the first few games. Once you get the hang of Ability Arena, you can explore other Gods. The ability offered by each of the Gods can be read on the selection screen.

Every player begins with 200 HP. At each round, you are matched up against the team of another player. If you win, you don’t lose any HP. If you lose, there is a reduction in HP depending on how many enemy heroes are alive.

Once the game begins, you will have two major tasks in front of you – select a hero and select two skills. Let’s take a slightly deeper look into each of these things. 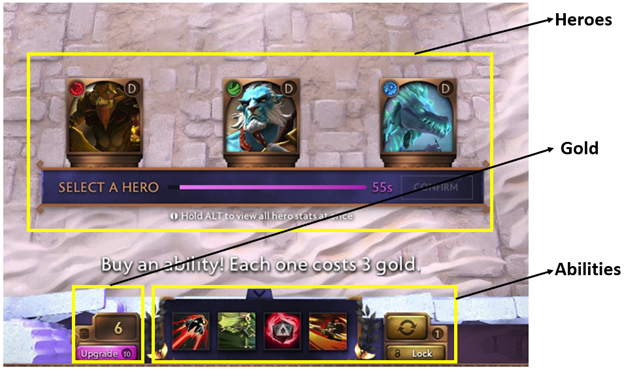 There are five tiers of heroes – D, C, B, A, and S. With each subsequent round of hero selection, the tier of heroes offered goes up. Hero selection is something that takes a bit of experience and is something that we will explore in more detail in an advanced guide to the game. But everything from HP, mana, attack damage, stat gain, attack range, and movement speed can help make decisions on which hero might be suitable for a particular situation. 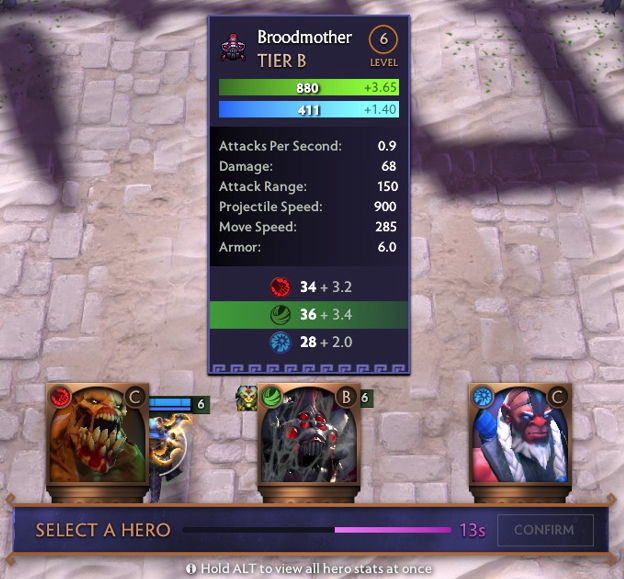 Every hero can use four skills, one of which can be an ultimate. In case you are unhappy with a hero, you can reroll it for 2 gold and get three other options.

Skills are the main variables that give Ability Arena its uniqueness. Skills are available for 3 gold, and can be sold for 2 gold. That stays constant throughout the game. Your task is to get the best skills to outsmart your opponents.

There are 20 copies of each skill available in the pool to all players. Buying more copies takes the skill to a higher level. The first three levels scale the skill. After 3, the next bumps come at level 6 of the skill (Super) and level 9 of the skill (Gaben). Super and Gaben levels can have massive effects on the game, and a lot depends on which skills are worth going to for Gaben. 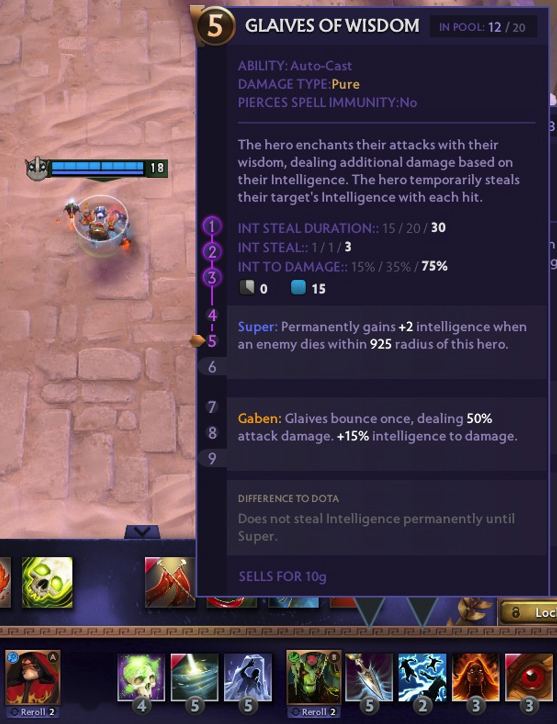 In case you aren’t happy with the skills available in the shop, they can be rerolled for 1 gold. And if you run out of gold while rerolling, the skills can be locked for the next round. 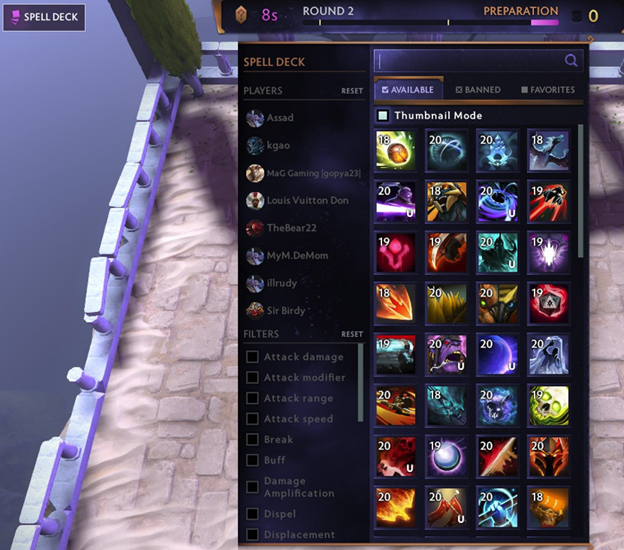 Gold is the commodity that allows you to buy skills, reroll heroes and upgrade shop levels. You begin with 6 gold in the first round, and the gold increases by 2 each round until it reaches a cap at 20 at round 8. Unspent gold does not carry over to the next round, so be sure to spend as much gold as possible in a round. 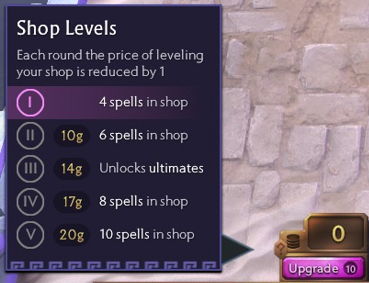 Once the game ends, the skill combinations of all the players can be seen (they can be seen during the game as well). This gives an idea of the different strategies used by players, and which ones bore fruit. Strategies not only change based on the skills that a player gets, but also on the God. 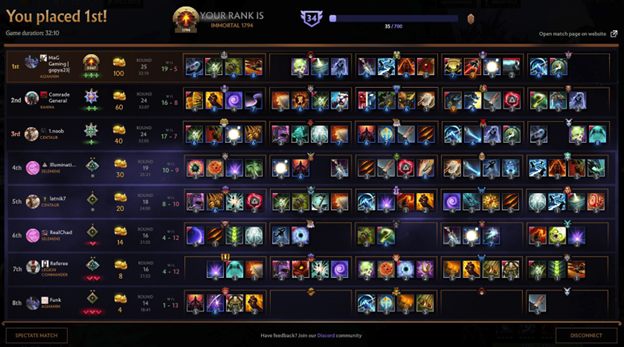 There was a lot covered here, even though this is just a beginner’s guidem because the game is quite complex with a lot of variables. There are a lot of minute factors to be taken into consideration, which become evident as you get used to playing. Because of the numerous skills available and the ability to mix and match them on five different heroes, the possibilities are endless!

In the days to come, GosuGamers will come up with a few advanced guides for Ability Arena as well. If you enjoyed Dota Autochess or Dota 2 Underlords, Ability Arena is worth a try. In case you have any questions regarding the game, let us know in the comments and we can address them in the upcoming articles.