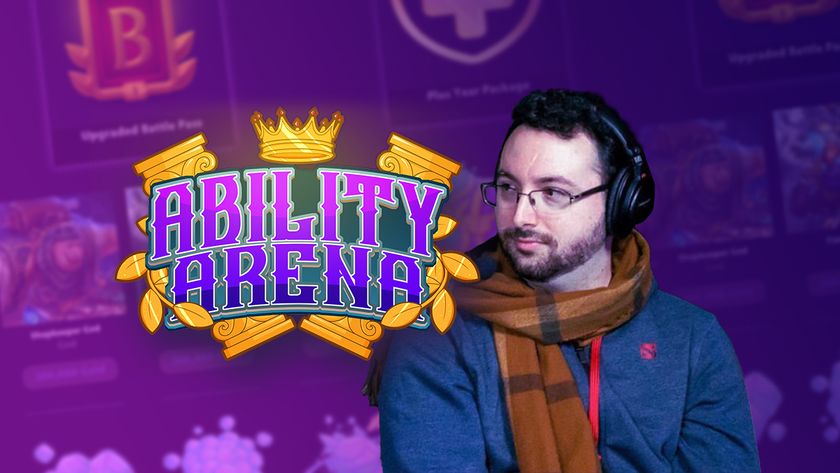 GosuGamers caught up with Dota 2 caster SUNSfan to talk about his new contribution to the world of Dota 2, Ability Arena.

Shannon “SUNSfan” Scotten is known most for his casting prowess in Dota 2. But more recently, he has made news in the community with his new custom game in the Dota 2 client – Ability Arena. The game has been very well received, and GosuGamers caught up with him to talk about how it was conceptualized, what are the long-term plans for it, and everything in between.

Hello SUNSfan! Thank you for taking the time for the interview. First off, congratulations on the launch of Ability Arena! Are you happy with the launch and how the game has been received?

Thanks! After a year of development and a lot of testing we were pretty confident that the game would be well received, but definitely not to this level. We've had to upgrade our servers two times and we will likely have to do it again, just to meet the demands of all the traffic we're getting.

Let's get to the beginning of it all. How and when was Ability Arena conceptualized, and who was on the core team?

I'm a big fan of other auto battlers and I was really into Atomic War at the time. There were some things in the game that I wasn't a huge fan of, like the talent system, fighting rules and the game balance. But I just kind of gave them a pass during the early stages of playing. I thought they would address these things that I considered to be very frustrating to deal with.  After some time, however, I realized that these were purposeful design choices.

So from there, I accepted that it would never change and decided to make my own game. I contacted Andrew “Jenkins” Jenkins early on with my idea of creating a game that melds the best of both worlds – auto battlers and ability draft. I contacted Dr. Gester, a programmer within the Dota 2 scene with whom I had been trying to work for a lot of years. Every single coder I have talked to in the past considers him an absolute legend. After he agreed to work with our crazy idea, we also brought on Joel Larsson, who helped shape some of the game rules in the early stage of development. From there, we continued to add modders in the community to work on our passion project. What was estimated to take 3-4 months, ended up taking a year. But it was a ton of fun to do and I learned a lot.

I'm really glad to see the game is doing well! But what made the team decide on releasing it just before TI? Wouldn't after TI have made a bigger impact when there is a lull in the Dota 2 scene?

The original plan was to release Ability Arena a lot earlier, but there were a lot of things that took longer than anticipated. Last time I released a mod (POG), it basically died when the Battle Pass came out. That is mostly because the game mode essentially competed with Turbo Mode, which you were much more incentivized to play with the goodies you get from the Battle Pass.

This time, I made sure the lifespan of the game would be unaffected by anything Valve did. Having said that, they are releasing a custom game after TI11, so that probably would have been the theoretical worst time to release Ability Arena. Either way, I'm happy with how it worked out. We get five weeks to kind of beta test all our ideas and refine them for upcoming patches.

The Auto Chess in Dota 2 is doing well, and so is Ability Arena, so there is definitely a market for auto battlers. But Dota 2 Underlords didn't do too well - what do you think happened there? You must have taken that into consideration before starting with this project.

I think one main issue was the entire concept of Underlords as actual units. Not many people were too fond of that. If you think about it, that was the main unique thing separating it from Auto Chess and other auto battlers, so I'm sure it was disheartening for them to see the reception. Having said that, the main reason it died is that they stopped updating it. Much like Artifact, if they had just kept at it, there could have been a good number of loyal players that would have kept the game alive.

I agree. Dota 2 Underlords was fun until they brought the actual Underlords into the game. The way you have it, a bit like Hearthstone Battlegrounds, is probably the most optimum way. Every player has something unique, but it mostly still depends on the units on the board. So let's now get into the game - Eventually, how many Gods do you plan to have for Ability Arena? Will there be a set of paid and free Gods each season, and will there be rotations?

As long as we are getting support, we will continue to come out with new Gods. We are looking for feedback on our current monetization system, so the current system is not set in stone.

But our original plan was to release at least 2 Gods per season (monthly), where one of them can be unlocked via the Battle Pass, while the other is in a God chest. With each season will also come new spells being rotated in and out, along with a balance patch. I'm not totally sure how often we want to mess with things during the season itself, but we will do so on a case-by-case basis.

This coming week, for example, we will be delivering a pretty big balance patch, which will include some new spells as well as a couple of surprises that I think people will be excited about.

As long as we are getting support, we will continue to come out with new Gods

Ever since the game was released to the public, what aspects of it have surprised you? Positive and negative.

The main thing that surprised me is the popularity of the game or specifically, the ability for people to seemingly grind non-stop. This has made us realize how far off we were on our calculations of giving gold and XP. People have been flying through the Battle Pass, where we would prefer it to take a little bit longer. But on the other hand, we haven't been giving out enough gold, so it feels like you are stuck with the free Gods a little too long. The XP issue will be sorted out for next season, but for the gold we instituted a patch a few days ago that doubles the gold you get for playing (and double on top of that for PLUS subscribers). This will hopefully make things feel a little better for those that don't want to spend any money.

I did hear about the XP and Gold issue on 'We Say Things'. But I guess that's a good problem to have, people grinding a lot. I also heard that you are planning on having a community and streamer tournament monthly! What is the long-term goal of this project? Are you thinking of making it a standalone game and an esport?

The goal right now is to continue to update the game and try not to let things get stale. As for a standalone game, that would be amazing, but would entirely rely on an outside investor becoming interested in addition to our goals actually aligning.  But yes, Jenkins and I would like to do game design full-time, but we know this is just the beginning of our road, so I don't want to look too far into the future just yet.

Aa standalone game, would be amazing, but would entirely rely on an outside investor becoming interested in addition to our goals actually aligning

Which is your favorite God(s) in the game? Was the decision to bring Artifact heroes just a tribute to the game?!

My favorite God is definitely Centaur (shocker). I love making people tanky and using spells that are not picked very often. The decision to bring Artifact heroes into the pool was definitely meant as a tribute of sorts. But without revealing anything more, that is not the only universe we will be representing via our Gods.

What are hero tiers based on? Are they based on stats?

Originally, we got an Ability Draft hero tier list from Ben “Noxville” Steenhuisen, and we've used that as a baseline. But we have been refining it since some of the stats are not as relevant in our game mode. There is a lot more refining left to do.

Have there been any insane combos that you saw from the community that impressed you?! What are your favorite ones?

Keep in mind that we have been testing pretty rigorously for close to a year, so at the top of my head, I can't remember any combos that have been supremely unique. Having said that,  I love Flesh Golem + Double Edge + Rot + magic resistance spells. I also think the Icarus Dive + Black Hole combo is hilarious. I'm still waiting for people to come up with some crazy combos that involve some lesser picked spells like Overload. And I'm still quite disappointed that people haven't really discovered the godliness that is Dark Pact. What an awesome spell!

Haha, I think I am going to try out all these spells now! Why was Chaotic Offering taken out? Was it too powerful?

It was taken out because the AI was horrific. We're doing another pass on general AI that will fix spells similar to Chaotic Offering. So expect to see it back soon, but with a nerf.

Quick switch of gears to Dota 2 - congrats on being invited to TI11! How do you like the TI11 patch, and what teams do you think fall in the favorites and in the dark horse categories?

Thanks! This patch isn't really all that different from last year, but the balance of heroes has changed a lot. Either way, I think the patch has been fun to cast and I can't wait to see some Primal Beast on the TI stage.

I think this will finally be PSG.LGD's year. It seems almost poetic for it to go that way with Zhang “Faith_Bian” Ruida's imminent retirement. I'm not sure if Entity can be considered a dark horse, but they did have to qualify through the Western European regional qualifiers for TI11. They have impressed me the most. I'm a real fan of their offlane-carry strat they have been so successful with, and I think they will do very well at TI11.

It would indeed be quite poetic if PSG.LGD win with it being Faith_Bian's last tournament. Thank you so much for your time, SUNSfan, and on behalf of GosuGamers, we wish you and the Ability Arena team the very best for the future of the game!

Thanks for the interview. It's always fun making games that people are enjoying. We hope everyone sticks with us as we have some crazy ass stuff which we will eventually be adding to the game.