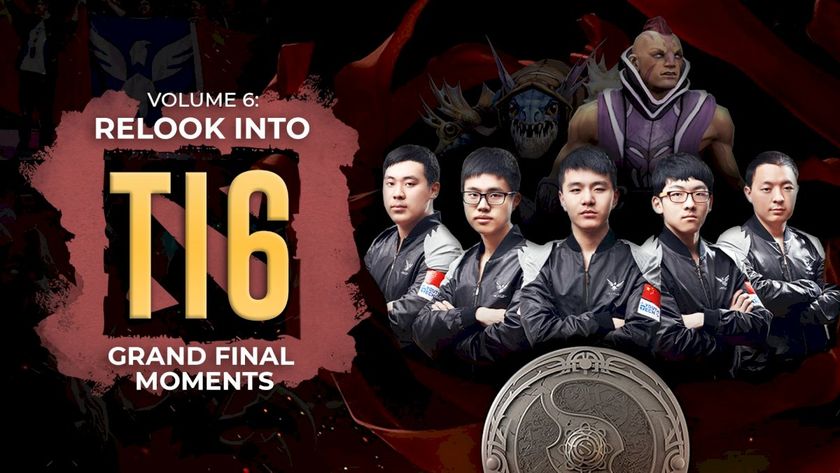 During the weeks leading up to TI10, GosuGamers will be taking a closer look back at the meta for each of The Internationals through the years. This week is TI6.

In our journey looking at the metas through the grand finals of The International championships, we now come to a unique station with a unique winner – The International 2016 or TI6. This station is also the first beyond the halfway mark from the beginning, TI1, to where we currently stand, a little over a month before TI10.

TI6 was held at the Key Arena in Seattle, the venue that would go on to host all Tis till TI7. The prize pool for the tournament, thanks to the TI5 compendium, had gone up to nearly $20.8 million from $18.4 million from the previous year, which was not that big a prize pool rise. However, because the distribution was changed to be 44% for the winner as compared to 36% at TI5, the prize for the winning team went up from $6.6 million to $9.1 million.

The format for TI6 was pretty much the same as TI5. There were a total of 16 teams-

Wings Gaming made it to the grand finals, sweeping everyone in their path. The team, which was completely unknown till the start of 2016, but had risen to prominence because of their crazy drafts and results to go with it. The other finalists were Digital Chaos, who had formed their roster only a few months before TI6, and surprised everyone by making it to the grand finals. The two teams had met in the first round of the upper bracket, where Wings got the better of DC with a 2-1 win.

Like Team Secret were expected to make it to the grand finals of TI5, OG were the team to beat at TI6, having won two of the three newly introduced Valve Majors in the season. But OG ended up falling quite early in the tournament, and the tournament was open for the taking.

TI6 was played on the 6.88b patch, which was a few patches ahead of 6.84c, the patch on which TI4 was played. Let’s take a look at the general changes between that time which could have had a significant impact on the game play.

●        Scans a targeted 900 AoE for 8 seconds. Indicates whether there are enemy heroes in that area during the 8 seconds.

●        Lane creeps now give 20% of experience when denied by neutrals rather than 0% (normal player denies give 50% experience).

There were a lot of changes going from TI4 to TI5 in order to get rid of the death ball meta and get better gold and experience formulas. But after tinkering with the gold and XP equations for a year, IceFrog did not want to change the good mix he had found at TI5. So going into TI6, there were barely any economy or experience changes. The only significant difference in general changes was the addition of the Arcane Rune and the availability of Scan.

The major change for Captains Mode came in the form of the ban and pick orders. For three Tis (from TI3 to TI5), the team with the first pick also had the last pick, making the first pick stronger. But for TI6, the team with the second pick had the last pick, leading to changes to the way teams approached the draft. Having the final say in the draft, the ability to round out your draft without an answer from the opponent, isn’t a bad thing by any means.

●        While the gold and experience formulas were similar to TI5, the heroes were quite a bit different. TI5 had a total of 90 heroes picked, while TI6 had 105 heroes picked, which was significantly higher than any of the previous Tis (to be fair, some of the early ones didn’t have that many options to choose from).

●        The comeback mechanic, which was introduced before TI5, still existed at TI6.

●        Drow Ranger was first phase banned in all four games of the grand final, while Elder Titan and Beastmaster were banned thrice in the first phase, showing the strength and impact of these heroes during TI6 meta.

●        In every game, Dire had first pick, which either meant teams favored Dire or they favored second pick, due to the changes that had occurred in the ban-pick phases. For the previous two Tis (TI4 and TI5), Radiant had had the first pick in all games of the grand finals. 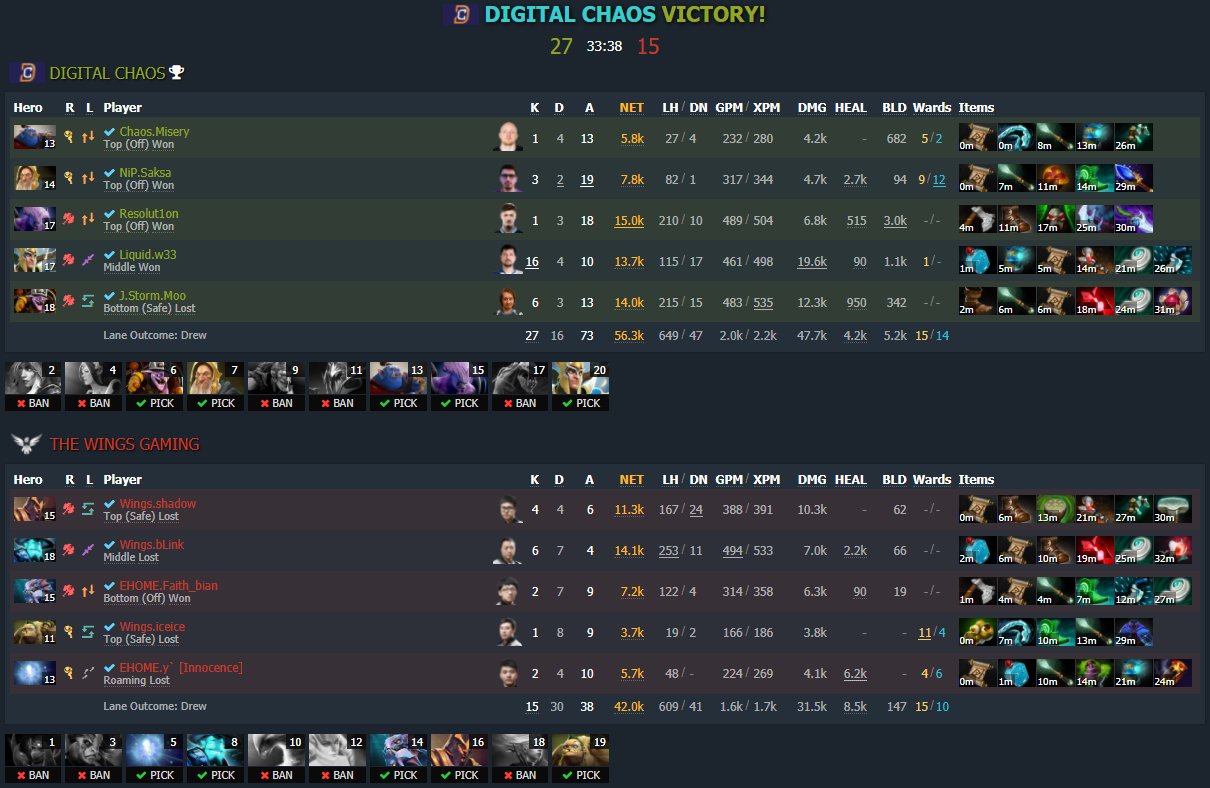 Right off the bat, the first game is an indicator of the crazy drafts that were feasible in the TI6 meta. A mid Skywrath Mage, carry Silencer and a support Pudge is not something you see every day in a professional game, let alone a TI game.

Back then, Aghanim’s Scepter was the go to item for Keeper of the Light, as it still is in some scenarios. But in those days, it provided KotL with permanent Spirit Form and added a heal on Illuminate during day time.

Digital Chaos won the game on the back of their Skywrath Mage, with Faceless Void used more of a hero for lockdown with Chronosphere. It is surprising to see that none of the Wings cores prioritized BKB against a core Skywrath. 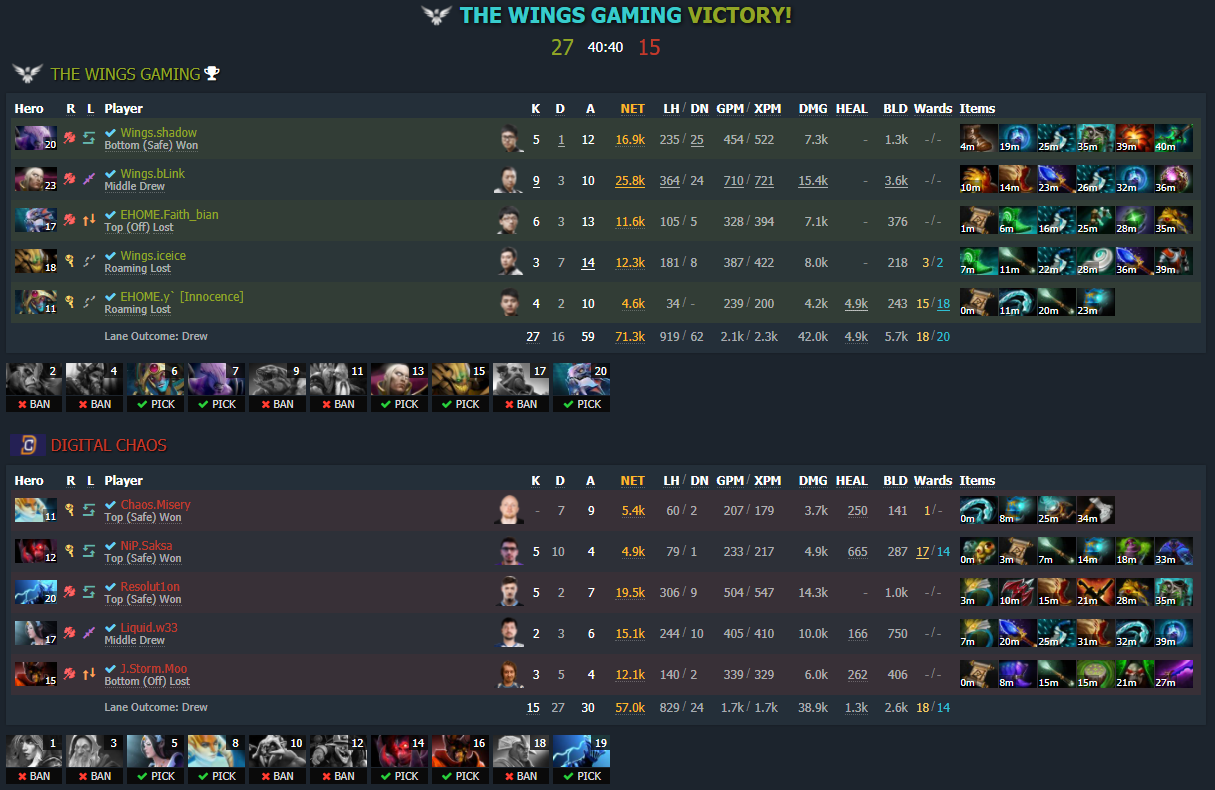 Game 2 was the point from where Wings started to feel themselves and play the high level of Dota 2 that had taken them to the grand finals. Like DC had done in game 1, Wings used the Faceless Void in game 2 more as a lockdown hero who played the position 2 role, with Invoker playing the position 1 role and getting more farm priority. This was something Wings Gaming did very well – put bLink position 1 Invoker with shadow playing a role with lesser farm priority. They did it with Void and they did it with Brewmaster as well. The first iteration of OG played the Invoker-Void combo quite well too, and possibly were the ones to pioneer it. Void actually went for an early Blink Dagger to be able to catch out enemies from a long distance and land the perfect Chrono. DC had two saves against the Chrono – Song of the Siren and Disruption. But with the main damage dealer being outside the Chronosphere, well positioned, it didn’t do too much.

A bit of a coincidence in the first two games – DC won game 1 with a score of 27-15, and Wings returned the favor with the same exact score in game 2. 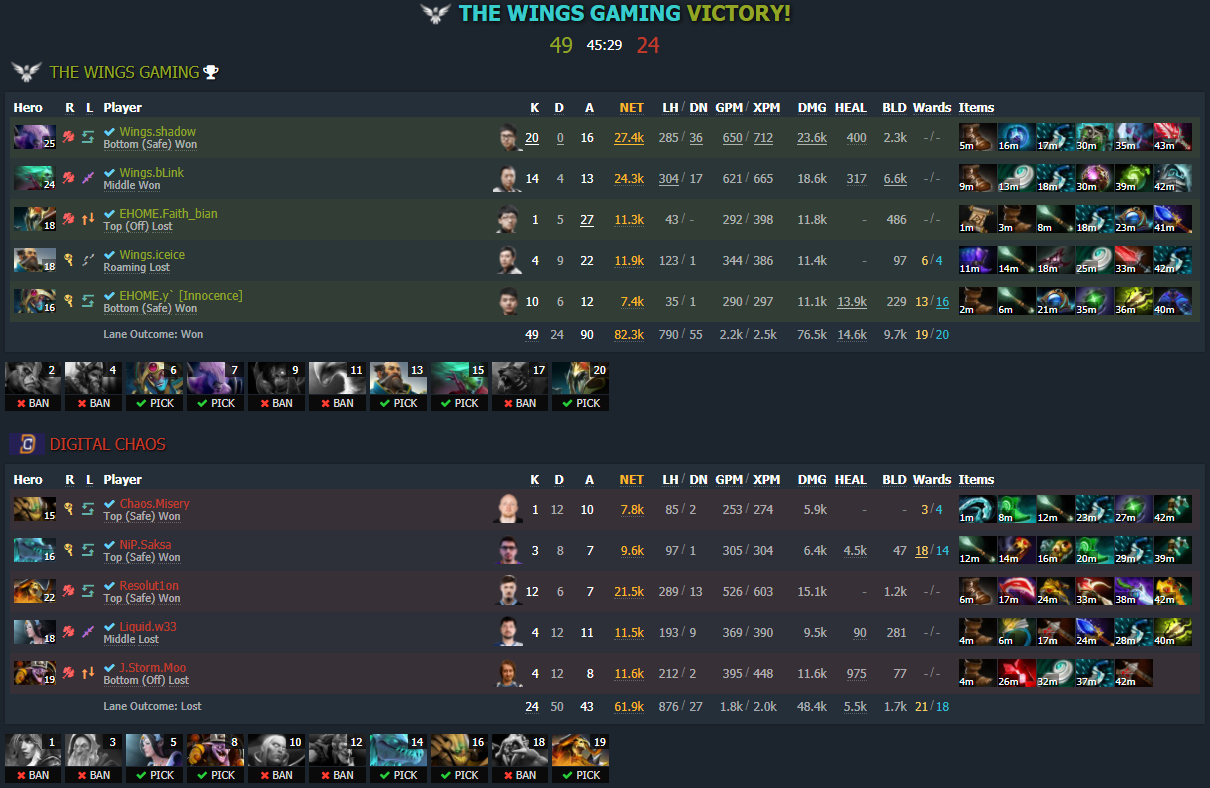 Game 3 and game 4 give a good idea of the comeback factor. Wings were always leading in game 3, and DC were playing catchup from the beginning. But just one team fight and a couple of pickoffs going DCs way were enough to pull the net worth advantage back from 14k to 4.5k. In the end, shadow’s Faceless Void proved to be a bit too much to handle for DC, but had they managed to get him down even once, it would have been a massive gold swing. 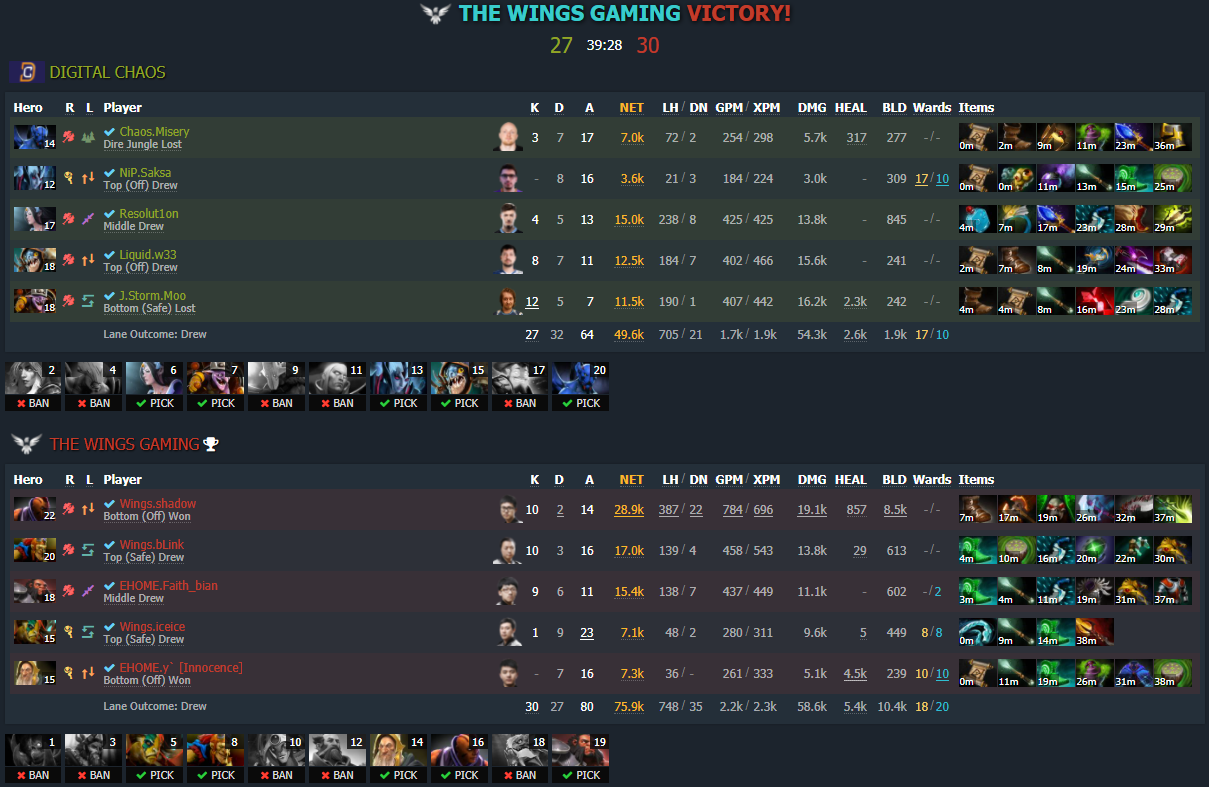 Game 4 was where Digital Chaos made a mess of their early lead and Wings Gaming were able to pull themselves back with the rubber band effect. DC took an 8.5k lead, which isn’t what you want to see when playing an Anti-Mage. The AM lineup always wants to be leading in net worth.

But one botched team fight by DC was all it took for Wings to get back in the game. Because of the net worth factor and rubber band effect, Wings ended up getting 3.6k gold for three kills, two of which were big streaks. That was all the opening that they needed, and the Anti-Mage eventually took over the game to get Wings the win and the deserved title of TI6 champions.

The GPMs for the two teams weren’t two far apart, and in fact, were quite similar to that of the teams from the TI5 grand finals. By TI5, farming had increased and gotten a lot more efficient as compared to TI1, but it wasn’t still at the level it is at today.

With that, we come to the end of the deep dive into the grand finals of TI6 to see how the meta and playstyle compare to that of today. Wings Gaming came, saw and conquered out of nowhere with their quirky drafts and unique playstyle. Next week, we’ll take a look at the contest between Team Liquid and Newbee in the TI7 meta analysis.

Was the Dota 2 prowess displayed by the TI6 winning Wings Gaming roster the smoothest ever at The International championships?