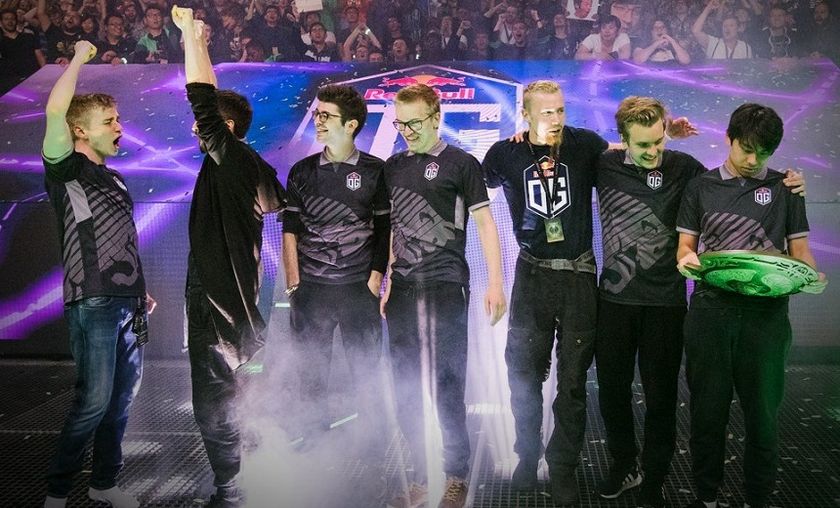 OG are your champions of The International 2018 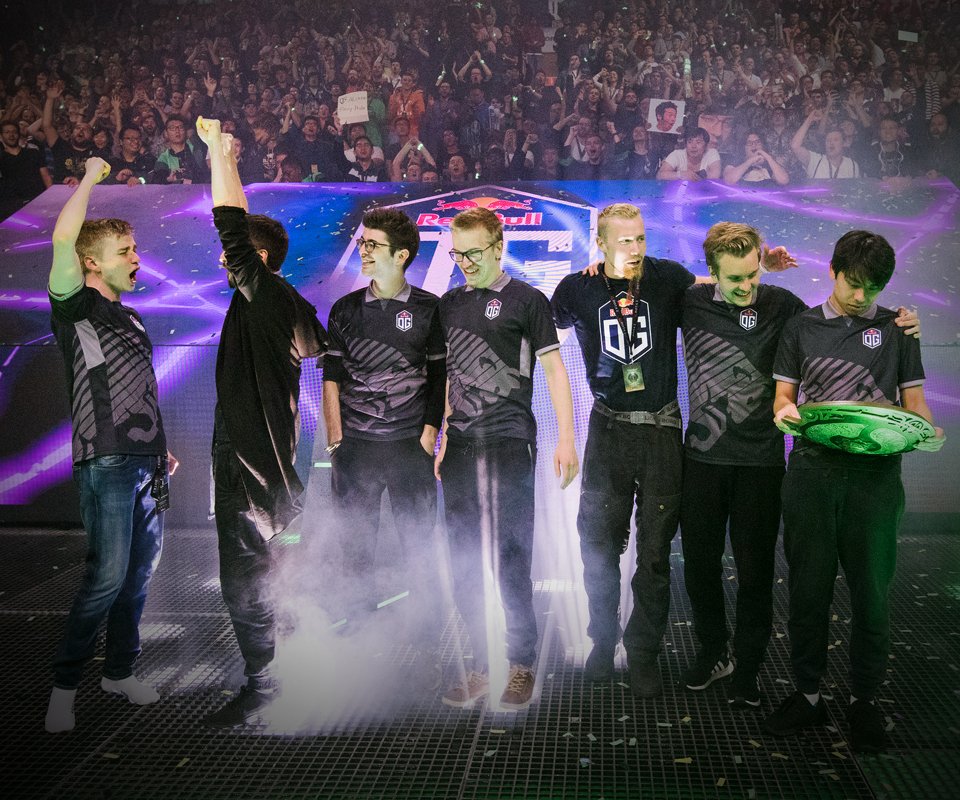 OG won the hearts of spectators and players all over the world in a historic win over LGD, securing the highest prize in esports history, over $11.2 million dollars and the Aegis of Champions to boot.

The grand final of The International 2018 was hyped to an astronomical level, and with good reason. On one side was a European squad with a new roster qualifying through the open qualifiers and exceeding all expectations the fans had placed in them. On the other side was the sole surviving Chinese team in the year of the Chinese after having dominated in the Dota Pro Circuit and solidifying their status as one of the top teams of the season. OG accomplished the unpredictable by making it to the grand final through the upper bracket, although it was rarely a flawless victory as their series involved a lot of 2:1 wins. LGD, on the other hand, were intimidating in the precise and flawless method in which they sent the top contenders for the Aegis, Virtus.pro and Team Liquid, to the lower bracket.

Despite the fact that OG sent LGD to the lower bracket in the upper bracket finals, it was clear that was a very close series and would have probably gone in favor of the Chinese squad had it not been for the very final moments of the last game in the series. And in a best-of-five series, teams had plenty of opportunities to conform and adapt to their opponent's playstyles and drafts.

However, no one could have predicted the utter awe-striking, jaw-dropping miraculous series of games that fans were about to witness. For the first time since The International 2013, the grand finals went to a Game 5, a situation that makes the community happier than nothing else. What occurred at the Rogers Arena in Vancouver, British Columbia today, will forever be remembered as the greatest grand finals in the history of the game.

OG broke the curse of TI and denied the Chinese region their championship in the year everyone expected would be theirs. They also pushed the series to a fifth game, a rare occurrence, and an unexpected one, especially considering that 4 out of the 17 series played in the main event (except the Bo1 lower bracket rounds and the Bo5 grand finals) went to a deciding game 3. Every other match was a clear 2:0 victory, sparking thought as to how motivation and mental fortitude plays in the performance of players and teams in the high-stress situation that is The International.

Some curses still remained unbroken. The TI7 champions Team Liquid were denied their second Aegis of the Champions, proving once again that winning the biggest tournament in esports history is a feat far greater than any can accomplish. However, it is arguably a positive indicator as to the nature of the ever-evolving game that rewards even the underdogs. The pressure of winning a second TI remains far too great, even for a team as incredible as Liquid.

Right off the bat, OG showed off their confidence with out-of-meta picks and the resilience to come back from a deficit. Picking the signature Monkey King for Topias "Topson" Taavitsainen, they threw LGD off their guard, forcing them to improvise. However, LGD were clearly unprepared and picked Bloodseeker, who is in-fact considered weaker to Monkey King. It suggested that they were probably focusing their attention on shutting down Anathan "ana" Pham's Spectre and winning the laning stage.

They were successful at the latter, but the significant net-worth advantage they accumulated turned out to be deceiving. After the 20-minute mark, OG won team-fight after team-fight with brilliant saves on the Spectre and crowd control from the Jesse "JerAx" Vainikka's Earthshaker that they couldn't deal with.

LGD didn't lose their resolve after one loss, and instead focused on what went wrong in order to fix it. Snatching the Earthshaker from OG's claws and giving it to their 'namesake' captain Xu "fy" Linsen was the recipe for their victory. Despite giving up the IO+Gyrocopter duo, one of the most powerful hero combos in the tournament, they outplayed their every move.

Starting off with a strong laning stage, they propelled their advantage to greater heights without once getting overconfident and giving it up. The key to their success was shutting down Topson's signature Quas Wex Invoker, who ended the game with an abysmal 0-12-5 score. They hit back with their own out-of-meta pick with Lu "Somnus丶M" Yao's Kunkka who decimated the Invoker in the middle lane with his unique set of skills and combination of control and damage.

The third game in a series is often considered the most crucial to a team's success, especially when the score is tied. It puts the winner on a significant comfort and confidence level, as they are only one game away from claiming ultimate victory. And the one to do so was LGD, proving that the disappointment from Game 1 was long forgotten.

OG picked Lina in the second stage of the draft, an open pick that can either fill the core or support role in order to deceive their rivals. The strategy failed big time, as LGD read the situation perfectly and capitalized on the weak early-game of a support Lina. The star of the match was Wang "Ame" Chunyu's Weaver who went on a murderous rampage, ending with a 21-3-15 score, in part due to OG's lack of reliable disables. Even Topson's last pick Morphling couldn't carry his team on his shoulders and they were victim to another one-sided loss.

OG were back against the wall in the fourth game of the series. Losing this one game would mean the end of their run at the tournament and their dreams of the championship title. And it looked as though the pressure had got to them, as they hemorrhaged kills in the early game. They managed to recover and hold a decent net-worth advantage in the mid-game, but their greedy Quas Exort Invoker kept getting caught out due to his low mobility.

The 65-minute game was an absolute slaughter-fest, totaling in 107 kills at the end, as both teams kept making moves on the map to get a one-up. LGD turned the net-worth advantage in their favor, allowing them to comfortably siege two lanes of OG's barracks. The savior to come to OG's rescue was none other than Sébastien "7ckngMad" Debs's Axe. Another bold, out-of-meta pick that countered Ame's Morphling by design was the playmaker that gave us what many consider to be the best game of the series.

Pushing the match to a super-late game, they sent the casters into overdrive and fans on their feet as they took down lane after lane of LGD's barracks, equalizing the losses, and then gaining back their momentum. Before even claiming the series win, OG won the hearts of fans with their steady resolve and comeback victory that pushed the series to a deciding Game 5.

OG gave the fans a rollercoaster ride and heart-stopping moments in the final game of the series. Once again, they started from behind with a weak laning phase and found it hard to find pick-offs to follow up with objectives. However, they had none other than ana's Ember Spirit, arguably his strongest and most-winningest hero in both pubs and professional Dota, to carry them to victory.

They weren't shy of trying not one, but two quirky picks on their cores, drafting a Zeus for mid-laner Topson. LGD brought out their own unexpected pick with Yang "Chalice"' Shenyi's Batrider. The hero somehow continues to show up at The International every year despite staying largely absent throughout the professional season.

25 minutes into the game, OG found their opportunity and struck back hard. With the few necessary items on their cores, they wiped LGD over and over to make a fantastic comeback. It seemed to invigorate in them a new strength and confidence that could not be shaken, as it was now LGD's turn to make mistakes and falter under the pressure. Armed with an obnoxious toolset in the Zeus's Nimbus and the Ember's elusive mobility, they styled all over the Chinese overlords, wiping them one last time before the 'gg' was called and it was all over.

The production of the event kept superseding itself as we were blessed with an amazing after-show segment where the champions were interviewed. A huge crowd watched and cheered as they expressed their glee and ecstasy at achieving something they had only dreamed of.

The segment ended with the team popping champagne bottles and bathing in confetti before the screen faded out and we were left to reflect on what had occurred over the course of the last two weeks.

The 2nd place runners-up may have failed at winning the ultimate prize, but won the hearts of fans everywhere and left with a hefty sum of $4 million dollars to boot.

The professional Dota 2 competition will resume with the second season of the Dota Pro Circuit, starting with the qualifiers for the first Major of the 2018-19 season on September 15th.

The International 2018 playoffs take place starting August 20th. For the first time ever, The International is being held in Vancouver, Canada with a total of 18 teams competing. Currently, the prize pool is over a staggering $25 million.

Was this the greatest TI finals in history?