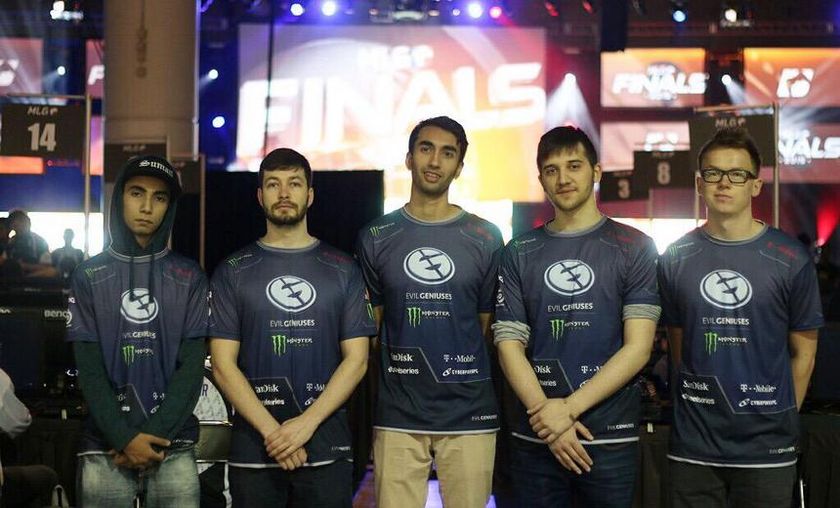 Evil Geniuses are your Summit 4 winners 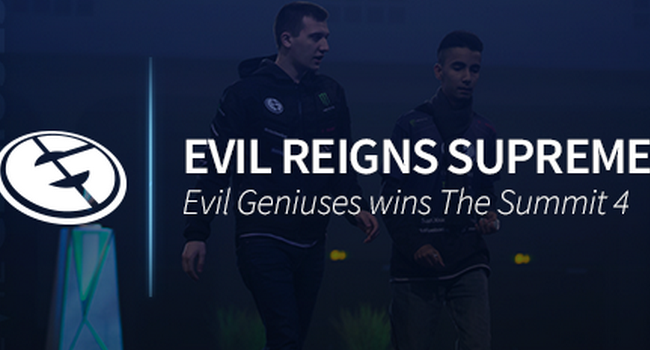 The tournament that brought together some of the best DotA 2 teams of 2015 in the cosy Beyond The Summit house to fight for the $114,857prize pool money has ended with Evil Geniuses claiming the first place for the second time in the tournament history.

The big surprise, Virtus.Pro advanced into The Summit 4 grand finals after a marvelous lower bracket run where they denied the top two place finish to some of the favorites of this tournament. EHOME, OG and finally Vici Gaming were eliminated by FNG and co and the start of the grand finals was looking pretty scary for Evil Geniuses as well.

A very focused Artsiom 'FNG' Barshak started the finals with speedy drafts in the first two games and took down EG in less than 60 minutes. In the first game of the series we witnessed a very rare occasion where Syed 'SumaiL' Sumail’ s Queen of Pain had almost no impact on the game while Artour 'Arteezy' Babaev was looking powerless on Windranger.

The next game looked even grimmer for the boys in blue as FNG was able not only to pick the SF for G again but he also secured the overpowered Drow - Visage combo. EG tried to respond with the signature Storm Spirit for SumaiL but Shadow Fiend’s right clicks were way too strong due to Drow’s aura and SumaiL was forced to abandon the mid lane really early. As broke as Storm Spirit could look in SumaiL hands (remember the DAC comeback of his SS?) it was not the case  this time and VP steamrolled EG in only 27 minutes with an epic last wombo-combo from Lil’s Disruptor ultimate on top of a SF Requiem of Souls.

After two games in which Sergey 'G' Bragin was given Shadow Fiend from the first pick and crushed the TI5 Champions with it, Peter 'ppd' Dager decided to let the Russians to pick it one more time although his team was one game away from losing the finals.

FNG didn’t hesitate to put G on SF for the third time and to go once more with the Drow - Visage on top of it. But this time around EG found the answer for it with a Templar Assassin for SumaiL and a last pick Bounty Hunter for the "Old Man" Clinton 'Fear' Loomis.

VP’s attempt to surprise their opponents with an unconventional Visage core and a support DkPhobos on Ogre Magi proved inefficient as both Arteezy (Gyrocopter) and SumaiL benefited a lot from the Bounty track kills and were able to out farm the Russians.

A five man Call Down from RTZ at the 32 minute mark in the Roshan pit wiped out Virtus.Pro and with Aegis on TA and Cheese on Gyro, EG were back in The Summit 4 grand finals.

The fourth game went into EG’s favor right from the draft as the Vacuum - Wall into Call Down combo was secured by ppd. Despite a Silencer last pick for Silent to mess with EG’s big spells the game was completely dominated by the Boys in Blue and ended up with a 2EZ for RTZ Rampage which pushed the grand finals into a decisive game five.

Last game of the night started with a very good reactive draft from ppd. A first pick Shadow Fiend from ppd forced FNG to come up with a different approach and also put the Russians in difficulty as both RTZ and SumaiL could have been assigned to the hero. A third Lich pick to negate the minus armor strategy of VP and a surprising Axe for Saahil 'Universe' Arora in response to DkPhobos’s Broodmother was followed by Timbersaw for SumaiL.

The hero that created havoc at Frankfurt Major worked once more as a charm for SumaiL who managed to find the first blood on Broodmother and bullied everyone on the map in his ganking rotations.

Because of a questionable decision to use Silent’s Slardar in a lot of early rotation that haven’t accomplished much for VP, the fishy fish carry fell behind in farm quite bad. Only ten minutes into the game he was struggling to find his items while Axe was already hungry for blood with his shiny Blink Dagger.

A game winning team wipe happened at the 33 minute mark in the EG jungle when VP tried to five man push the tier three tower. Although the end of the game was postponed up to fifty minutes, EG was in control of the map all the time and VP were forced to play from behind.

SumaiL’s perfect Timbersaw play along with impressive coordination between Axe and Vengeful Spirit (Blink- Taunt - Swap out) executed Virtus.Pro in the last game of the series and brought the second Summit title to Evil Geniuses who are the winners of both The Summit 1 and The Summit 4 LAN events.