HOT6.Heen: "The top teams are not unbeatable"

How are you so far?

I’m really good. Excited to be in Seattle.

You guys bootcamped in Korea prior to TI5.  What was the training schedule like normally?

Well first of all, it wouldn’t really be a bootcamp because we already live there.  We normally tried to scrim the SEA teams that were still active.  After the TI qualifiers we didn’t expect many teams to be active, but there are surprisingly many teams, getting ready for the next season.  We try to play at least two best-of-3s a day against as diverse of opponents as possible, and sometimes we would scrim Chinese teams, although not often.  There’s an issue between Korea and China about the latency, so it wasn’t always easy, but we try to widen our scope of how to play the game.

We discussed the possibility, for sure, right after the qualifiers, we were decided to go to Seattle, but eventually the plan kind of disappeared because we thought there would be a lot of trouble. First of all we don’t really know much about the scene here, so if we come here and we don’t have a babysitter to get us scrims and all that, we thought it might actually backfire on us. At home we’re more familiar with what kind of teams we can get scrims with, and we’re basically more comfortable there.

Before we get into the TI group stage questions, tell me more about your experience in Singapore. You guys won the qualifiers, and how do you feel, was it a tough qualifier?

I’d say we were pretty confident going into the qualifier, but as with any tournament or qualifier, you’re always nervous that you might choke or you might be upset. I think what helped about going to Singapore, more than playing on better ping was the fact that it really felt like a tournament. If you play at home, which a lot of teams could basically, I guess you’re not as focused, but going there and being in a LAN cafe, there were a lot of people watching… so that set us a good mood I think, so that we tried to play our best every single game.

What do you guys do after you win? Did you guys celebrate? I mean, two MVP’s went through, that was pretty impressive, the third team was Rave I believe and TNC after that. Do you think that Korean Dota is coming up and that it’s gonna start dominating the Southeast Asian scene now, and then after that maybe global domination? As per every single game.

I think Korean teams being dominant in the SEA scene has happened even before the TI qualifiers. I think after TI4, the Korean-based teams, the two MVP teams and Rave, they still have a lot to learn but through the KDL and being active in the scene, we caught up a lot and at the beginning of this year, I think we could safely say we had a lot of the stock of the top teams in the SEA scene. As for the future, I’m not sure, it’s hard to say because to get to this point, I’m sure our journey doesn’t end here, but you know global dominance is a completely different kind of adventure.

You guys added Jerax a few months before TI qualifiers. How do you guys approach him, and how keen was he to come to the team, and what kind of fresh things does he bring to the team?

I think, first, I have to explain that in Korea it’s hard to find new players and new talent, because our history of professional Dota or competitive Dota even is pretty short. Not many players are known and I guess hard to find new talent. We don’t have a large user-base and there aren’t many active teams to begin with. We naturally look to outside of Korea, and we wanted an English speaking player for sure. I think Black introduced me to Jerax, and we were a team looking for players and he was a player looking for a team, so we started talking very naturally about what kind of ideas we had about how to succeed as a team. You know, it happened very naturally after that.

Also explain to me how did that happen, and what kind of things does he (Black) bring to the team as well?

At the beginning of our new Hot6 roster, Black was one of our prospects, we tried to recruit Black, and obviously him leaving VG, a lot of teams wanted wanted Black on their team, and he had a lot of offers, but eventually he chose his path, and he couldn’t make it to Korea. But we still stayed in touch even though we were on different teams, sometimes talked about Dota. After his team failed to qualify for Seattle this year, he wanted to make the best of his time, and if he can’t be a player at TI, he wanted to be a coach at TI, so he could sort of live the hype as a player. You basically try everything you can to make your friends and teammates win.

So how is he as a coach? He’s normally a player, so what do you think about him as a coach?

When we first started, we talked a lot about what kind of expectations the team had for him as a coach, and maybe asked him what he expected as a coach of the players. One thing that he said that was very memorable was that he said he would be like a shadow. Like he wouldn’t be very obvious as a coach. Many people might imagine a coach to always be there and always watching, but he would be more like 90% quiet and observing and listen to our discussions. And when we hit some kind of rough patch and we can’t seem to find a conclusion, then he would just add his two cents, tell us what he thinks is the right thing to do and try to help us solve some issues. More than like a play-by-play coach, he’s more of a mediator in the team.

I think the popular opinion is that group B is weaker than group A. I mean on paper, I can see that kind of angle, but I don’t really think about it too much. We have three Chinese teams, er… it’s hard to picture which teams are in my group, but I think the overall impression is that we are capable of beating any team. You know, the probability of that might vary from team to team, but we’re confident that if we play well we can have a high placing in the group stage.

Have you scrimmed against any of the teams that are in your group right now?

We haven’t scrimmed much, we’ve scrimmed two teams I believe. Our team sort of has an honor code thing, so I can’t really disclose which teams we’ve played, but I can say after having played them, I think we had some kind of confidence.  Because for us, it’s kind of different, because it was really hard for us to scrim TI level teams from back home in Korea. So we were quite worried that the sudden gap between the teams that we’re used to playing and the teams that we would have to play here would be maybe too big for us to overcome. But coming here, I think, the games we played well, we found that everyone was just like a player, they’re not… 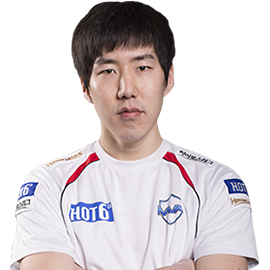 Yeah they’re not unbeatable. That kind of assurance was really good, that if we play well, we’re capable of beating anyone.

So you guys are confident that if you play well you can finish top four in the group stage?

Yes, I think that if we play well we can place top four in the group stages.

What do you think about the format this year, I believe it’s the TI3 format?  Eight upper bracket, eight lower bracket. So do you prefer this over the format last year?

I think I prefer this format over last year because last year it was like, too many games, and too many opponents. Also, I feel like last year was quite brutal, in that too many teams were just denied a second chance to the main event. This year I think is very straightforward. One thing that is very different from TI3 I think is the point system. So this year, winning 2-0 means a lot, because it’s 3 points for a win, 1 point for a draw, and 0 points for a loss… same as TI qualifiers. So every team’s gonna try their best to win every single game anyway. Towards the end of the group stages, there will be a lot of people calculating how many points they need, and all the scenarios. So it’ll be interesting and I’m mostly happy with the format.

No, they haven’t played any tournaments since the qualifiers. I can safely say they have gotten a lot better since the qualifiers, they improved more than us I would say. A brief evaluation of our MVP Phoenix team compared to us would be they would be more explosive, meaning they have very ups and downs. It’s more important for them to play their good game this tournament if they want to survive the wild card matches and proceed to the groups.

Would you have preferred if they come into group A or group B?

Well, I would prefer if they don’t come to our group. It would be much nicer if we didn’t really think of each other as competitors, but rather like teammates and brothers, and we wouldn’t have so much pressure. They know so much about us and we know so much about them… playing them would be super awkward.

Well you guys play each other a lot so that’s why you know, maybe. Assuming that you do have to face them later on, do you guys have like a special strat prepared for them, just specifically for them because you know them so well, right?

Well, that’s the thing, they know us so well and we know them so well, I don’t think… we’d have to think of one, a special strat. Otherwise we just have to play straight up Dota and try to be the better team.

So how excited are you for the main event? You were here as a wild card last year, I believe. This year you’ll be straight towards the main event.

It’s a different level of excitement from the last year, the wild card. I’m very excited. I mean, when I first started playing Dota in this organization, I only dreamed of going to TI… but here I am, and I have to be ready to play against the best teams in the world. There’s a lot of excitement as well as nervousness, all kinds of feelings, like before I go to bed I imagine the good scenarios and the bad scenarios. I am just overwhelmed with what could happen this tournament.

Alright, I think that’s pretty much all I have to ask today. So do you have any shoutouts you wanna give to family and friends maybe? Are any of them coming here?

No, unfortunately none of my friends or family can come here. I would like to make a shoutout to the former Hot6 members who’ve worn this… you know, my teammates who I’ve lived in a teamhouse with. But unfortunately they weren’t able to be with us here. I’d like to shoutout to Jubei, Raji and Musica.