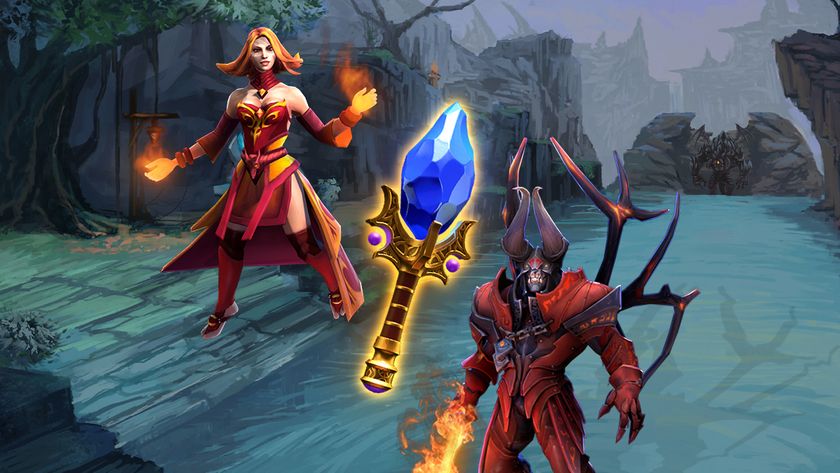 We take a look at how good the 12 reworked Aghanim’s Scepters from Dota 2 patch 7.32 are.

Dota 2 patch 7.32 was released a little under a month ago, and in the host of changes it brought with it, there were 12 reworked Aghanim’s Scepters. Here, we rank the new Scepters out of 10 to see which ones are worth spending the 4200 gold for, and which ones aren’t. The list of ratings starts with the Scepter upgrades that are the worst of the lot and proceeds in ascending order towards better ratings.

Grants new ability – Nosedive: Viper slams into the ground, disarming enemies in a 500 radius for 4 seconds, and splattering everyone in a 1200 area of effect with the effect of Corrosive Skin. Cooldown: 20s. Cast range: 300. Travel Speed: 500. Mana Cost: 75. Cast point: 0.3s.

Not a very good Scepter. Viper isn’t a hero that thrives going into a bunch of heroes – he wants to keep his distance as he applies his poison on multiple heroes on the enemy team. If you’re a position 5 Viper, you can play a suicidal role by going in, but you won’t have the gold for it. If you’re a position 2 or position 3 Viper, you could have the gold for it, but it would not fit in with the role. This is a Scepter that won’t see too much play.

Grants new ability – Reel In: Naga Siren channels up to 5 seconds, pulling all units affected by Ensnare in a 1400 range towards her at a speed of 150

It has application in very specific situations where reeling the target to a certain location will be good for a follow up ultimate like Black Hole or Winter’s Curse. For most games though, not an item Naga Siren will think too much about. The biggest benefit the Scepter provides, which it did in the previous patch as well, is that Ensare can target heroes who are invulnerable or sleeping. That’s where the value lies, when Naga Siren can use Song of the Siren and Ensnare an elusive hero before the song ends. But Reel In does not give it too much additional value.

Upgrades Shadow Strike: Shadow Strike initial damage is increased by 80 and is applied to all enemies in a 375 radius area around the target. When Shadow Strike ends or is re-applied to an enemy Hero, the target emits a Scream of Pain, hitting any nearby enemies. Doesn't trigger on illusions or on death.

If this triggered on illusions, it would have been one of the most useful Scepters in the game against heroes like Phantom Lancer and Terrorblade. But it doesn’t, and getting it is not a prudent use of gold. The numbers speak for themselves – in 80 Queen of Pain picks in professional games on 7.32, only 7 Aghanim’s Scepters have been purchased.

Reworked Scepter. Grants new ability: Drums of Slom. Beastmaster starts hitting his drums with ever increasing speed. Each strike deals 110 damage to enemies in a 600 radius, healing him and units under his control for 25% of damage dealt to heroes and 5% of damage dealt to creeps. Drum hits deal no damage and don't heal if Beastmaster is stunned or silenced. Duration: 6s. Cooldown: 40s. Mana Cost: 100

Is the Scepter worth the 4200 gold? In serious games, probably not. In the 32 Beastmaster pickups in professional games on patch 7.32, Aghanim’s Scepter has been purchased only twice. And it makes sense, because Beastmaster wants to prioritize items like Helm of the Overlord, Black King Bar, Blink Dagger and even Aghanim’s Shard, that help him play his role.

But is it a fun Scepter for pubs? It sure seems like it! Rushing Aghanim’s Scepter into Kaya and Sange or Ethereal Blade and going full magic damage can be a unique way to play Beastmaster.

Reworked Scepter. Grants new ability: Hitch a Ride. Centaur tosses an ally into a cart hitched behind him. While in the cart, the ally can still cast and attack normally, but cannot move independently or be targeted by opponents. Non-targeted effects can still affect the hitched ally. Increases the attack range of hitched melee heroes by 200. Mana Cost: 75. Cooldown: 60s. Duration: 8s. Cast Range: 300.

Visually, this is the most pleasing Scepter that will make you laugh at all the possibilities, like carrying a Crystal Maiden while she is using Freezing Field, or carrying away an Enigma after he Black Holes so that it cannot be interrupted. But in terms of game impact, it just cannot justify the 4200 gold cost. The previous Centaur Scepter was a factor in picking the hero. This one isn’t.

Meme potential – 10/10. Potential to make a significant impact in serious games – 2/10. Split the difference for the overall Scepter rating.

Reworked Scepter – Upgrades Black Hole: Deals additional damage during equivalent to 3.5% Max Health and pulls all enemies in the 1200 AoE with the speed of 175 units. Units being pulled in the additional Scepter radius can still move.

When the pulling of enemies was on the Aghanim’s Shard, it was a lot better as the gold spent wasn’t too bad. The new Scepter does also provide additional damage, but dealing damage in a Black Hole is not Enigma’s role. That responsibility falls on the other heroes in the team. In 68 Enigma picks in professional games on patch 7.32 till now, there have only been 3 Scepter pickups, which isn’t surprising, because Enigma’s gold is better spent on items like Blink Dagger, BKB, Wraith Pact, Refresher’s Orb and even Octarine Core nowadays.

Upgrades all abilities: No longer refreshes all of Clockwerk's abilities on cast and neither grants bonus Movement and Attack Speed. While Overclocking is active, all of Clockwerk's abilities are supercharged: Battery Assault damages and stuns all enemies within its radius. Power Cogs increase Clockwerk's Attack Speed by 250 while Clockwerk is inside. Rocket Flare has its cooldown decreased to 3s and shoots 2 additional flares to either side of the target area. Increases Hookshot stun radius and duration by 50%. When Overclocking expires, Clockwerk is stunned for 3s. Buff Duration: 13s. Cooldown: 50s.

Clockwerk was a popular hero in the last meta (still is in the current meta), and his previous Aghanim’s Scepter was one of the reasons. The refresh on all abilities was a very powerful tool, which was why it was nerfed in patch 7.32 to the current Scepter upgrade. For patch 7.31, of the 490 professional Clockwerk games, 84 saw Aghanim’s Scepter pickups (17.1% games). For patch 7.32, that has gone down with 4 pickups in 44 games (9.09%). With the Scepter offering lesser impact than it used to, spending 4200 gold on it for a support does not seem to be worth it.

Is the Scepter good? Yes. A 400 heal (600 with the level 25 talent) with a global cast range every 8 seconds is not bad at all. But can Chen afford it every game? Probably not.

Reworked Scepter. Reduces cooldown by 50%. When targeting an enemy hero, Pugna reduces their outgoing spell damage by 8% per second up to a maximum of 75% and increases his own, up to a maximum of 100%. When used on a Nether Ward the rate is 4%. Debuff lasts 8 seconds.

Pugna’s new Aghanim’s Scepter upgrade is definitely better than his old upgrade, which reduced the cooldown from 7 seconds to 0 seconds, which wasn’t worth the 4200 gold. The new one increases his magic damage output the more Life Drain is channeled. If channeled for the full 10 seconds, Life Drain damage goes up from 2340 to 3229 (after the 25% reduction). Nether Blast Damage for the time the buff lasts goes up from 255 to 454 (with Decrepify, it goes up from 408 to 726!).

But it’s a once in a blue moon occurrence that Life Drain will go on for the full 10 seconds. Most times, either the enemy hero will die before the duration ends or the channeling of the spell will be interrupted, so the gain in damage numbers are somewhere between the ones specified above. The additional damage is decent, but does not make it better than getting items like Kaya and Sange or Ethereal Blade and Octarine Core on a core Pugna. This could be a fifth or sixth item if the game goes long enough.

Reworked Scepter. Grants new ability: Primal Companion. Creates a Primal Split Brewling based on Brewmaster's current Drunken Brawler Stance. If the Brewling moves further than 1600 range away from Brewmaster, it is silenced and slowed by 50%. If the Brewling takes damage from heroes or hero-controlled units, a new one can't be summoned for 3s. If the created Brewling is killed, the ability goes on cooldown for 70 seconds. Only one Brewling can exist at a time. All Brewling's abilities have a doubled cooldown when summoned with Primal Companion. If Brewmaster uses Primal Split, the existing Brewling disappears. Cooldown: 20s. Mana Cost: 50.

Brewmaster’s new Scepter upgrade is definitely strong as it gives the hero the ability to summon a specific Brewling depending on the situation. But the old upgrade, which gave the hero two Primal Splits, was so much better that it led to the hero being viable. Especially in the late game with a Refresher Orb, Brewmaster would have four ultimates, and would basically be in the split form the entire time. That was slightly overpowered and had to be nerfed, which is bound to have an effect on his pick rate. But when picked, Aghanim’s Scepter is a good item on Brewmaster.

Upgrades Doom: Enemies within 325 radius from target also suffer the effects of Doom. Also allows it to be self-cast to affect enemies around caster.

One of the best Scepters to come out of Dota 2 patch 7.32. The new Scepter takes out so many variables that Doom typically has to worry about. No need to be concerned about Linken’s Spheres or Lotus Orbs, so Doom can self Doom himself and blink in close to the target. Also no issues with status resistance reducing the Doom duration – when self-cast, it will always last the full duration! And the self Doom does not silence or mute Doom, so he can continue to use his other spells and items.

But the self-cast does come with its own set of issues. A target that can get away from Doom can then have the entire set of skills and items ready to be used, unlike the case where Doom is cast on an enemy. So it needs to be a measured decision, on when it is better to cast Doom on an enemy and when it is preferable to self-cast it.

Not a Scepter that has caught fire yet (pun intended), but one with a lot of potential. For the last few patches, Lina has mostly been played as a right click hero, prioritizing items that increase her physical damage. But with the new Scepter, she can itemize more towards maximizing her magic damage output and still have the ability to farm insanely fast, while also having a way to get out of murky situations using the flying movement Flame Cloak provides. And with Flame Cloak on, agility and intelligence cores can be eviscerated even in the late game. Team Secret’s Michał “Nisha” Jankowski found that out the hard way when his Invoker disappeared off the map in the blink of an eye when caught out by Into The Breach’s Ondřej “Supream^” Štarha, who was playing Lina, in their TI11 qualifier game.

Dota 2 patch 7.32 is less than a month old, so players are still figuring out what is good and what isn’t. As the meta unfolds, we will get a better idea of which of the reworked Aghanim’s Scepters are good and which ones aren’t.

Do you like the reworked Aghanim's Scepters from Dota 2 patch 7.32?

Nigma Galaxy to miss The International second time in a row