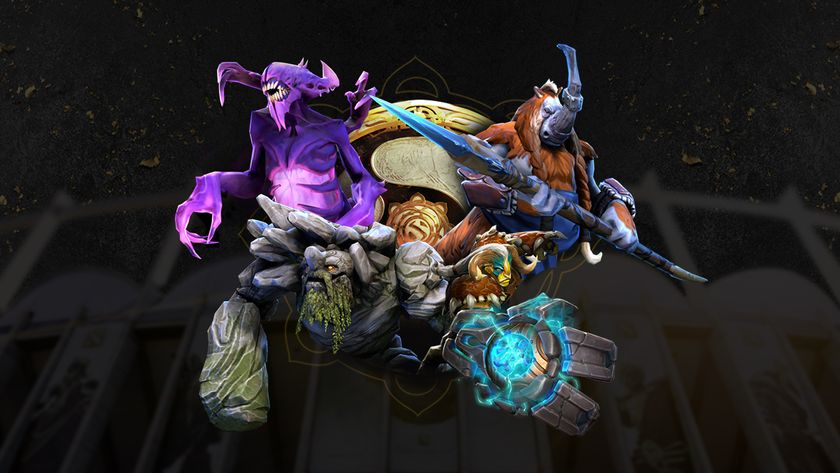 TI10 was an incredible event for Dota 2 as fans witnessed an incredible run from Team Sprit to lift the Aegis. Here, we analyze the meta for the tournament.

The International 2021 (TI10) is done and dusted and with its ending comes the vacuum created by the sudden absence of out of the world Dota 2 games. Team Spirit stunned the Dota 2 community by defeating the tournament favorites, PSG.LGD, 3-2 in the grand finals and took home the Aegis and $18.21 million. Even though there wasn’t a crowd present at TI10, it will go down in history as one of the craziest esports stories of all time, right in line with OG’s TI8 run.

But that wasn’t the only crazy thing about TI10. It also made history in hero picking, being the tournament with the highest hero picks till date. TI10 saw a total of 113 heroes picked at least once in the 194 games that were played, with only 8 heroes unpicked. Team Spirit’s carry, llya “Yatoro” Mulyarchuk alone played a total of 21 heroes in the 36 games Team Spirit played! While we wait for some news on the new patch or the new hero Marci, let’s take a deep dive into analyzing the TI10 meta.

All stats taken from datDota.

Most played heroes at TI10

Strength heroes had a field day (or field 10 days?!) at TI10, with the top six most picked heroes being strength heroes. Elder Titan was undoubtedly one of the standout heroes of the tournament, being picked in over one third of the games and managing to end up with a win rate of over 60%. One of the things the hero brought to the table was flexibility, being able to be used in any position from 3 to 5. But that was the story for a majority of the most picked heroes – they could be flexed and played in multiple positions. Flex heroes used to outmaneuver enemy teams in the drafts was something a lot of teams emphasized at TI10. The most flexible of the lot was Monkey King, who was played in all five positions. Seems he was doing a lot of yoga in the days leading up to the tournament. 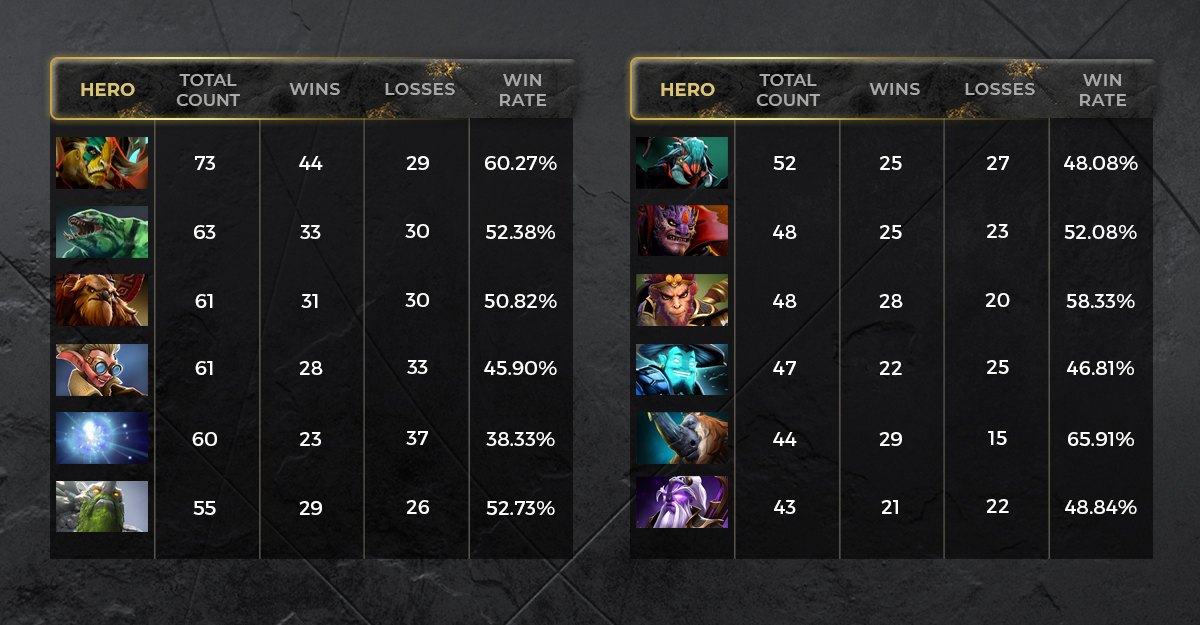 Most contested heroes at TI10

Even though a lot of heroes were played at The International 2021, there was a congregation of a few that were contested in nearly every game. The heroes that stick out the most are undoubtedly Tiny and Monkey King, being contested in over 95% of the games, which is difficult to fathom for a week and a half long tournament with nearly 200 games. The flexibility of the two heroes and the innate strength they currently possess made them threats and worthy of first phase bans in nearly all games. Even though the contest rate was high, Tiny’s win rate isn’t too impressive in the games he was picked. But at least it isn’t as bad as Io’s win rate, which began to fall in favor as the playoffs proceeded, owing to his low win rate. It is refreshing to see heroes from all positions and lanes making up the most contested list, pointing to the fact that the strong heroes comprised all positions and lanes and weren’t concentrated to one role. 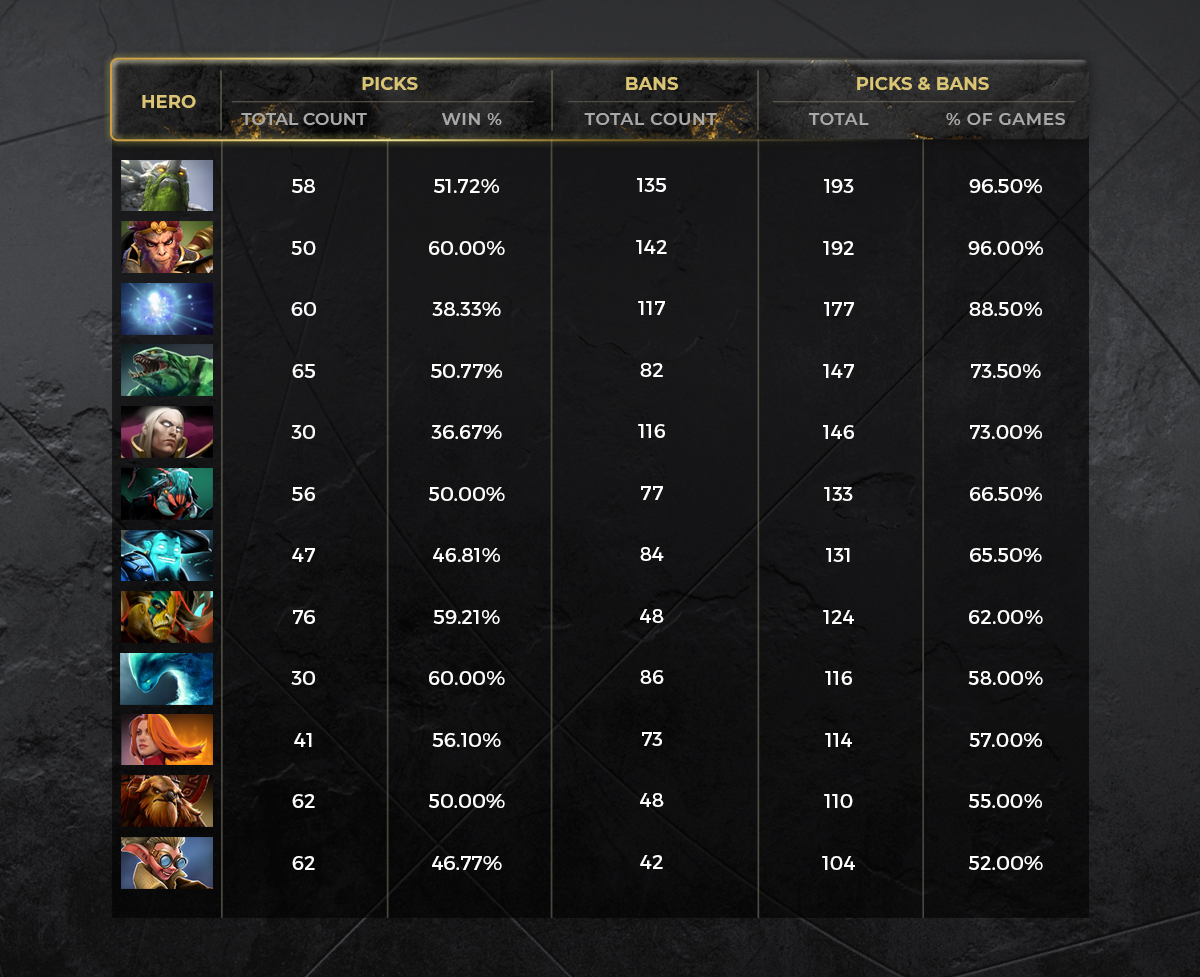 While looking at heroes with the highest win rates, some completely new names pop up. Bane, who isn’t a hero that makes a lot of waves in Dota 2 tournaments, takes the top spot in win rate with a staggering win rate of 78.12% in the 32 games he was picked in. Heroes like Bane, Ember and Doom were picked in very specific scenarios by only a small subset of the teams, but boy did those teams know how to use them! With Magnus, not a lot needs to be said. The hero didn’t start off as one of the more favored heroes in the group stages, but skewered his way to the top of the into the most picked and highest win rate heroes in the playoff games. He was picked in all five games of the grand finals between Team Spirit and PSG.LGD, and managed to secure wins for the team that picked him in four out of the five games. When teams realized the strength of his Aghanim’s Shard ability, Horn Toss, they started prioritizing the Shard and used the ability to perfection to terrorize opponents. Why the Magnoceros wasn’t banned is a question many from the Dota 2 community will be wondering about in the years to come.

Even in an extremely diverse tournament with possibly the highest hero picks to date, there are bound to be some who are left behind. Eight heroes never saw the light of the drafting screen, and these are probably ones who will get buffed in the next patch. It is a bit surprising that no one went for a cheese Meepo or Techies pick, especially considering PSG.LGD’s support Zhao “XinQ” Zixing is a pretty well known Techies player. And right in these heroes is the answer why Team Spirit won TI10 – no one picked Spirit Breaker. That was the simple answer!

Distribution of TI10 games based on time

Looking at the distribution of games based on game durations, the clear outlier is the 30-40 minute mark, in which the majority of the games seem to end. In that bracket lie 76 of the 194 games.

The 30-40 minute bracket is typically the place where most Dota 2 metas see the highest concentration. But the more interesting brackets are the ones adjacent to it, which give a concrete idea of how the meta is placed in terms of game speed. More than 44% of the games went over 40 minutes, whereas only 16.5% of the games ended before the 30 minute mark. This is a meta that is destined for longer games, where closing out the games isn’t necessarily the easiest thing to do, and there is a good potential for comebacks. It is just the kind of meta that is suited for back and forth TI games! 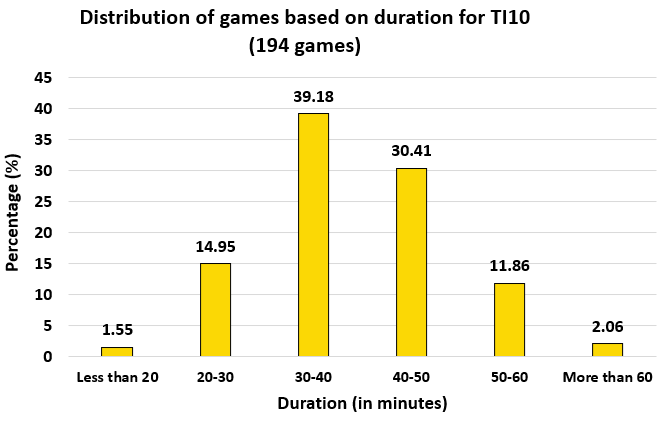 From a spectator point of view, TI10 was an amazing tournament. Even though a few heroes dominated the drafts (which is something that will never change in Dota 2), there was a lot of potential for varied hero picks. Things like Team Spirit’s Naga Siren Pick in game 1 of the grand finals or PSG.LGD’s Undying pick in game 3 and game 4 of the grand finals lead to totally different strategies and win conditions.

One of the hardest things for IceFrog and Valve to do is to get the TI meta to a place where it won’t be too fast paced and will be conducive for teams to try out a few unexpected things. With Dota 2 patch 7.30d, they found the perfect balance, for which they deserve a lot of credit. Here’s to hoping that the future editions of The International are blessed by metas like the one we got to witness at TI10.

Did the TI10 meta make for an enjoyable tournament?