In the third of this five-part series, we take a look at the five best hard supports in pubs from the first month of Dota 2 patch 7.29.

In our exploration of the strong pub heroes of the current Dota 2 meta, our journey has brought us to our third destination. We already took a look at the heroes best suited for the offlane and mid lane for the current meta. Here, we take a look at the five best position 5 supports from the first month of Dota 2 patch 7.29 from high-level pubs.

The heroes have been picked as the best-performing ones from the Divine and Immortal brackets. This data is as per Dotabuff and has been analyzed for the past month, so it well and truly reflects the games from patch 7.29 only. The choice of heroes has been made from a combination of high pick rate and high win rate heroes.

Ancient Apparition is not only the position 5 support with the highest win rate in top tier pubs, but he is also the hero with the second-highest pick rate after Grimstroke. Traditionally, Ancient Apparition has been a counter pick hero because of Ice Blast. Heroes like Alchemist, Huskar and Morphling just can’t have a game if they keep getting hit by Ice Blast over and over again. But in patch 7.29, the hero has become a good early pick because of what his Aghanim’s Shard brings.

The Shard upgrade causes Ice Vortex to deal 40 DPS and reduce 20 attack speed. The skill has a 4-second cooldown and with the recent buff, had the mana cost reduced from 85 to 70, meaning it can be spammed all over in the area where a fight is occurring. It can also be effectively used to cancel blink initiations from the shadows on heroes like Earthshaker or Sand King. This, of course, is on top of the fact that Ice Vortex reduces magic resistance and movement speed by 30% (36% with the level 20 talent). In the 114 games in which Ancient Apparition has been picked in professional games on patch 7.29, an Aghanim’s Shard has been purchased in 58 of those games. The maximum travel time on Ice Blast was also recently reduced from 2 seconds to 1.75 seconds (patch 7.28), which makes the skill slightly easier to land over longer distances.

Bane has always been a good hero against position 1 heroes like Lifestealer and Juggernaut, the carries with a built-in magic immune ability, as Fiend’s Grip counters that perfectly. But of late, Bane is gaining popularity for the buffs he has received in the last two patches – 7.28 and 7.29. In patch 7.29, his Aghanim’s Shard was improved to make Brain Sap an AoE ability around the targeted hero, which is quite good, considering it is 300 pure damage. If you can stay in the shadows and get a couple of Brain Saps off in fights, not only is it good damage, but it is also a way to isolate the illusion heroes from their illusions.

A change from patch 7.28 that has made him a counter to HP restoration dependent heroes like Alchemist and Morphling, or even Huskar, is the fact that the new Enfeeble reduces health restoration by 55%! That is a huge number. For context, Shivas Guard reduces it by 25% and Eye of Skadi by 40% and both are considered great counters to Alchemist. With this new ability up his sleeve, Bane can make life hell for such heroes, and gives players another reason to pick him.

Winter Wyvern can be the perfect counter to team fight AoE ultimates that last for a long time, like Black Hole or Chronosphere because of Winter’s Curse. The heroes issue is, it can be weak in the lane and take a beating. Reduction of the Arctic Burn cooldown helps with that, as it can enable Wyvern to dish out some harassment without pushing out the lane (which Splinter Blast does).

But a significant improvement for Winter Wyvern in the 7.29 meta is in the healing department. Wyvern had the level 10 talent buffed, going from +1% Cold Embrace Heal to +1.5%. Pair that with the cooldown reduction from the Aghanim’s Shard, and Wyvern has a 190 + 26% heal every 10 seconds. For a 2,500 HP hero, that’s a heal of 840 every 10 seconds. Throw in the Holy Locket and that is increased to 257 + 35.1% (that’s a heal of 1,134 for a 2,500 HP hero). The sustain is just crazy and while playing against a lineup with primarily physical damage, it can drive the opposition insane. The Shard Splinter Blast originating from the Cold Embrace target is an amazing way to push out lanes more effectively – Cold Embrace a creep and send a regular Splinter Blast along with it. The two Splinter Blasts combined are enough to clear an entire creep wave. 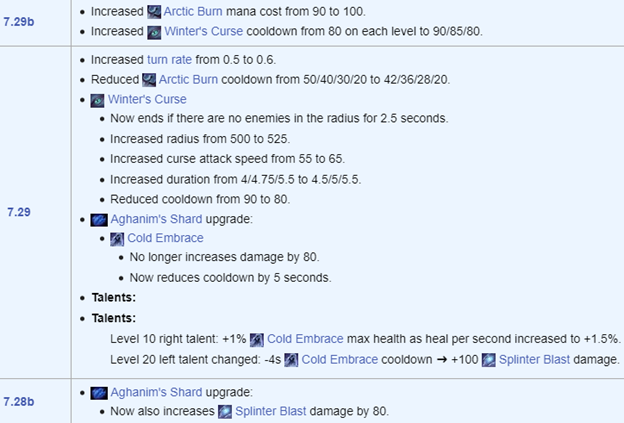 Ogre Magi has actually had a few nerfs thrown towards him in the last couple of patches, but there are probably two buffs that make Ogre strong in the current meta. One of the buffs is that he has a 1-second reduction to the Fireblast cooldown at level 10 (from 8 seconds to 7 seconds, 12.5% cooldown reduction). Multicast already makes the skill a very high damage skill, and a lower cooldown is always welcome on it. The second buff is the buff to Ogre’s Aghanim’s Shard, which gives him Fire Shield, a skill that provides 85% damage reduction on the next three attacks. The beautiful thing about it is the fact that it is also affected by Multicast, so using it during a team fight will provide a good amount of damage block for multiple teammates, or even towers. Towers with Bloodlust and Fire Shield on them (and even Glyph maybe?!) are terrifying to deal with, and the newly gained skill is a bonus while defending the high ground.

Warlock is one of the breakout heroes of patch 7.29. He’s so good in the current meta, that a paragraph won’t suffice for him, and an entire article had to be dedicated to the cause. From a better Aghanim’s Shard that makes Shadow Word AoE, talents that make the skill stronger to a buffed Holy Locket, which has become a core item on Warlock, the hero has reinvented himself as a prominent healer and lane pusher. Just as in high-level pubs, Warlock has been one of the higher picked supports with a high win rate in Season 2 of the DPC Leagues as well, especially in North America and Europe.

Which of these supports feels stronger right now?

Ancient Apparition
Thank you for voting!
Warlock
Thank you for voting!
Siddharth “Gopya” Gopujkar
A Mechanical Engineer who is as interested in the mechanics of DotA 2 as every machine he studies. Pursuing his Master's at the Michigan Technological University.
Share Tweet
70 people reacted to this post

ESL One Summer 2021 event to come right after the AniMajor