In the second of this five-part series, we take a look at the five best mid heroes in pubs from the first month of Dota 2 patch 7.29.

As the meta around Dota 2 patch is settling, the stronger heroes are becoming more and more evident by the day. What works in professional games doesn’t necessarily work in pub games. We already took a look at the heroes best suited for the offlane for the current meta. Here, we take a look at the five best mid laners from the first month of Dota 2 patch 7.29 from high level pubs.

The heroes have been picked as the best performing ones from the Divine and Immortal brackets. This data is as per Dotabuff and has been analyzed for the past one month, so it well and truly reflects the games from patch 7.29 only. The choice of heroes has been made from a combination of high pick rate and high win rate heroes.

Broodmother featured as one of the top offlane heroes for 7.29 as well, and it seems her influence is not limited to that lane. Even though the revamped Brood has found herself back in the offlane after a few years, the mid Brood is still a strong hero in the right circumstances, garnering a win rate of nearly 62%. The hero won’t be played in the same way as before, because without the early Spiderlings, pushing out the lane and jungling might not be the best way to play the lane; although it can be a fall back for bad laning matchups. With her early Insatiable Hunger, Broodmother can actually go head to head against melee heroes or use it to      sustain against heroes with burst damage. The mid lane does get her to level 6 the quickest, which lets the hero start her spider shenanigans early in the game.

There are a  couple of interesting things to note about the new mid Broodmothter. The first is that previous lane counters like Tiny and Kunkka, who had the potential to instantly wipe out Broodlings, are no longer counters. The matchups in mid have all changed. The second one, is the fact that even though she has a high win rate in top tier pubs, none of the professional teams have picked up Brood for the mid lane in Season 2 of the DPC Leagues.

Invoker’s biggest buff for patch 7.29 has been the fact that he gets stats from Quas (strength), Wex (agility) and Exort (intelligence), instead of getting it from using the +2 stats increase  option at every level like the other heroes. Most heroes get the +2 stats after all skills have been maxed out, meaning the first point in stats comes at level 17. So even though the stat gain is approximately the same (Invoker gets two more of every attribute), the benefits start rolling in from the first level! This makes the hero stronger in the early stages of the game, especially in the laning stage. A two point increase in strength with Quas guarantees an additional 40 HP per level, which is huge in the laning stage. May it be Quas-Wex Invoker or Exort Invoker, the hero is bound to get at least a couple of levels in Quas early game, which makes him harder to kill in the laning stage.

According to Dotabuff, four of the most popular Invoker builds are for Exort Invoker. Quas-Wex Invoker did get hit by a bit of a nerf when the attack speed with each point of Quas was reduced, and the new Aghanim’s Shard upgrade for Invoker benefits Exort Invoker. Well, it is summer, so it makes sense that Exort Invoker is the way to go (unless you’re in the Southern hemisphere; then it doesn’t make sense).

Templar Assassin is a snowball hero, who needs to get good timings on her Blink Dagger and Desolator, or she can feel extremely underwhelming. With patch 7.29, she got a number of buffs for Meld, having its mana cost and cooldown decreased and damage increased. It not only helps her fight better in the early game, but it also helps TA get the clutch last hits and jungle a lot easier, propelling the hero to those two key early items. Other than that, her talents have also been buffed, which doesn’t hurt at all. While Templar Assassin has been a dominant force in pubs with a win rate of nearly 53%, she’s doing even better in professional games on patch 7.29 with a 57.41% win rate (54 games, 31 wins).

Although TA’s Aghanim’s Scepter isn’t one that is commonly used, 4Zoomer’s mid player, Niko “Gunnar” Lopez made a strong case for it in one of his pubs (even though he was a low-rank game in comparison to his skill level). The mana cost and cooldown for Psionic Projection have been reduced, and Gunnar made brilliant use of it. He got an Aghanim’s Scepter as his first major item and used it to make instant appearances anywhere on the map. It gives TA the ability to play like Spectre – keep pushing out a lane or farm neutral creeps and show up when a fight breaks out. All the team needs to do is take a fight near the places where Psionic Traps have been set up. It is perfect for Roshan fights, as it also gives vision inside the Rosh pit. The Scepter ability can be used similar to Ember Spirit’s Remnant as well – put down a trap in lane or in the jungle, go home to heal up or pick up an item, come back. It is difficult to make a case for it instead of Blink in big games, as Blink Dagger costs half of Scepter and can now also be upgraded to Swift Blink later on in the game. But this Scepter feels like the typical lead girl in a teen movie, who is wearing glasses throughout the movie, but once she removes them, BAM! She’s the most beautiful girl in the world. Another small buff for Psionic Projection, and Aghanim’s Scepter just might become a staple item for Templar Assassin. According to Dotabuff, even though Scepter isn’t the most commonly bought item on her, it has a 56.17% win rate when it is purchased (in games from the last week). 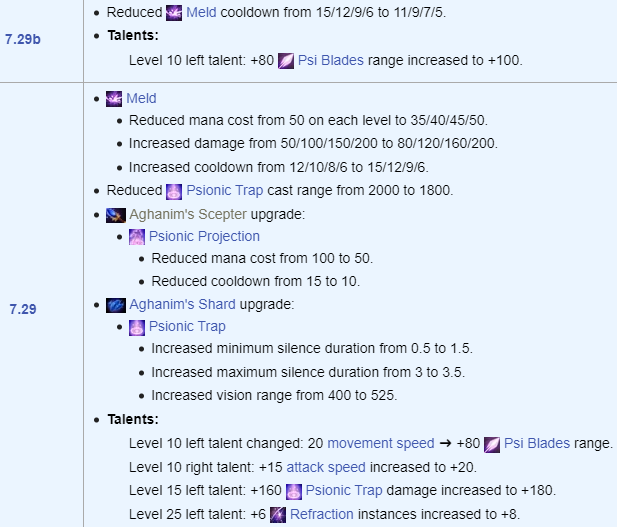 Tinker has been out of the meta for a long time (no one’s complaining, right?!), which has resulted in him getting regular buffs for the last few patches. All of them combined have made him a viable hero in the right situations in top-tier pubs, even though he has been barely picked in Season 2 of the DPC Leagues. A new weapon in his arsenal has been his reworked Aghanim’s Scepter, which targets who get hit by Laser 20% smaller in size and reduce their HP pool by 20%. Additionally, it bounces to one other target and is stackable. This is a very useful tool to take down tanky targets with a lot of HP. A hero with 4000 HP, that gets hit by the laser twice, will be reduced to 3200 HP with the first hit and 2560 with the second hit. The debuff may last only 6 seconds, but that is more than enough time to do some heavy damage to targets.

Huskar’s strength in this meta comes from a combination of two things: The multiple small buffs he received in patch 7.29 and the buff to Armlet of Mordiggian. It doesn’t matter how good or bad Armlet of Mordiggian is, if there is one hero who is guaranteed to make it as long as it has the Unholy Strength active, it will be on top of Huskar’s purchase list. And when it gets buffed, all the better for the Sacred Warrior.

His Aghanim’s Shard also received a prominent buff in patch 7.29, and even though Aghanim’s Scepter was buffed in patch 7.28, players are beginning to realize its full potential just now. In the past week, it was the eight most purchased item on Huskar in pubs, and nearly had a 70% win rate! With the 300 increased range on Life Break and the 3-second taunt, Huskar can just jump on the back lines and obliterate disabling heroes like Lion and Shadow Shaman, who make life difficult for him. Seeing domination, the hero was pulled back a bit in patch 7.29b with a few nerfs but still remains to be a good pick for the mid in the current meta.

Unlike offlane or support heroes, mid heroes aren’t typically picked early on in a game just based on how good a hero is (unless the hero is completely broken like Beastmaster before his recent nerf). While the heroes mentioned above are good, it is always prudent to look at what heroes the enemy has and even better if you are aware of the mid matchup before picking your hero. As dominant as they can be, picking a Tinker into a Clockwerk or Spectre or a Huskar into an Ancient Apparition, is an easy way to lose MMR and get reported. So while you take note of these heroes, also be aware of the circumstances before finalizing your pick for a game.

Quas-Wex
Thank you for voting!
Exort
Thank you for voting!
Siddharth “Gopya” Gopujkar
A Mechanical Engineer who is as interested in the mechanics of DotA 2 as every machine he studies. Pursuing his Master's at the Michigan Technological University.
Share Tweet
33 people reacted to this post