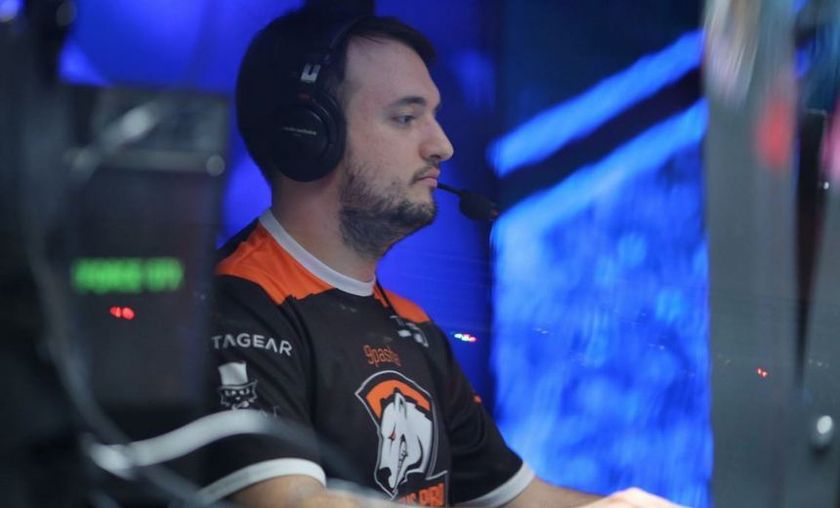 TI 7 Interview with Virtus.Pro’s 9pasha: “We are not in our best form” 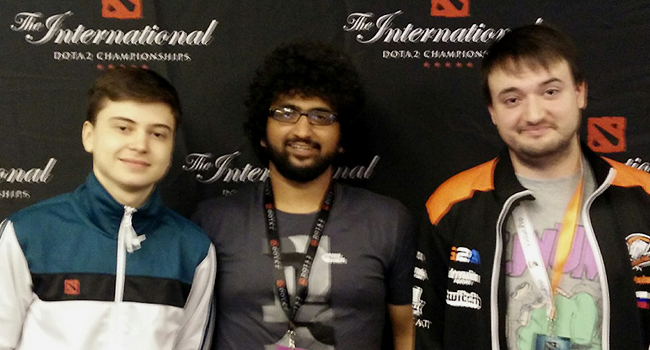 During the media day in Seattle, we had the chance to sit with Pavel '9pasha' Khvastunov and talk about VP’s run so far at The International 2017 and their confidence going into the main event. He’s been carefully “supervised” by his teammate No[o]one during the entire conversation we had, and I must say, talking to these guys was really refreshing. Both Pasha and No[o]one were a true energizer in a very long media day. Very relaxed and easy to talk to, despite both of us having strong accents, Pasha made me understand the CIS Dota spirit better and see where all that passion displayed in a Virtus.Pro game comes from. Here is how our chat went:

Congrats for the upper bracket seed! It was a tough run for you guys in the group stage, and especially that last game, against Invictus Gaming, where it was actually decided on which part of the playoffs bracket you will end up. What are your thoughts on that clutch last game?

We had a lot of pressure on us going into that last game. We already knew that we needed to win it to avoid any tiebreaker. We really didn’t want to play a tiebreaker against OG, it really isn’t the best idea to let your fate be decided by a tiebreaker. So, we tried to draft comfortable heroes in that game and play our best with them. But the game was really hard, at some points we thought we were going to lose it. We were communicating and trying to find out ways to get back into the game. We ganked Necrophos a lot, now looking back at that game, I really don’t know why we focused so much on him, but when we were playing, it made sense and killing him I think was what kept us in the game.

After we finally killed him, it boosted our morale and we had some really good teamfights. The initiations we had were also very good and everyone wes feeling it so we won.

Alright, so now you will play against LGD Gaming in the first series in the upper bracket. You guys played them recently, at Summit7, they beat you in the upper bracket there, then you eliminated them in the loser finals. How do you feel going up against them once again, but this time on the TI 7 stage?

We remember both series that we played vs LGD at Summit perfectly. We will try to repeat some of the things from those games, but with a little bit of a different style. We know how they play, we know what they did in the group stage, so we will take these days days off to better understand what we need to do on Tuesday in our game against them.

After Summit 7, LGD went to MDL and won it all, do you think they changed their play style since Summit 7? Do you think they are much stronger now, as compared to what they were at Summit?

Yes, they are definitely better. They do way fewer mistakes and that’s why we need to figure out how to play against them now.

Looking at how the group stage matches went overall, which teams do you think are the strongest going into the playoffs?

Everyone at Virtus Pro, not just me, thinks that Team Liquid are playing the best Dota of their lives right now. Evil Geniuses are pretty good too, but Liquid, they are definitely the team to beat here. We scrimmed with them for this TI and I must say that we never seen them play so good before.

I spoke to other players today and seems like a lot of teams are looking up at LFY. What do you think about them, are they indeed a threat for everyone here?

Unfortunately, we don’t get chances to play against Chinese teams, other than when we meet them at LANs, but based on what we’ve seen so far, all the Chinese teams look like they have a similar play style. They have identical ideas about how to win a game. The only difference between them is that some have a few, others have one or two specific heroes they play very good and we will try to play around them, but the teams are in many ways very similar.

Speaking about similarities, and how a region has its own style, let’s go a bit back, on the time when you and No[o]one were playing for Vega Squadron. What changed since you guys played for them, why is Virtus Pro stronger than Vega, what makes the difference between Vega and VP?

First of all, we are better at VP, because back at Vega I was playing carry and that made me lose motivation. That Vega was the worst team I have ever seen in my life *both him and No[o]one laugh*. No[o]one was playing mid at Vega as well, but he was so f***ing bad, but now, after he joined VP, he is the best midlaner in the world, what can I say.

at Vega I understood that carry is not my role

Do you enjoy playing offlane more than carry?

Yes, of course. At Vega I was playing carry because we had no other choice, we had Mag in the offlane, so yeah I had to take the carry role, but after a few months of playing with them I started to regret my decision. It was too late to make a change, so I had to try to do my best there, but it didn’t work out for me. I guess you could say, that at Vega I understood that the Carry Role is not for me.

Ok, I’m glad that you found your role and that you enjoy playing it. I would like to ask you about the post Kiev Major True Sight controversy.

Oh I’m so glad that the episode has literally nothing of me in it.

Yeah you and s4, both offlaners, both with technical issues during the footage

But what about the whole episode, do you think that VP was misrepresented?

Maybe if you would edit all that footage only with VP, and don’t juxtapose it with another team, we would look like, I don’t know, a bunch of friends, jocking around, living in the moment, a team that is passionate. But when you take that footage and place it next to OG, who are nurturing and soothing their midlaner, making him not feel bad for some playmaking mistakes he did in a game, all the positive speeches ”oh Anna, don’t worry we are with you, we are a family,” and then our team and our guys, who speak their heart, who let it all out, the frustration and anger and yell after a failed gank or something, who swear when they feel like it, then yeah, VP will look like a bad mannered team. But in the end it’s fine, it’s about how you choose to look at that episode, everyone takes what they want or what they think they got from it.

We are still not in our best form. We try to play better, but we still have some problems

Yeah, I see what you mean. Ok, let’s come back to this TI, where VP are regarded as one of the favorites. Does this place extra pressure on you guys?

A little bit, yeah. Especially that we had some issues, some hard times during the bootcamp for this, and I think we are still not in our best form. We are trying to play better, but we still have some problems, for example, I think that we were playing much better at the Summit than we are currently doing here. So, yeah, although we are here in Seattle already, we still have things that we need to fix.

Is the 7.06 patch, the fact that you have no shrines at the beginning so the offlane got a bit more harder, something that affected you? Is the current meta suiting you, do you like it?

I can’t say that I don’t like it, but for the offlane, I don’t know, now you have a lot of what used to be offlane heroes being played as supports, the shrines change made the offlane much harder, a lot of things have changed since then. Before 7.06 it was very comfortable to play as an offlane Batrider, but now a lot of teams are using it as support, and I don’t know, to me everything seems  a bit more difficult. Drafts are harder to read now, even if you have something in mind with a first pick hero, you can so easily get counter-picked and so on.

How about the new Majors and Minors system for the next season, do you think it will be good for the competitive scene?

Yes, it’s going to probably be very good for all the teams, for example, your invite to The International will not depend on one Major performance anymore and that’s something amazing. At the same time I feel like there are a bit too many LANs scheduled. It might oversaturate the viewership and people might lose interest in following a team throughout so many events. But I might be very wrong on this. Anyway, I'm very excited to go into the next season.

Alright, we will wrap up here, thank you for taking the time to speak to us, any shoutouts you would like to do at the end of the interview?

Shoutout to everyone, who is following us, and cheering for us, and shoutout to all the CIS fans! Thank you guys for being behind us every time!

Do you think that Virtus.Pro will make it to the grand finals of TI7?