“
There comes a moment in every life when the Universe presents you with an opportunity to rise to your potential. An open door that only requires the heart to walk through, seize it and hang on. The choice is never simple. It’s never easy. It’s not supposed to be. But those who travel this path have always looked back and realized that the test was always about the heart. ...The rest is just practice.”-Jaime Buckley in "Prelude to a Hero"

Team DK is one of the most storied teams in Chinese Dota. As the Champions of WPC-ACE League 2013, G-League 2013,  and StarLadder Season 9, DK have a lot to prove coming into The International 2014. With their star-studded lineup and having proven their mettle in both domestic and international tournaments, team DK are arguably one of the favourites going into this year's International. 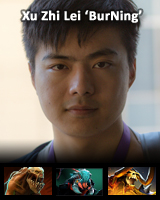 Established in 2010, Team DK's original roster held both LaNm and Super, but were unable to make any headway. It was only during the Great Chinese Shuffle of 2011 when they acquired both KingJ and, more importantly, BurNing, from EHOME that they started to shine. Since then, BurNing has become the sole mainstay of the DK team, with an almost annual reformation centered around their prolific and legendary carry player.

Participating in The International 2012, they fell to eventual champions Invictus Gaming, and finished fourth. At The International 2013, they fell short of the expectations placed on them, despite being the first team to take a game off Alliance the entire tournament, on the back of BurNing's signature Anti-Mage. They eventually crashed out to Orange after the then longest competitive match on record against iG.

“
I don't really care (about Na`Vi), I like my hot chocolate.” - iceiceice at MLG Columbus

The true story of this iteration of the Dota Kings, however, begins post-TI3 where everyone on the team was given the boot except for BurNing. Citing his inability to live up to his fans' expectations, BurNing put his post-TI3 retirement plans on hold to recreate DK. He brought in LaNm and retained MMY from the previous iteration of Team DK, while also courting the likes of Mushi. Mushi eventually convinced DK to recruit the other standout SEA talent iceiceice as well, forming what many called the ultimate dream team. Featuring some of the most standout players in Eastern Dota history, this was a team that had extreme amounts of potential, experience, and an unquenched hunger for tournament titles.

This DK team surged to giddy heights in their post-creation phase, going on an 18-0 run in the WPC-ACE League before facing a major setback with the arrival of 6.79. Their shaky play and inconsistent drafts led them to shuffle drafters between Mushi, BurNing and LaNm, a problem that has continued to plague them every patch. In spite of this, DK were able to place second at MLG Columbus, losing out to Cloud9 in a close series while dealing with their jetlag. 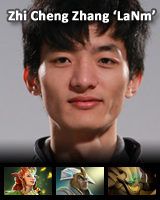 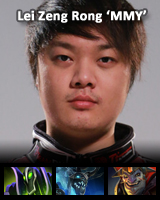 Since then, however, DK have gone on to shrug off all the naysayers and their somewhat disappointing performance in the past, consistently performing well in almost all the competitions they entered. In the past 9 months, they have won five tournaments and placed second in another four. Some of their tournament victories have become things of legends, such as their comeback in the 2013 edition of the WPC-ACE League, where they came back from 0-3 to win the series 4-3. Credit has to be given to their coach, Penny '71' Tang, who had previously coached the unbeatable EHOME team back in 2010, which had included KingJ, BurNing and MMY within its ranks. The fact that the players have credited their victory to him is telling of his importance and impact upon the players themselves.

“
I'm very glad that I did not retire, in half a year we have attained results that I had not expected. I would like to thank my teammates for that.” - BurNing at StarSeries Season IX

More recently, controversy has surrounded the team after accusations surfaced of a training boycott conducted by the other Chinese teams, as well as a string of poor results in the aftermath of 6.81. Losing their natural touch and finesse, DK have looked unconvincing in the past month or so, until their trip to Los Angeles last week. Despite shaky performances at the MarsTV League and failing to defend their crown at WPC-ACE 2014, they still managed to clock an impressive second at The Summit, pushing the Grand Finals to the full 5 games.

With five championships and four second positions out of the 13 tournaments they have entered since their inception, DK have proved that they can compete with the best, and are in pole position to do extremely well at The International 2014. 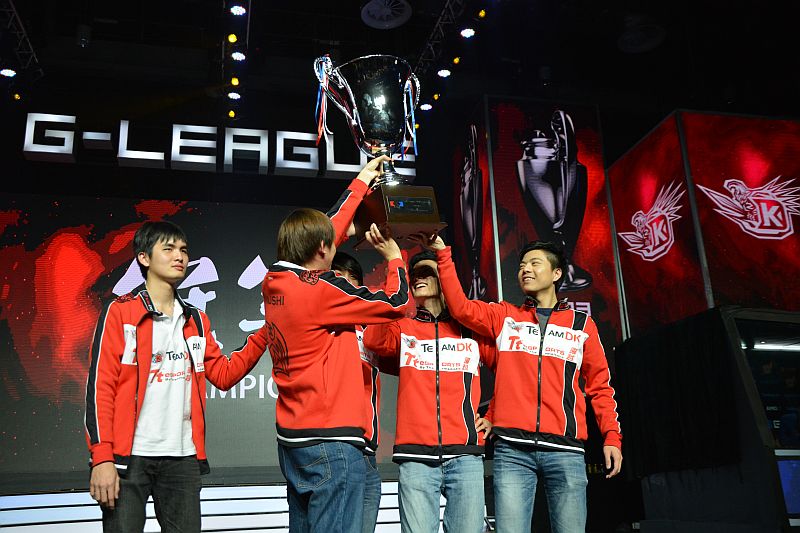 At their core, Team DK is a team that is marked by their experience, flexibility, and versatility. With an average age of 25 going into this year's TI4, their history in competitive Dota has given them experience through multiple metagame shifts as well as the ability to play different positions. Some liken them to the Mushi-led Orange of TI3, which saw their three cores interchanging roles often, allowing Mushi to clock 17 different heroes over the course of that tournament. At the same time, we have BurNing, whose Dota 1 days featured his precise jungling Chen; LaNm, who has literally played at every position competitive in Dota 2; iceiceice, who previously played support for Scythe, Mid and/or Carry for Zenith; and MMY, who was once the best solo mid in the world.

With this kind of competitive experience in Dota, what the players bring to the table are more than just personal skill - they are a team that are able to play anything, do anything, and execute anything. They have drafted a Sand King - Io support duo for Relocate-Epicenters, they have ran support Meepo that transitions into a carry, they have even gotten BurNing his first competitive win with Chaos Knight.

As such, DK are a team to watch from the start: their game is defined by their draft, which are unfailingly methodical and have a plan of action behind them. They will win their lanes, and pressure forward in the mid-game, never afraid to take fights. When they fall behind, they have a plethora of stalling tactics and strategems that have seen them come back from 15-20k exp and gold deficits. 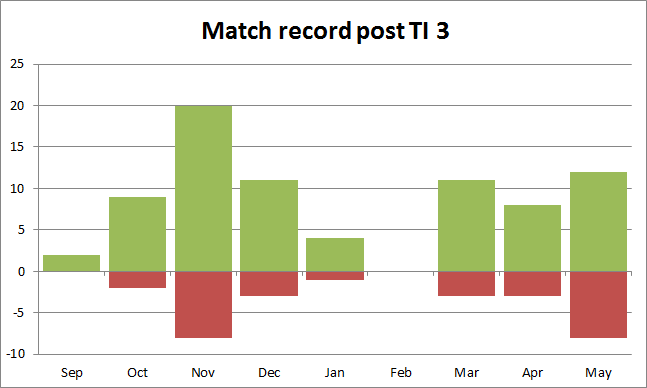 The above graph highlights DK's progression since their formation after TI3. What is easily visible is the way 6.79 hit DK's performance back in November, when their performance took a huge dip, as well as a couple of losses in December which included their trip to MLG Columbus. In spite of that, they have managed to continue doing well with good winrates in March and April, but yet again meeting another stumbling block in May with the arrival of 6.81. Will they continue to do well in June and July? They should, as long as Icefrog decides not to release a new patch again this close to The International. 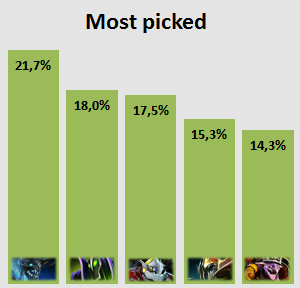 In the meantime, DK's picks in the past year are pretty notable. They have picked Visage a lot, giving testament to the strength of the hero back in the 6.79 and 6.80 era, where he was a first-pick hero in most of China.

Their other noteworthy picks are heroes for iceiceice - Clockwerk and Timbersaw. Iceiceice's Clockwerk is of legendary status, getting solo kills against the likes of Weaver and Lifestealer in 1v1 matchups. Also impressive has been theTimbersaw, which can be summed up in this video clip of him in a pub match.

Looking at these five heroes, they basically characterise DK's play - laning stage dominance and space creation for BurNing to farm up a storm. The Nyx, Clockwerk and Rubick are top tier initiators which DK love to ensure that they always have the advantage in the teamfight, and their ability to splitpush with Visage to create even more space makes Visage an extremely versatile hero for their playstyle. 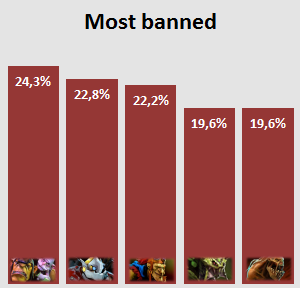 Conversely, DK's bans feature some of the heroes that straight up stop their lane dominance playstyle - Alchemist, Clockwerk and Batrider are heroes that allow the opposing team to pick off their cores.

The Lifestealer bans seem to highlight the overall strong position that Na'ix had back in 6.79, despite the nerfs to Rage and Open Wounds. Moreover, Na'ix's overall lesser reliance on items, coupled with Infest bombs would allow a team to force fights against DK's hit-and-run style of play. Additionally, by banning out the heroes that the meta proscribes, DK is able to capitalize on their flexibility and run similar heroes, or even just execute completely different strategies from game to game.

The latter is best exemplified when one watches DK play a single best-of-three: between matches, they can easily change their first picks and the entire team strategy, which is very atypical of any other professional Dota team. More importantly, this versatility is dependent on a successful draft, of which DK masterfully manage to draft according to the Radiant or Dire side advantages that they have. With this in mind, heroes that are good with almost every line-up are heroes that will be banned by DK to ensure that they have the upper hand, by forcing their opponents out of their comfort zones.

- BurNing is known for his signature Anti-Mage during the period of the Chinese 4-protect-1 meta game, but he actually plays a huge variety of carries. He has showcased this versatility in recent tournaments, such as 9 different carries in 9 matches at StarSeries Season 9. He also has the most number of followers on social media, with 320,488 followers on his Weibo account. The corresponding highest Twitter following in the West is Dendi, with 168k followers.

- Mushi is known in Mandarin as ??, which also means priest. He was well known in China before joining DK for his lane dominance, and was a bastion of SEA Dota hope - KuroKy once said that he felt like a noob when playing against Mushi.

- iceiceice has been gaming competitively for almost a decade. He had previously attained 3rd with Scythe at TI1, and also placed himself on the StarCraft II SEA GrandMaster Ladder, which accounts for his immaculate micro skills in Dota 2.

- LaNm has proven himself to be one of the most versatile players ever in Dota history - over the course of his stints in EHOME, RattleSnake and DK, he has played on all positions - from carry to mid to support. With his Chinese fans, he is more often called ???? which translates to national scholar without equal.

- MMY!! is actually one of the shyest members of DK despite also having a large number of fangirl supporters.  MMY is shorthand for Mao Mao Ya (???) which translates to Fluffy Duck. He is renowned for his farming mid plays on heroes like Lion and Tinker back in WC3 Dota , and is also known by his previous nicknames Dai and X!!! - Tinker's alternate name in WC3 Dota was X!!!.

Head over to our DK and The International wiki page for more information!