Invictus Gaming - On quest to reclaim the Aegis

“
It is not up to me whether I win or lose. Ultimately, this might not be my day. And it is that philosophy towards sports, something that I really truly live by. I am emotional. I want to win. I am hungry. I am a competitor. I have that fire. But deep down, I truly enjoy the art of competing; so much more than the result.”-Apolo Ohno

iG has had its ups and downs since its TI2 championship, but has always been regarded as one of the top teams in the world and one of the most feared opponents in matches.  For the upcoming TI4, with almost its entire crew from the TI2 days - the shy pianist 430, the outspoken ragemaster ChuaN, one the most brilliant captains Faith, one of the oldest and most well-known players since Dota 1 YYF and its new carry with a new passion Xi aka Luo - is iG ready to reclaim their title as the TI champions? 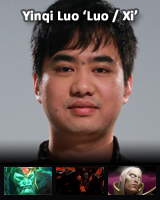 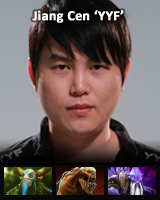 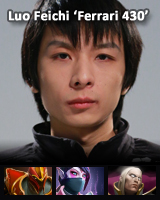 While it has been one of the top Chinese DOTA teams since DOTA 1, iG is most famous for its International Champion title of TI2.  iG’s performance at TI3 was lackluster, however, placing 5th and earning $114,975. As a result, the team underwent internal conflicts and multiple roster changes since. Right after TI3, iG's famous carry Zhou, and 4th position ChuaN both left the team. Hao and Banana (now part of Newbee) joined iG briefly, only to leave again after just a few months. iG's roster seemingly stabilized in February 2014, with ChuaN returning and Xi (aka Luo) joining the team.

Despite said changes, iG produced very convincing results, especially in 2014, and they were one of the only two Chinese teams that qualified for the Star Ladder Star Series Season 9 Lan finals in Kiev.

Upon returning from Starladder, rumors of iG roster changes resurfaced. ChuaN expressed frustration and dissatisfaction with his teammates on multiple occasions, and YYF stated that he felt exhausted and questioned himself and his team.  Despite this turmoil, iG stuck to its current roster and participated in a number of tournaments since. 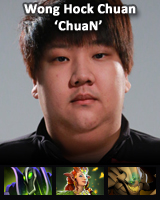 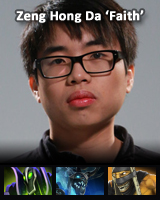 These tournaments showed sharp spikes in iG’s performance in May 2014, with extreme lows such as finishing second-to-last in the MarsTV Dota 2 League, and extreme highs such as winning the recent WPC tournament, knocking out Newbee and Team.DK.

Despite these ups and downs, the team visibly united and players began expressing confidence in each other.

“
Our team atmosphere is much better now. Losing a game is not the fault of one person. . . Hope you all believe in Luo and iG, we will become better and better”-YYF via personal Weibo

Even ChuaN, who was most outspoken about his criticism for his team post-Starladder, began displaying a positive outlook:

“
I suddenly realized that being happy is the most important thing. Cheer up no matter what!”-ChuaN via personal Weibo

iG’s roster and picks may have changed since its famous TI2 win, but its overall playstyle has remained largely the same – in early game, the team invests heavily in protecting 430’s mid hero with two roaming supports.  These participate in aggressive ganks and try to ensure that their mid solo goes into mid-game with a comfortable advantage.  430 will then use that advantage to carry the team mid-game into late-game with the same aggression that the supports display in the early stages.  iG are not afraid to take early teamfights, and to translate their teamfights into early pushes.  But while iG might pick a pushing hero as its carry every now and then, such as a PL or Lycan on Luo, or a full push line-up with a Nature's Prophet on the offlane, overall, the team thrives more on early aggression and a full-on PK lineup.

Notably, iG's three carries (YYF, Luo and 430) have been known to switch lanes, much like Team.DK.  For example, while Luo generally plays carry, he will switch to the offlane if iG picks YYF’s signature hero Naix as its main carry.  On other occasions, Luo might take his carry hero to the midlane while 430 goes safelane, with the two supports doing a dual lane mid or double-roaming. 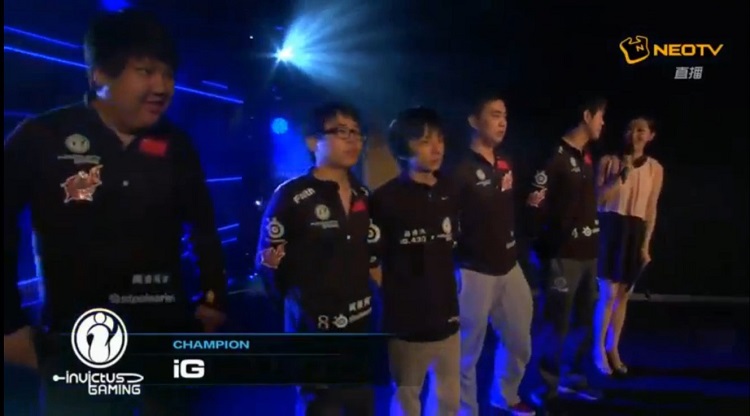 With TI4 approaching fast, it is still not clear whether iG fully stabilized.  With both outstanding (winning WPC) and questionable (finishing second-to-last in MarsTV DOTA 2 League) results in the same month of May, iG is looking more like a new team with unstable performance than a seasoned team that once won TI2.  But what is most uplifting about this team is the unity that its players currently present and their encouragement to each other as teammates.

This positive attitude and team atmosphere is precisely what allowed teams to beat out stronger opponents time and time again on TI4, so we remain hopeful that iG can find (and maintain) its undeniable strength again and show us its best performance at The International Dota 2 Championships 2014.

“
I hope I can win another world championship for myself, for 430, and for iG.”- YYF via personal Weibo 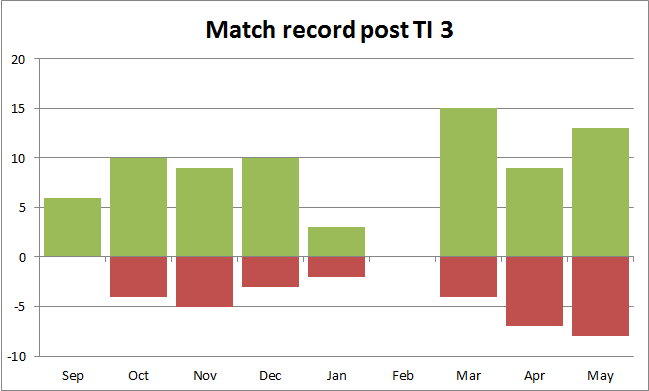 The graph above displays iG's unstable performance lasting well into May 2014.  While their results are more positive than negative most of the time, with TI4 approaching so fast and the green bars not rising nearly as fast as we would like to see, we wonder just how ready iG is, especially mentally, for the championship of the year. 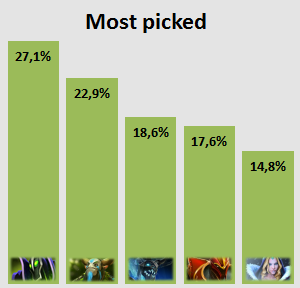 Rubick is easily iG's top pick, as ChuaN is one of the world's best Rubick players.  Not only is the hero versatile as a support in general, but it fits in very well with iG's style of early aggression and dual roaming supports.

Also notable is iG's second favourite pick - Nature's Prophet.  Once again, this hero makes for easy, early ganks with his level 1 or 2 teleport.

Moreover, three of iG's top picks, Nature's Prophet, Visage and Dragon Knight are great at early pushes, which iG loves to do, especially after successful teamfights.  Even when iG is at a disadvantage, they often turn the tide around simply by gathering as four or five and initiating early pushes, which will also force teamfights. 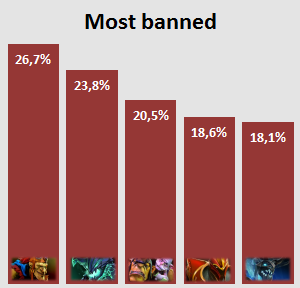 Suitably, Batrider is iG's most-feared hero.  Because iG's supports tend to roam early and leave their hard carry to his own devices, the offlane Batrider's early blink is inevitable.  A Batrider with early blink thrives in teamfights, no matter how aggressively and how early iG forces them.  As such, Batrider is truly one of the strongest iG-counterpicks.

As iG loves to center their lineup and overall strategy around mid-solo 430, it becomes easy to understand why OD is second on iG's most-banned list.  OD is one of the strongest mid heroes and can keep most other mid-solos, both ranged and melee, down in both level and farm.  Moreover, OD's Astral Imprisonment makes him difficult to gank, as he can break chain disables by imprisoning one of the enemies, or by imprisoning himself to give supports time to teleport in for the rescue.

We doubt that Alchemist will remain very high on iG's banlist post-nerf, but he was such a prevalent favorite in both picks and bans pre-nerf that his overall statistics stayed high until now.

-430's original ID was Ferrari.430, which is the model of a very fast vehicle.  This coincides with his real name Luo Feichi (the literal translation of"Feichi" is speeding fast, as if flying)

-Before joining iG, carry player Xi aka Luo was part of Speed Gaming.  Speed Gaming was considered a second-tiered team and many, including iG teammates, questioned Luo's ability to play on a top-tiered team.  But Luo has proven himself since.

-ChuaN plays 4th position for iG, but in his Dota 1 days, he was one of the most feared mid-solos on the SEA scene and was known for his beastly Shadowfiend.

-YYF mostly plays offlane for iG, but in his Dota 1 days, he was also one of the most famous mid-solos in China.  In a match-up between the then-famous top-tier Chinese teams LGD vs. EHome, YYF's Storm bought back 6 consequtive times to defend the ancients. Many believe he was the reason Icefrog added a buy-back timer in the patch that came out after that match.

-Faith is one of the most respected DOTA 2 captain in China and the heart and soul of iG.  In an interview discussing his option to leave iG, ChuaN commented that he stayed because he did not want to leave Faith.

Head over to our iG and The International wiki page for more information!