Thoughts on the upcoming International: How does it affect the competitive scene?

A glance at the calendar shows that Western organizers are in fierce competition for the community’s attention this summer, and while similar Eastern events have not yet been announced, at least China should have some plans in their pocket. Besides Dreamhack, Star Ladder, and of course TI 4, Turtle Entertainment went especially all-out with a 45,000 seats location for their ESL event targeting the 28th and 29th June.

While all of the above ought to be great news for Dota 2 eSports fans, the proliferation of major tournaments - especially in the months before TI 4 - has, in certain quarters, resulted in complaints of over-saturation. MLG, for example, was rumoured to have replaced Dota 2 for their Anaheim event with League of Legends due to the pressure of being surrounded by Dreamhack Summer and the ESL One finals. Tournament organizers cut their teeth on delivering the most competitive line-ups of attendees. Not being able to announce the hard hitters and attention magnets equals lack of commercial success, because there is a direct relation between the success of an event and the list of partaking competitors.

A few years back, we celebrated DreamHack for flying over a few teams from North America, but today the chase for superlatives is on, and organizers have to go further and promote their event as a clash of the world’s best teams, independently from which continent they come from. But is such attention healthy for the teams themselves? With so many events in such a short time this June, I honestly struggle to see any team surviving the month without craving for weeks of recovery right after. Yet, it is precisely the weeks after June that they don’t have – for those are the weeks leading up to The International 4. 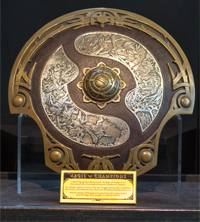 We are allowed to forecast: DreamHack has ~$200k prize pool. Just for fun, I escalate success for ESL One and say they raise ~$300,000 for their total prize pool, befitting a 45,000 capacity venue. Adding these two events makes half a million, which is a huge sum for any eSport, yet still two million dollars less than what TI 3 was. With the growth of Dota 2, we ought to see an even higher prize pool for TI 4.

Na’Vi and Alliance said on multiple official and unofficial occasions that winning a TI is what matters all year. Not only because the cheques received from Valve are the tickets for at least another year of being an eSports professional, but also because they not only play for dollars but also to please their competitive minds. In the words of the rising Chinese talent ‘Maybe’: “I came to Dota 2 to become a World Champion”.The only legitimate World Championship in Dota 2 is The International, and no matter how much money someone else might throw at a tournament, the glory of winning a TI overshadows everything else.

Now put into perspective the idea of a TI that happens shortly after the biggest third party tournaments in June: Does Valve want to broadcast a star player telling the interviewer that they dropped out early versus an underdog because they were not 140% on top of their game due to fatigue? Will all those elite teams risk being exhausted from travelling when there are millions on the line? I doubt that. And in the same vein, how can we as a community demand events chase superlatives like 6-digit prize pools and football stadium venues when there is a major risk that contestants pull out because they fear for their condition in another - more important - tournament?

If Valve is really set on a schedule for TI 4 that puts them this close to other major events, they are putting the ecosystem that builds the commercial success of their most important game at risk. Maybe it’s due to limited knowledge and experience in eSports, but everyone stands to suffer when the official creator of Dota 2 disregards their biggest third party supporters during tournament planning. It is, after all, these organizers who produced the $500 weekend cups and $150,000 football stadium matches that built the community craving for a TI every year.

MLG, DH, and ESL have their own commercial interests. If they invest and put their money on the line only to be schedule screwed by the multi-billion dollar company who develops and publishes the game they are investing in, the result is that space is created for Valve’s competition to attract those same organizers. In the case of Dota, we all know who stands to benefit the greatest from a fall out between Valve and its third party partners.

Yes, all of these statements are, to a large degree, exaggerated and hypothetical, but if you book a stadium and put so much effort into an event, only to end up with tier two teams and a disappointed audience, would you be eager to pursue the same path a second time? The best news is that Valve has all the tools at hand to prevent such a scenario:

They can push back TI 4, maybe to September. There is no requirement that TI 4 happens in August, much less July, and as long as we get the best teams, in their best shape, delivered in an epic-quality production tournament located in a large venue, who’s going to complain?

They can also warn organizers in advance. As developer and publisher, Valve can prevent tickets from being approved in the workshop if the event targets a four weeks window before TI, which will result in the majority of organizers not being interested in those weeks as their commercial success is directly connected to revenue from tickets. Maybe not all organizers will be dissuaded, but the purpose is to give a clear warning that those weeks present a high risk of schedule conflict for teams.

Another way to effectively prevent such issues in the future is to do what DreamHack does: announce your schedule way ahead of time. Valve might not want to call the exact dates since they, according to my sources, haven’t yet started planning TI4, but if there is an official statement on the targeted month, everyone would know ahead of time what window to avoid when dealing with world class teams. Indeed, as a big company with tremendous resources, it is in Valve’s interest to lead the pack when it comes to preparation and scheduling, and to work with organizers in ensuring a conflict free competitive year.

In short: too many events in too short a time hurt the competitive scene, and the result is that everyone loses. One solution to this problem, with respect to TIs, is for Valve to block a particular time window from getting filled with other tournaments, and to release their plans early. For TI 4 specifically, pushing back the tournament to not cause collateral damage with other events is recommended.

Note: This article is based on the personal thoughts of the writer and does not reflect the full view of GosuGamers.