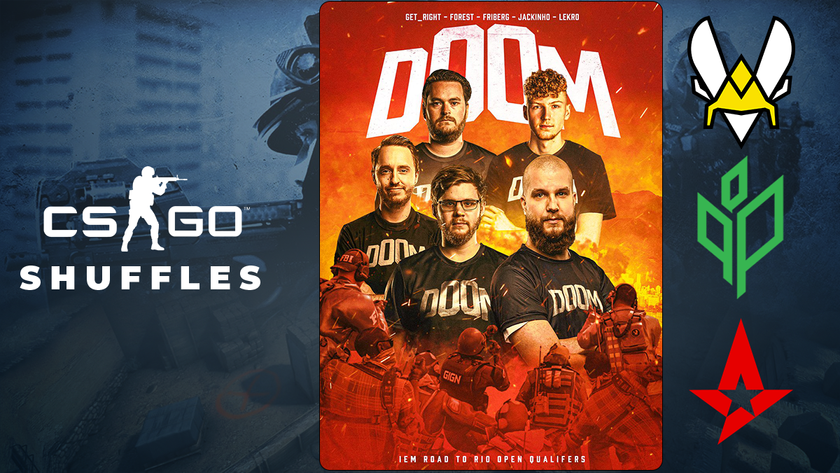 With the RMR tournaments just around the corner, teams are now finalizing their rosters to prepare themselves to compete for a place at the upcoming IEM Rio Major. Big announcements are in the pipeline by teams on the scene.

He will be playing under the team name “doom” with Jonas “⁠Lekr0⁠” Olofsson and Jack “⁠Jackinho⁠” Ström Mattsso. He previously played with Ninjas in Pyjamas among others. This announcement came as a surprise as he has been doing streaming prior to this.

Lotan “Spinx” Giladi has confirmed that he will be joining Team Vitality after weeks of rumours and speculations. He was formerly with ENCE prior to the new joining. His signing is to replace Kévin "misutaaa" Rabier, who was benched earlier and is now with Team Falcons.

His joining with Team Vitality is hoped to help the struggling team make a splash in the international scene to improve their standings. Spinx started his career with NOM-Gaming. His joining meant that Team Vitality is now no longer a majority French roster. The team will be playing in the upcoming BLAST Premier Fall Groups with the new roster.

The team announced that former Heroic rifler Ismail “⁠refrezh⁠” Ali and former Copenhagen Flames rifler Rasmus “⁠Zyphon⁠” Nordfoss will be joining the German outfit as replacements for both Timo “⁠Spiidi⁠” Richter and Rasmus “⁠raalz⁠” Steensborg who left the team recently.

refrezh will be the new team IGL alongside his focus as a rifler for the team.

“Just in time for the start of the RMR Qualifiers, we can announce the latest additions to our CS:GO line-up. In many ways, this is a turning point for us. Welcome home not one, but two greatly talented and skilled players [refrezh and Zyphon]. With our age average down to only 20 and the experience that the duo already brings with them despite their young age, be it the major participation or the victory of the ProLeague, we are very confident about what the future holds.” – Team Sprout

The addition of the two players will bring a wealth of experience to Sprout with both having played in the high-tier CS:GO tournament circuits. The roster will be participating in the upcoming European Regional Major Ranking (RMR) open qualifiers for the IEM Rio Major.

The youth division of Astralis, Astralis Talent has welcomed Kristoffer “⁠Kristou⁠” Aamand and Nicklas “⁠jarko⁠” Rasmussen to their roster. Both will be replacing Frederik “⁠Fessor⁠” Sørensen and Benjamin “⁠brzer⁠” Jensen.

The announcement came after Astralis Talent finished fourth place in the recently concluded WePlay Academy League Season 5, where they lost to Team Spirit Academy in the semi-finals. Kristou previously was with North in 2020, while jarko is a newcomer to the upper-tier CS:GO tournament circuit.

“We are signing two new players from the top of the Danish talent scene who both have plenty of official match experience. Nicklas … has proven his high skill level by winning the Danish POWER Ligaen championship. Kristoffer … has played several matches for both AGF and North against some of the best teams in the world. The goal for Astralis Talent is to develop players as individuals and team players. In brief, our Academy is about developing talent, and I can't wait to see our two new players do just that.” - Kasper Hvidt, Director of Sports, Astralis.

The new roster will likely be playing in online cups along with some tier-two and tier-three tournaments as they wait for the next edition of the WePlay Academy League.

What do you feel on the news that legend GeT_RiGhT going back to competitive CS:GO?

Amazing and suprising
Thank you for voting!
Meh
Thank you for voting!
Sharil “memeranglaut” Abdul Rahman
He dabbles in Esports, checking out what's new and hip with the industry. Outside of Esports and gaming, he likes Japan. Ijou. Check him out at @SharilGosu
Share Tweet
9 people reacted to this post