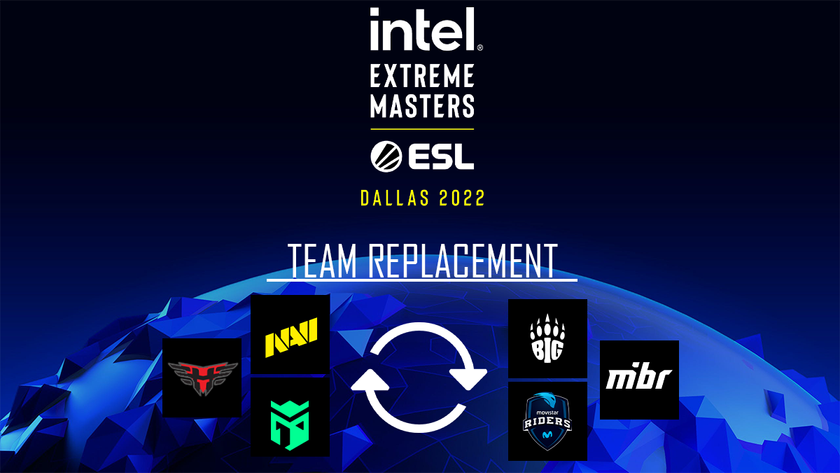 Travel logistics complications are stopping these top teams to participate in the North American IEM.

Intel Extreme Masters has announced that three teams will be replaced in the upcoming IEM Dallas tournament. The three teams are facing COVID-related travel logistic problems, preventing them from travelling to the United States.

The three teams are:

The three teams were scheduled to play at the tournament, with their matches set for 31st of May. Their slots in the tournament have been replaced by:

BIG and Movistar Riders got their tickets as replacement teams because Copenhagen Flames, the next team in the ESL World Ranking, can’t accept their invitation due to travel challenges. MIBR’s replacement for Heroic is also along the same line, as the next team to go was supposed to be Team Spirit, which doesn’t have the required visas to travel to the US at the time being.

The first match for IEM Dallas will be between G2 Esports and Movistar Riders. IEM Dallas offers a $250,00 prize pool for the winners, from first place to the sixteenth. Winners will also walk away with ESL Pro Tour points, and BLAST Premier points

What do you think of this news?

Kind of sad
Thank you for voting!
Nothing much
Thank you for voting!
Sharil “memeranglaut” Abdul Rahman
He dabbles in Esports, checking out what's new and hip with the industry. Outside of Esports and gaming, he likes Japan. Ijou. Check him out at @SharilGosu
Share Tweet
11 people reacted to this post