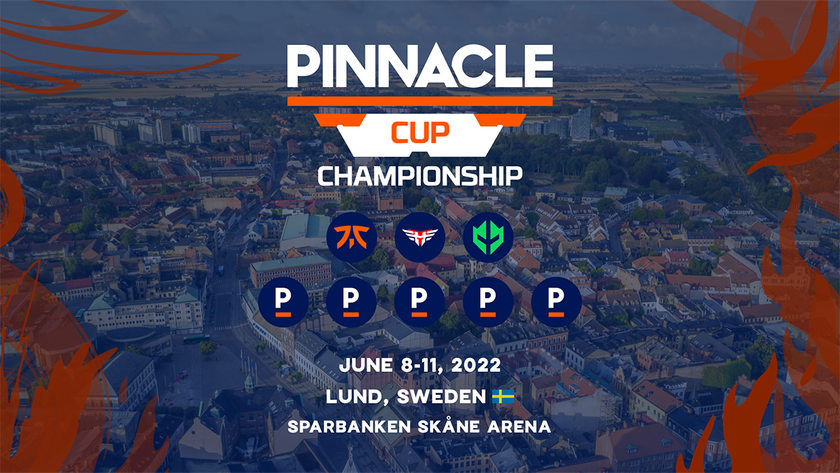 The tournament, organised by Pinnacle and GRID Esports in partnership with the City of Lund, will be held at the Sparbanken Skåne Arena from 8-11 June 2022.

Pinnacle, GRID Esports, the City of Lund and Black Molly Entertainment will be working in partnership in organising the Pinnacle Cup Championship – a culmination of Pinnacle’s long-running flagship CS:GO tournament series. The tournament will take place in Sparbanken Skåne Arena, where up to 7,500 visitors will be watching their favourite teams play in a LAN setting, live on stage.

Eight teams will be playing in the Pinnacle Cup Championship, battling it out for a share of the $250,000 prize pool. Three teams have been confirmed for their participation. They are:

Additional invites will be revealed in the upcoming weeks.

GRID Esports and Pinnacle partnered in 2019 and since then have delivered two iterations of Pinnacle’s successful CS:GO tournament series. The upcoming finals will be the largest event in the partnership’s history and the conclusion to all the competitions hosted in the last 2 years. An additional two online Pinnacle Cups will be played before the Cup Championship in Lund, Sweden.

“Pinnacle Cup Championship is a testimony of the shared, long-term vision we have been committed to together with Pinnacle from the beginning of our cooperation - to provide a unique, entertaining offering to esports fans and capitalise onGRID unique data offering, and Pinnacle's pioneering experience in esports betting. Now Pinnacle Cup has evolved into a firmly established esports tournament attracting multiple world's foremost teams. We aim to reinforce this position with the upcoming LAN event in Lund.” - Tom Warburton, COO of GRID Esports.

The event is planned in cooperation with the City of Lund to provide a world-class viewing experience outside the capital cities. GRID and Pinnacle have selected Black Molly Entertainment, a Swedish-based creative collective, to lead the organisation of the tournament.

"We are delighted to announce the Cup Championship in Lund. ‘Pinnacle Esports’ has become a standalone brand specifically for the esports community which we continuously want to listen to and show our appetite for growth within the community. New esports titles have been added to our offering, we have raised our wagering limits, offering unrivalled odds on esports markets, launched a bespoke esports hub integrated with live streaming, and of course our landmark Pinnacle Cup series! A LAN event to reward the teams that have won these Cups and give the community a chance to watch the best teams in CS:GO, live in action, is the icing on the cake from a hugely exciting 12 months." - Paris Smith, Pinnacle CEO.

GRID partners with the rights holders in esports & gaming to leverage the potential of their data IP. This enables sustainable growth of the entire competitive gaming ecosystem and empowers the esports community. The central technology piece of the company - The GRID Data Platform - unlocks additional revenue streams for its partners and capitalises on the potential of data in digital sports for storytelling, fan engagement, and integrity.

Visit Lund AB is the department within Lund’s municipality with the task of marketing the city as a visitor destination, offering hospitality and tourism services as well as recruiting, developing and implementing public events.

Black Molly Entertainment is a creative esports collective, founded in Sweden in 2013. With esports production as our core business, we have today grown into a full-scale creative production agency. We offer services to anyone in the ecosystem of esports and gaming, including brands, teams, events, game publishers, and media. The company consists of 12 full-time employees and a wide network of freelancers, with an office and studio located in Stockholm. BME is also a partner to the gaming and esports communication agency – Frame.

Will you be watching the Pinnacle Championship ?