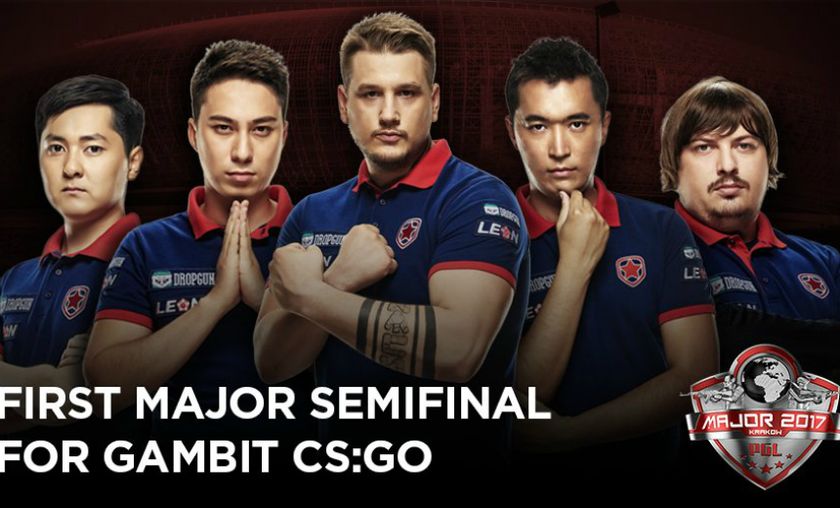 Gambit Esports break their quarterfinals loss curse and secure a spot in the semifinals of PGL Major Krakow 2017 by beating Fnatic in a convincing fashion.

The first map of the Fnatic vs. Gambit quarterfinals series kicked off with the CIS team on the Terrorist side. Around the 1:20 mark, Gambit attacked the B site and, as Fnatic were pushed to the back of the site, Gambit had no trouble in taking it over with all five players alive. The Swedes tried to retake but, sadly, were all taken down by a single man, Rustem "mou" Telepov and his pistol. It was one heck of a way to start the quarterfinals series. Gambit also had no trouble picking up the two anti-eco rounds and secured themselves the 0:3 start. In the first gun round, Gambit played the slow-game and unfortunately, it didn't pay off. With only 20 seconds left in the round, Jesper "JW" Wecksell found the first pick onto the attacking T side players. Their push was stopped by the Swedes and Fnatic took one on the board. In the following round, Fnatic, especially Jesper "JW" Wecksell, continued last round's success and Gambit had run out of money. In the eco round, Dauren "AdreN" Kystaubayev picked off two Fnatic heads with the Desert Eagle, giving a huge player advantage to Gambit. However, Fnatic had the weapon advantage and the rifles of Fnatic easily sprayed down Gambit. Though Gambit almost stole away the eco-round, they lost the buy round they were saving for in a disappointing fashion. Cornered into another save, Gambit again showed life with multiple pistol frags. However, their advantage was cancelled out by Fnatic's weaponry advantage once again. Fnatic took six consecutive rounds on the board. At 6:3, Gambit partially force bought with TEC-9s and rushed the A site. The trades went in favour of the CIS squad, but thankfully this time, Gambit successfully capitalized off the advantage with stolen weapons. However, Gambit's ultimate weapon was none other than Abay "HObbitt" Khasenov, who took down three of Fnatic players. Afterwards, Gambit recovered from their six consecutive loss and ended the half with only a single round deficit.

Fnatic exploded onto A in the second pistol round. Though they managed to get the bomb down, Gambit were extraordinary in the retake, ending the round with four alive and well. At 8:9, Fnatic had enough economy to buy-in with five AK-47s. Again, they planted the bomb but were horrendous in the post-plant, giving up another round to their CIS rivals. Interestingly, Fnatic stole away a round from Gambit when they forced bought with upgraded pistols in the nineteenth round. The next round was a disaster for Fnatic. After running the clock down too much, Fnatic had only a few second to plant the bomb. Though Fnatic had the player advantage, Mihail "Dosia" Stolyarov flanked two of the Swedish players who were clumsily trying to plant the bomb with little time left. After the flank, there was absolutely zero chance for Fnatic to plant again and Fnatic's economy was reset. From then on, Gambit proceeded to get fourteen rounds on the board. However, with their backs against the wall, Fnatic took over the site with two AK47s and three TEC-9s. Ultimately, Jesper "JW" Wecksell was left in a post-plant 1v2. The Wonderchild played the post-plant to perfection, baiting out the players little by little without giving himself away too much. Energizing off Jesper "JW" Wecksell's hero play, Fnatic brought themselves to fourteen rounds. But at this point, Gambit had already reached fifteen. In the 30th round of the map, Rustem "mou" Telepov found the early pick. After Fnatic attempted to push into the B site from Upper, they got demolished by a Gambit player who was right under stairs. All of a sudden, it was Jesper "JW" Wecksell against three full-health Gambit players. The task was one too tall for the Wonderchild and Gambit ended the first map with a 16:14 score.

Gambit, this time starting on the CT side, again took the first pistol round. Taking the subsequent anti-eco rounds without even granting Fnatic the bomb plant, Gambit were off to a good start. At 0:3, Fnatic had a four AK-47 and a single UMP buy. Though Dauren "AdreN" Kystaubayev took the first kill, Fnatic were able to return from the disadvantage, demolishing all players of Gambit with four alive. However, the success couldn't be followed up, as Rustem "mou" Telepov stepped up for his team once again, defending the A site by spraying down two. In the next round, Fnatic were able to have a decent buy. However, Abay "HObbitt" Khasenov aggressively pushed Banana and killed two, putting Fnatic in such an unfavourable situation. When the Fnatic guys finally attacked the A site, Abay "HObbitt" Khasenov killed one before going down. But even with the huge advantage the young player gifted to Gambit, Fnatic came on top and found their second. But Swedes were not ready for the X GOD, Mihail "Dosia" Stolyarov and his sensual yet explosive mastery of his favourite gun, the UMP45. By getting two back to back rounds, Gambit broke the economy of Fnatic and eventually got a five round lead, 7:2. Just as it looked like Gambit were going to smooth sail to a dominant first half, Fnatic struck back. The rounds were close but ultimately, The Swedes managed to win the half with 7:8, thanks to their group effort.

The second half pistol round came down to a low HP Mihail "Dosia" Stolyarov against two Fnatic players. After pushing the two Swedes to CT spawn, Mihail "Dosia" Stolyarov planted the bomb. The low HP Fnatic player made the horrible mistake of being the first player to peek the Russian player, who he easily fragged. As the bomb timer was quickly ticking away, the remaining Fnatic player, Freddy "KRiMZ" Johansson had no choice but to tap the bomb and stick to the defuse. The X GOD denied the ninja attempt and Gambit took their fourth pistol round in the series. Gambit also secured the following save rounds and there came the first gun round of the second half. The CIS squad opted to attack the B site and Fnatic let them have it. In the retake, it was four Fnatic players against Mihail "Dosia" Stolyarov and Daniil "Zeus" Teslenko. Fnatic dropped a smoke on the bomb and had players meat-shield the defuser. The attempt was successful and the Swedes were only a round away from tying up the game. At 9:10, Jesper "JW" Wecksell got the first kill in Banana. Gambit attacked the B site and got the bomb down once again. But this time, Fnatic's retake was not successful, even though they had a massive player advantage. Fnatic's economy was broken. Gambit secured the anti-eco with ease, though Dennis "dennis" Edman found two frags with the USPS. At 10:12, a chaotic round ensued. In the end, it became a 1v1 between the two in-game leaders: Robin "flusha" Ronnquist vs. Daniil "Zeus" Teslenko. Daniil "Zeus" Teslenko managed to leg Robin "flusha" Ronnquist with the AWP, but because Robin "flusha" Ronnquist had higher HP, the Swede was the one to victory in the head to head clutch. Sadly for the Swedish fans, Fnatic was reset immediately when Abay "HObbitt" Khasenov clutched a post-plant 1v2. With absolutely no money to buy guns but also no room to give away rounds to an eco, Fnatic forced in with upgraded pistols. Somehow, Fnatic upset Gambit in the force-buy but were reset in the subsequent round. Fnatic's second attempt at a force-buy was unsuccessful and Gambit reached map point and quarterfinals series point. Former world champions, Fnatic were, once again, left with nothing but money for upgraded pistols. But luck had run out for the Swedes and Gambit 2-0'd in the quarterfinals, waiting to face the winner of SK Gaming vs. Astralis.

Should Gambit participate in the rumored CIS shuffle with Na`Vi?