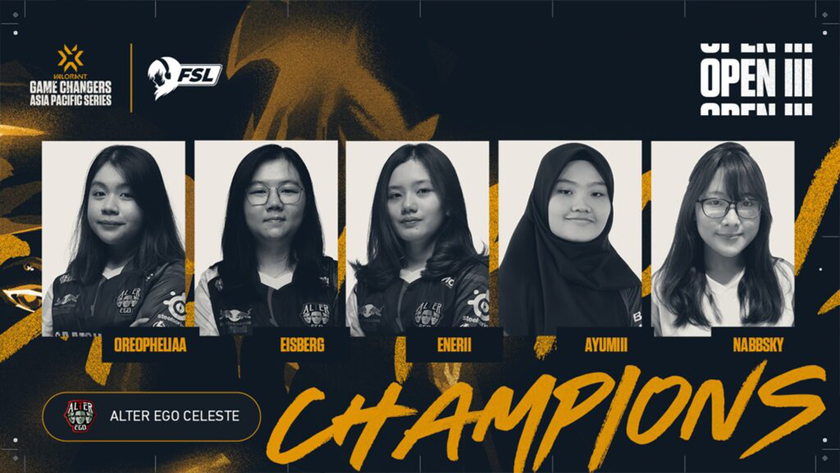 As one of the satellite tournaments for Valorant Champions Tour 2022, Game Changers is designed to increase the participation of women in VALORANT. The APAC Game Changers saw sixteen teams from the region battling to see who the winner of the tournament would be. At the end of the tourney, Alter Ego Celeste emerged as the overall winner, as they beat Team SMG in the grand finale.

The team is on a winning streak, winning the last three APAC Opens for 2022. For APAC Open 4, the Indonesians started strong from the start, as they beat Aresta, Bren Esports Victress and Nigma Galaxy Female before meeting up with Team SMG in the Grand Final.

AEC saw a second wind on the fourth map, Fracture. The team led on both halves and eventually gave them the needed win. On the deciding fifth map, Haven, SMG dominated the first half, but AEC quickly caught up in the second half with back-to-back rounds, and ultimately the win for the map.

They walked away with $1,500, and 20 circuit points to be counted towards the Elite final stage at the end of the year in October.

What do you think of Alter Ego Celeste's performance?

Top notch
Thank you for voting!
Just okay
Thank you for voting!
Sharil “memeranglaut” Abdul Rahman
He dabbles in Esports, checking out what's new and hip with the industry. Outside of Esports and gaming, he likes Japan. Ijou. Check him out at @SharilGosu
Share Tweet
1 people reacted to this post

VCT 2022: Top APAC teams have secured their placement at the upcoming Stage 2 Challengers