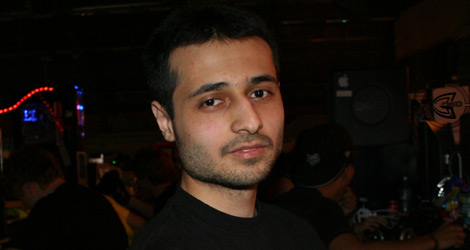 HayprO played the former World of WarCraft pro Orly for a place in the semi finals of GosuCup Invitational. The zerg versus zerg matches were full of action and the third game had to decide the winner. HayprO shared his thoughts with GosuGamers after his victory.

HayprO won his two final games against Orly after losing the first match on Scrap Station. Despite the nice usage of banelings in the third match, Orly still had to throw in the towel and wish HayprO the best of luck in the next round.

- "I wasn't surprised to win, I knew I could but that it wouldn't be easy."

HayprO won ZOTAC cup a while ago, and just recently took home the first place from CraftCup where he defeated MorroW in the finals.

You have been winning A LOT lately. How do you feel regarding your conversion from BW to SC2?
- "Making the switch from Brood War to StarCraft 2 has been pretty smooth, which has enabled me to be on the top from the start.

- "The biggest difference from Brood War to StarCraft 2 is that zerg doesn't have any casters that are worth getting. In BW the defiler played such a big role in every ZvT and ZvP that went beyond the early-mid game phase. In SC2 we have the infestor, but since the nerf it's just not worth getting, I would rather use the gas to get hive and broodlords."

What do you think of the latest patch nerfs for Zerg? Do you think with the Roach nerf we'll have another Rock/Paper/Scissor matchup in ZvZ like in SC1?
- "The last patch did nerf zerg quite a bit but I haven't really noticed the changes in-game, the battles still goes the same way, immortals destroy roaches, marauders with medivacs still destroy hydras. However, the -10 hp for hydras makes storm even better now, also the thor rush has been pretty common lately, which is no surprise because of the -15 seconds build time.
When it comes to ZvZ, roaches still counter zerglings pretty easily when you have a lot of them."

For the next round you will be up against either ZpuX or Nazgul. Who would you rather face and why?
- "It's really hard to pick, both ZpuX and Nazgul are top players, but if I had to choose one, I think I would pick Nazgul because I don't like zerg vs zerg.

ZpuX said in an earlier interview that he had it rough against "strategic players" who had prepared strategies instead of going into a match kind of "vanilla". What kind of player would you say you are? Do you analyze a lot prior to your matches?
- "I wish I was a strategic player, but no I'm not. I usually just think a bit before the matches about my overall game plan and after that I just adapt to what I play against."

We saw two Swedes join up with Unique E-Sports recently. How are you set when it comes to teams in SC2? Are you still playing for Templars of Twilight?
- "We in ToT haven't made a decision about SC2 yet so right now it's not a SC2 team. Since the game is in beta I haven't been looking for a team, but I wouldn't mind joining a team if a good one comes up."

Any last words?
- "I wanna give a big welcome to ret and Naugrim who a couple of weeks ago decided to retire from gaming, but now are back and ready for action."


HayprO moves on to meet the winner of Nazgul and ZpuX who will play their games on Wednesday along with the ones between DeMusliM and Raven. Both matches will be streamed.