Artosis about the lack of top tier Terrans

GosuGamers asks Dan "Artosis" Stemkoski about the current lack of Terrans in the scene and what the reasons behind it are.

In the recent GosuGamers Top 30 (April) we only see 5 of 30 players using the Terran race, two of those from China. Why do you think Terrans are under-represented?

- Most of the top level foriegner Terrans don't really play anymore. Most of the best Terrans were Russian and American, and these players simply do not play in many events these days. Almost all of them are very old school and don't have the same drive they once did.


“
The level at which high-level foreigners play is imbalanced for Terran” - Artosis
So do you think other players not as good as, say the 30 best, have any foreign role models to look up to and therefore choose another race? Could it have to do with the playstyle of the foreign Protoss and Zerg players that makes it tough for Terrans in the foreign scene who lacks sufficient macro/micro to be up to par with say the Koreans or the Chinese?

- There are lots of reasons why there is a huge lack of Terran players in the foriegner scene. The level at which high-level foriegners play is imbalanced for Terran. At this level, if 2 players put in the same time and effort, the Terran player will be behind. No foriegners are really good at the mechanics of the game, which is something you must accel in to use Terran at a very high level. Likewise, foriegners just do not understand Terran at all. In Korea, it is easy to learn Terran. It is a race with which you can simply copy better players and practice your mechanical play and accel with. In the foriegner scene though, this is just not the case.

“
It really makes more sense to choose protoss or zerg if you want to be a top player more quickly” - Artosis
- Terran is also very susceptible to cheese. The foriegner scene is very, very cheese heavy. Countless "top" foreigners just do very simple and cheesy builds which can be very hard for a mid-level Terran to stop.

- When you look at all of these negatives to using Terran in the foreigner scene, it really makes more sense to choose protoss or zerg if you want to be a top player more quickly.

So if we would like to see a more racial balanced foreign scene, what do you think should be done? Send more foreigners over to Korea so they can learn the mechanics like NonY and IdrA, or should we perhaps lift forward some Terran-friendly maps?

- I don't think that we will ever see a large re-emergence of Terran into the top foreigner scene. Already as is, there is very slow turn-over at the top. Most of these top players have been at or near the top for many, many years. These players know how to stay at the top, and won't be pushed around by newer players too easily. In addition, there are very few up-and-coming Terran players out there at the moment. Off of the top of my head I can only think of a few who are poised to make any impact on the top foreigner scene, (MorroW, HoRRoR and AeriALs), but even these 3 have a long way to go before they are solid threats.

- Going to Korea helps players, but they leave the scene largely behind, as we have seen from IdrA. Changing maps for balance within the foreigner scene is overall a bad idea for the health of the scene. We should follow the Korean map pools as the majority of our practice comes from playing the Courage players. 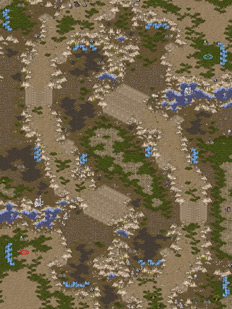 Which of the current maps do you feel can work for the Terran players' advantage?

- The best map for Terran right now is probably Sin Chupung Ryeong (picture). It's really easy to cut this map in half, and if you learn the correct strategies and counter strategies on it, then it should be the go-to map for all foreigner Terran players out of the current popular maps.

Looking at the American scene, which Terrans aside from IdrA do you see as the most prominent players?

- I think since I have recently become active again, I would have to be listed up towards the top of American Terrans. Also, Nyoken as always. It seems like almost everyone is inactive right now in the WCG's off season. Probably we will see Yosh return, and perhaps FroZ and Nesh. Other than that I'm unsure. Some players look like they are trying to become good, such as Gretorp, LastShadow, and KawaiiRice. Will any of these players actually become threats in the USA? I don't think so, but its in their hands.