Fenix: 'Mondragon only has one play style' 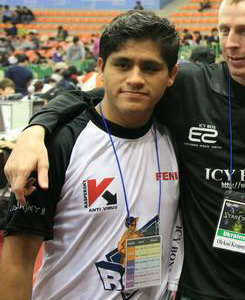 "I was surprised how badly BRAT_OK played, I never expected such TvsZ play from him. I know Pavel, and he has beaten better Zerg players than Mondragon," says Fenix to GosuGamers.

"BRAT played like a D player"
"BRAT just stayed in his main all the time, being controlled by mutalisks. When he had enough marines, tanks and vessels he pushed out, but by then Mondragon already had the entire map with defilers and guardians," says Fenix and compares BRAT_OK's play to a D player on iCCup.

Mousesports Peruvian Terran player Fenix proved in the round of 16 match against Kolll that his Terran versus Zerg matchup is to look out for.

Should he advance to the semi finals, he would rather play ret than SEn. "I feel more confident against ret, as he is a normal player. His style is not amazing, like some progamer, so if I play my best I can beat him," assures Fenix.

"If everything goes well, I will play IdrA in the grand final. I feel I am in very good shape against Terran at the moment, so you might see some surprises," says Fenix.