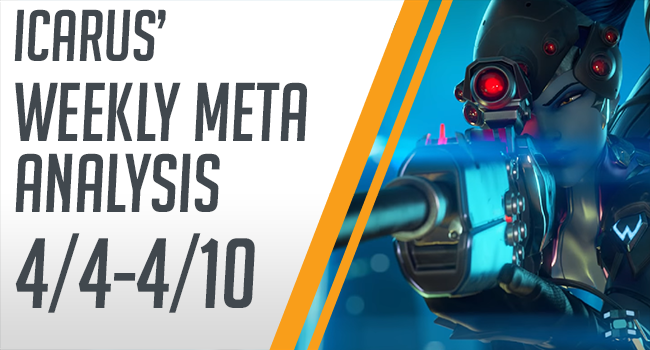 Just like any competitive game, the meta for Overwatch is constantly evolving. The ability to hero switch on the fly and a myriad of different maps makes the meta incredibly diverse, so much so that shifts can occur during a single map. With so much happening at once, it can be hard to keep track of, but in this series, I aim to show what the meta as a whole looks like. Every week I manually record the hero picks from that weekend’s tournaments and compile them into a by-the-numbers look at the current state of the game, including a tier list, summary of the week’s strategies, a look at each hero’s place in the meta, and more!

Highlights of this week’s meta

In last week’s article, I put up a poll asking if you thought the Symmetra nerf would be big enough to change the popularity of Comp 2.0, and many of you seemed to think it would. Once again you were correct, as Symmetra along with fellow members of the strategy, Soldier: 76 and Tracer, saw a significant drop-off in pickrate. The nerf had it’s effect, as the now 25 health gained from Symmetra’s shields stopped being effective enough for the strategy to be truly dominant. 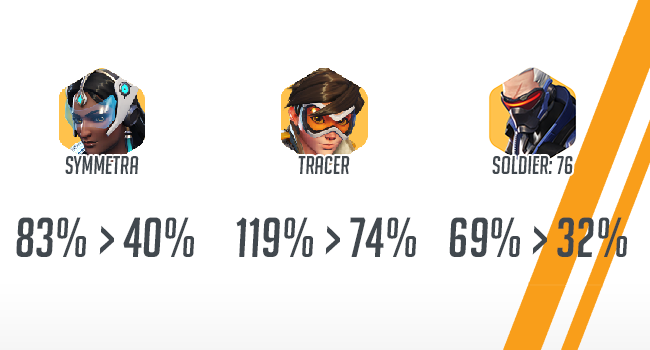 Many heroes saw a large increase in play due to the nerfs to this strategy, as without a dominant, rigid composition in place the door was open for other characters to take the spotlight. Mercy in particular saw a large boost from this. Without Symmetra taking up the position she would normally fill, she saw play as a primary support pick, achieving a pickrate increase of 33%.

Even with a dominant strategy gone and so many heroes seeing rises in pickrate, the Rarely Used tier remained nearly unchanged since last week, showing that it’s not that teams don’t know how to use the heroes, but instead that the heroes simply aren’t strong. These heroes will likely need a few balance changes before they see some real play. 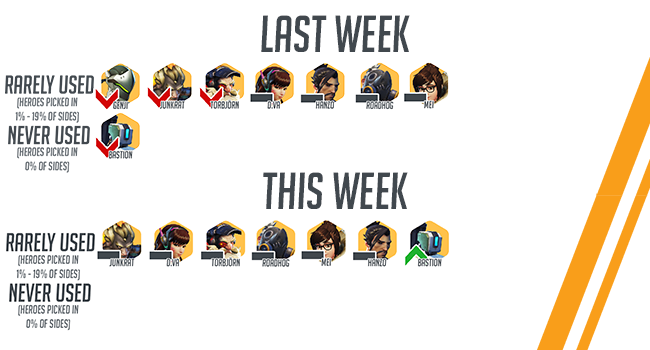 In a post-nerf meta, teams are always trying out new strategies and experimenting with heroes in different ways. Because of this there were many shifts and new compositions this week, and I barely scratched the surface of them all. To see the complete summary, including the full tier list and in-depth analysis of each hero’s place in the meta, watch the full video:

Will the unpopular heroes find light soon or do they need buffs?