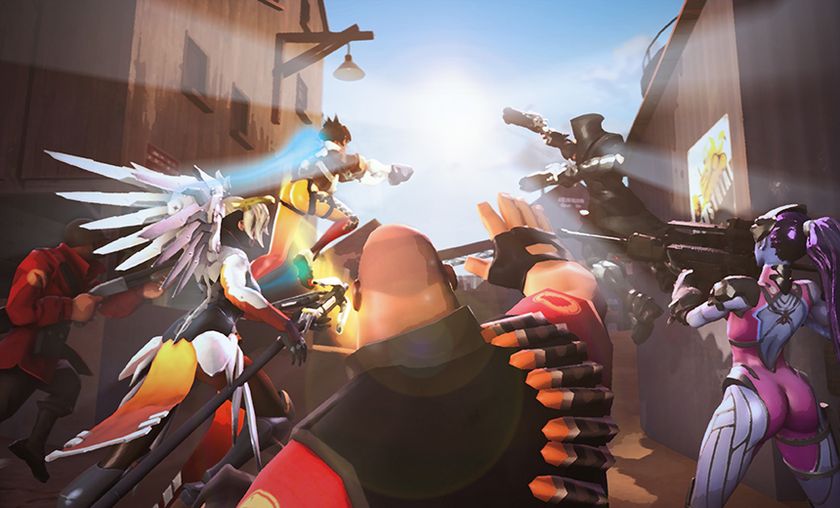 When Overwatch was first announced, a lot of parallels were drawn to TF2 due to its game-design origins as a class-based shooter. While for the most part the similarities are fleeting, Overwatch’s huge PR campaign and raw, exciting appeal has pulled in a large amount of the top TF2 scene. These players moved to Overwatch searching for the recognition and money that the underdeveloped TF2 scene had never been able to provide them with, whilst also offering an opportunity for them to carry over key skills in the transition and instantly fit into the top.

As an example to see how intertwined the players have been from the top of the two scenes, we can take a look at the recent European LAN, TaKeOver. Seven out of the eight invited teams contained players who used to play TF2 at the highest level, from the Finns in SG-1 who were dominant during 2009/2010, all the way through some of the greatest players of all time in Creation eSport’s KnOxXx and numlocked, to recent champions such as Zebbosai. The only team at the event with no representation from former TF2 players was Northern Gaming Blue, and former TF2 veterans made up over 30% of the Overwatch LAN competitors.

Players at the first offline event for Overwatch, TaKeOver. Image credit to TaKeOver.

TviQ from Rogue was one of the best hitscan players during his time playing Scout/Sniper for Infused during 2013, and also possesses an innate ability to understand the mechanics and strategies in any game he picks up. The Swedish superstar with that crazy personality and excellent aim has excelled already in Overwatch and will continue to entertain, even if nothing else.

KnOxXx and numlocked from Creation eSports were the driving force and joint in-game leaders behind the greatest European team of all time, Epsilon eSports, during 2013/2014. Their incredible knowledge of the game and at times preternatural calling led to them being untouchable during that time, and at the top of the scene for years at either side. They have both thrown themselves into Overwatch with the same zeal and analytical style.

Graviton Surge contains Zebbosai, one of the best hitscan and projectile players during his many years playing in top 3 teams within TF2. As recently as early 2016 he played in the best team in Europe, and is accompanied on Graviton Surge by kr4tos, a player whose best results put him at 4th in Europe for a short while, but has a huge amount of dedication. Interestingly he also always plays in surgical gloves, which used to baffle and amuse us all. It's the little things.

Melty, who blasted out of the gates in the beta and have since slipped off slightly, have four players who played in the best French teams: DeGuN, baud, NiCO, and Flippy. Flippy particularly was famous for his unbelievably Sniper play, and was indisputably the best Sniper in the game in his time.

SG-1 also have four players remembered as legends within the TF2 scene; although they haven’t played for a number of years, their experience and success in TF2 drove them back to the so-called “successor”, Overwatch, and they are enjoying a revival.

Tseini from Bongo Beach Boys was a great Sniper, though his play on other roles and understanding of the game left him as a relatively one-dimensional player. It remains to be seen whether he can adapt to changes in the meta in Overwatch should Widowmaker fall out of fashion. Experiment’s evokje, an experienced multi-classer in TF2, is also finding some success in Overwatch as support.

Over in North America, it’s a similar story. Half of the EnVyUs and Luminosity teams have previous TF2 experience, along with players in Liquid, Gale Force Esports, FIGM, and Northern Gaming Red. Most of these players were part of the Mixup roster in TF2: Luminosity’s Seagull, enigma, and milo; Liquid’s dummy and mesr; Gale Force’s harbleu; and FIGM’s PYYYOUR all played at one time for the Mixup dynasty, who won five seasons of ESEA Invite and a world championship. Their team, especially Seagull, enigma, and PYYYOUR, were known for their intelligent play, deeply analytical and thoughtful approach to the game, and superlative teamwork. These were some of the greatest players in North America and the world, and after the death of Mixup in Overwatch have spread far and wide to compete against each other and are sure to provide great storylines.

The other North American players from TF2 include FIGM’s flame, and clockwork, who was by far the world’s best Scout with incredible tracking and timing. Northern Gaming Red also has Mangachu, a previous TF2 Invite player who wasn’t afraid to mix up the meta frequently with interesting role choices, preparing him for the flex role in Overwatch.

The players from EnVyUs, who are European in origin but now play in North America, include cocco (a very old-school player who didn’t rise as quickly in his time in TF2); harryhook, who played the fast-paced and heavily movement based Scout class and appears to have set him up perfectly to play a very difficult to hit Lucio; and of course Taimou, who was renowned for his flashy support plays before moving on to Shootmania and Dirty Bomb where he perfected his hitscan aim as well.

As somebody who has followed TF2 for a long time, it is heartwarming but slightly strange to see faces I’ve watched for years be lauded by a much larger audience for their gaming talent. And there is a huge amount of talent: although very casual to the outside viewer, TF2’s Quake-based movement and aim mechanics lends itself to aiming in Overwatch, and some of the best players in the game currently were just as incredible at TF2.

There is no comparable “esport” whose top scene was cannibalised in a similar way; one could point at games such as Firefall or Dirty Bomb, but those games were smaller both in terms of the playerbase that existed prior to Overwatch and the amount of players who moved over. To give an idea of how this has affected the upper echelons of Team Fortress 2, one could make a team comprised solely of Overwatch players and it would be the favourites for the title of best in the world right now. There’s a very good chance that some of the players who have left for Overwatch are still the best in TF2, even without playing it for months.

TF2 recently started to get competitive support from Valve, though nowhere near the level of its brethren CS:GO or Dota2 - or the support from Blizzard presumed to follow Overwatch’s release. The lack of support and growth within TF2 is a large reason for the exodus, and with so many top players leaving this is likely to create a spiral of more top level players leaving for Overwatch. A lot of these players have incredible aim and a natural ability to understand flow and decision-making; we could see a consistent trickle of familiar faces entering the top scene of Overwatch in the coming months. There are already teams being formed with a combination of star TF2 players, and more who are going to be interested in grabbing a piece of the Overwatch pie.

TF2’s loss is our gain, and these players will be more motivated to perform in a game that, for once, has a sustainable effort/reward ratio. The fierce competition, amazing individual levels of skill, and awesome narratives that these moves provide for Overwatch is what will keep me interested for a long time.

Which is more important in Overwatch?