RTS Community Manager Karune just posted a lengthy StarCraft 2 update, including unit and building design changes, the latest (49th) batch of Q&A. Without further ado, we leave the word to them:

Art Updates
The StarCraft art team have been making massive updates to the Zerg faction, adding various new animations and improving even further on the textures of Zerg units and buildings. A picture is a thousand words so check out the updates for yourself! 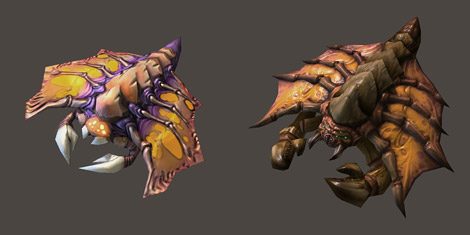 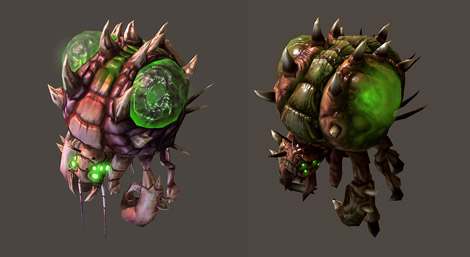 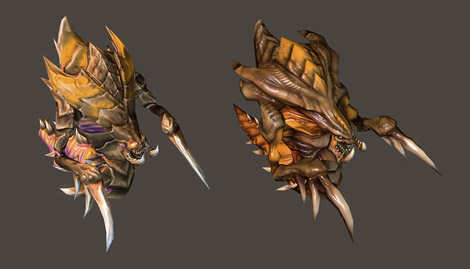 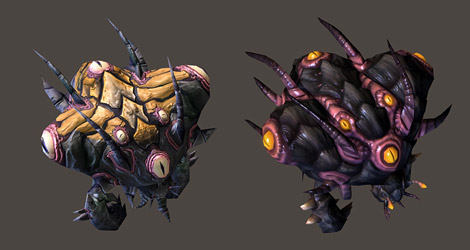 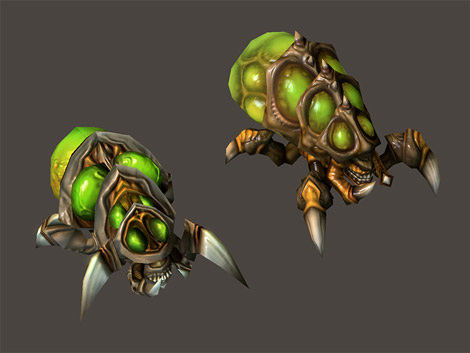 Throughout the development process, the team is constantly reiterating and improving on the game in every way. As mentioned before, the Infestor too is getting a makeover, becoming much creepier and intimidating – you definitely don’t want to end up helpless at the will of this thing! 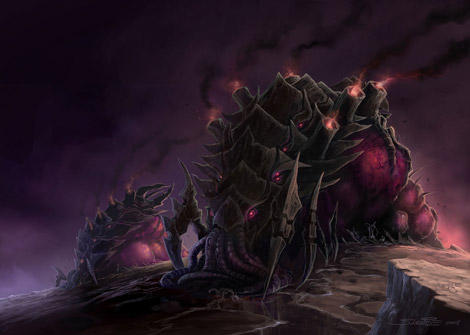 The StarCraft 2 team has made a number of changes in each of the races as the game gets closer to Beta. These are some of the new weapons and abilities that are currently being tested on the battlefield.

Protoss Dark Pylon
Long used only by the Dark Templar of Shakuras, the Dark Pylon is now used by all as the Protoss war for survival becomes more desperate. In addition to providing supply and giving power to nearby Protoss structures, the Dark Pylon has several unique abilities that require energy to use.Proton Charge: an area-of-effect ability that gives all targeted Probes additional charge for their Proton-Cutters. Probes that have an additional charge gather additional minerals per trip when collecting resources. The Proton Charge lasts only a short time before dissipating.

Null Shield: a single-target ability that causes a Protoss Shield to shimmer and warp, cloaking the targeted Protoss unit. The Null Shield lasts only a short time.

a single-target ability that transfers energy from the Dark Pylon to any energy-using Protoss unit.Screenshot: Proton Charge in Action 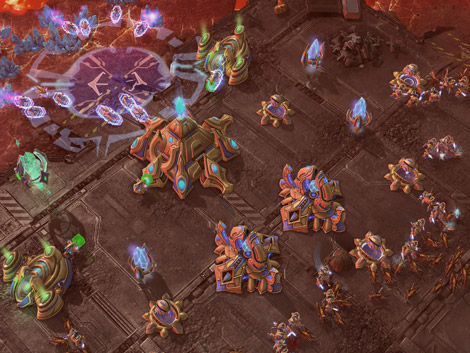 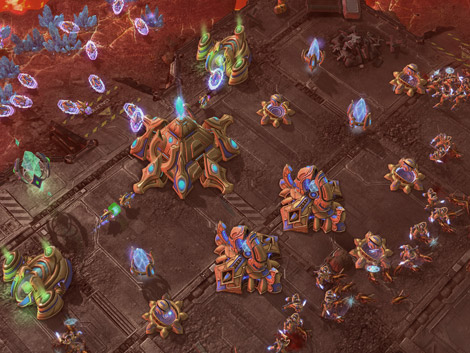 Terran Orbital Command
The Terrans rely not only on the troops they can train on the battlefield but also on troops called from deep space. The Orbital Command allows the Terrans to make use of their orbital assets to support their fight on the ground. As an upgrade to the Command Center the Orbital Command can create SCVs and serves as a drop location for collected resources. In addition it has several abilities that require energy.Calldown Mule: sends a single automated mining robot by drop-pod that assists SCVs in collecting resources by working around current SCV mining operations. Unfortunately the Mule is still in the prototype phase and has a limited battery supply (timed life).

Calldown Extra Supplies: sends additional supplies to a targeted Supply Depot. Generally used by Terran commanders only in an emergency to allow them to support additional troops.

Scanner Sweep: using a satellite in high-orbit, the Terrans reveal a large area anywhere on the map and detect all cloaked units within the target area.Screenshot: Mules Everywhere! 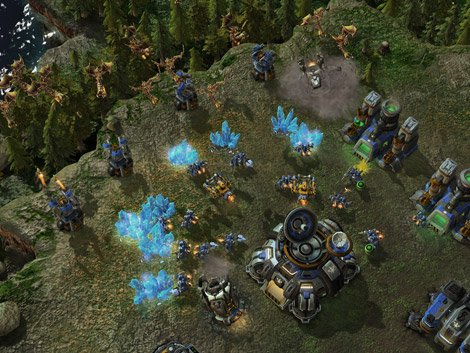 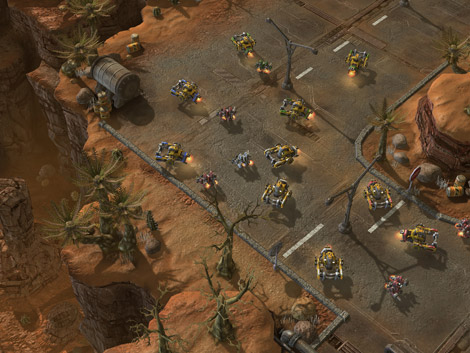 Zerg Queen
The Zerg Queen has continued to evolve over the last few months. She is a fierce defender of the Zerg Hatcheries and can often be found in small groups defending the larger Zerg infestations. In addition to defending her Hatchery from ground and air threats, the Queen has several special abilities that require energy to use.Build Creep Tumor: with a mighty push from her bowels, the Queen creates a cluster of organic tumors that generate additional creep. In recent months the Zerg have mutated to move more quickly on creep, making this an important function for the Queen.

Spawn Larva: by injecting Queen ichor into a Hatchery, Lair or Hive the Queen can cause the Zerg structure to undergo a startling metamorphosis. The Hatchery starts to throb and green sacks swell up on the structure. Eventually four additional larva burst out of the Hatchery and land next to whatever larva are already wriggling around nearby. While a Hatchery hosts more than 3 larva, the Hatchery will not spawn additional larva, until that number drops below 3.

Razor Plague: with a great breath the queen exhales a cloud of tiny Zerg creatures that create a vast swarm nearby. These creatures attack all enemy creatures within their swarm, doing additional damage to biological targets. What makes it worse is the Zerg player can control the swarm, moving it around to attack whatever enemies he wishes until the swarm becomes exhausted and dissipates.Screenshot: Incoming Swarm! 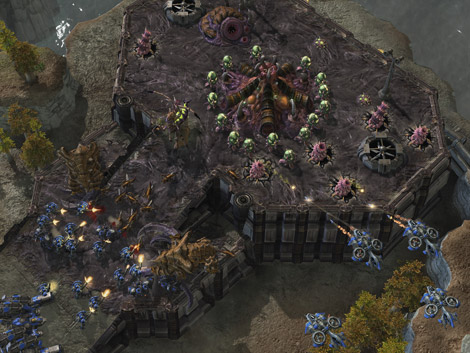 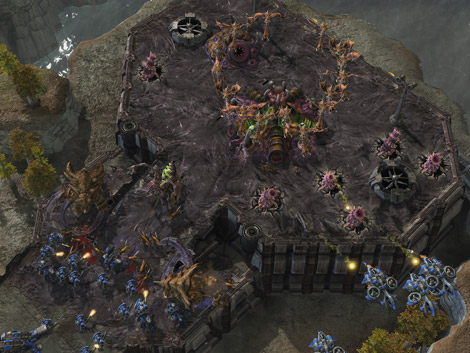 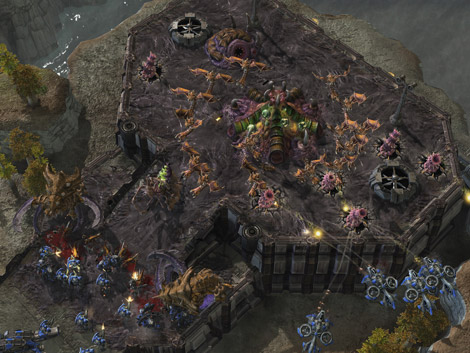 1) I am very curious... previously, SCVs, Drones, Probes, Vultures, Archons, and Dark Archons hovered above the ground so they were not hit by mines. My question is simple: Are there any hovering units in Starcraft 2? If there are, can they hover over shallow water? -Ancientdefender (Battle.net)
- If Spider Mines stay in the game, then there will be hovering units. Shallow waters are currently just a visual effect and will not ‘play’ differently.

2) How does the Mutalisk attack work in StarCraft II, what defines its bouncing pattern? Is it random or not? If not, what is the criteria that defines how it bounces? -Kain175 (Battle.net)

- Regardless of the position of the Mutalisk, when its attack hits a target, it will then acquire the next target based on proximity to the first target. The attack will always bounce to the next closest target.

3) Is it possible to toggle off Multiple Building Selection (MBS)?
- No.

4) Balancing of 2v2 team play: Roaches + Medivac are too over powered for 2v2 team play unit combinations?
- The regeneration rate of the Roaches and the healing of the Medivac will not stack upon each other.

5) What is a good counter for Zerg against Marines, which are upgraded from the original StarCraft?
- Zerg actually have a few options that are quite effective. Zerglings can catch Marines out in the open and surround them relatively easily. Secondly, Banelings with the burrow ability are also very effective. There is nothing more gratifying than watching a group of Marines walk over a burrowed Baneling. When it unburrows – BOOM! Another counter that can be used are Roaches with burrow. A player can burrow a Roach at low health for it to regenerate back to full health in seconds, at which point it can unburrow and begin attacking the Marines again.

In late game, Infestor’s with their fungal scourge ability, which causes a biological unit to take damage over time until the unit explodes and does an area of effect damage, decimating groups of Marines easily if the opponent is not fast to react. Additionally, Ultralisks with their new cleave attack as well as 200 more hit points from the original StarCraft also make them an excellent counter to massed Marines.

6) How do you keep the Baneling from exploding on targets that you don’t want them to hit?
- The Baneling now has an ‘attack building’ ability now which allows players to have more control over what the Baneling attacks. Players no longer need to worry about Banelings accidentally exploding on a building when they actually wanted it to hit a unit.