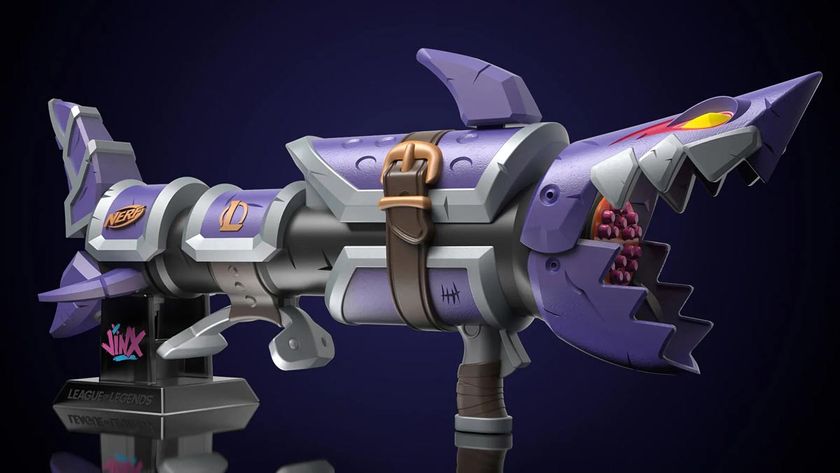 Jinx is getting Nerfed, but not in the way you think.

Nerf and League of Legends are teaming up to bring Jinx’s shark-themed rocket launcher to life. The rocket launcher is named Fishbones, and it looks like a big purple shark that Jinx mounts on her shoulder to fire off rockets. Arcane viewers might remember Jinx committing a light massacre with Fishbones in the first season finale.

Here’s what Nerf’s version of the gun looks like:

The Nerf LMTD League of Legends Jinx Fishbones Blaster is this thing's official mouthful of a name, and it's now available for pre-orders on Nerf’s website up until January 3, 2023. Nerf spared no detail in bringing this gun to life, from Fishbones’ yellow-streaked eyes to the belt wrapped around its armour plate-like body. The blaster measures over 35 inches in length, so you might have to clear out some space to put it on display. The gun’s huge shark-like jaws can be opened or closed depending on the level of violence you’re feeling up to.

This Nerf blaster is being produced as more of a collectible for hardcore League of Legends fans with a pretty high pricepoint: $170. At that price, you might not be willing to take it out and actually use it too often, but at least the blaster comes with a special Jinx-themed display stand for safekeeping. While the blaster may look like a rocket launcher, it’s really more of a pump-action rifle in practice. The blaster has an 18-dart capacity drum with six clusters of three darts, which means that each pull of the trigger fires off a three-dart burst.

Be warned that the Fishbones blaster will only start shipping out on December 1, 2023 - which means that it won’t arrive in time for this year's holiday season. This is Nerf’s first League of Legends-themed blaster, but the toy company is no stranger to collaborations like these. It’s also made Din Djarin’s Amban Phase-Pulse Blaster, Halo’s Needler and a few Fortnite weapons into Nerf guns in the past. How tempted are you to pick this up?

Asian Board Games Festival 2022 kicks off in Singapore this month