In the wake of the outcry from the eSports fanbase, IeSF has decided to revoke its previous rules, banning either gender from competing in certain disciplines.

The story begins a day ago with a screenshot of the rules for the IeSF World Championship Finnish Qualifier for Hearthstone to be held in Helsinki, Finland, which stated that eligible for participation are "Finnish male players only". 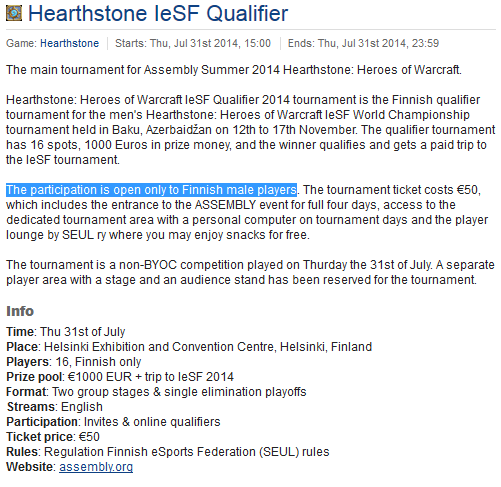 To no surprise, that didn't sit well with the community which saw the banning of an entire gender for what's supposed to be a global event as ridiculous. The head admin for the qualifiers in question - Markus "Olodyn" Koskivirta - didn't help remedy the situation much as he told PC Gamer that the banning of women from participating in the event is to avoid the risk of a female gamer qualifying for the World Championship this November, which is, apparently, male only or at least it is so for Hearthstone.

A trip to IeSF's Facebook page still holds evidence that the organization does fancy its gender segregation as a pinned post proudly lists the game titles for the World Championship, dividing them into male and female disciplines as follows: 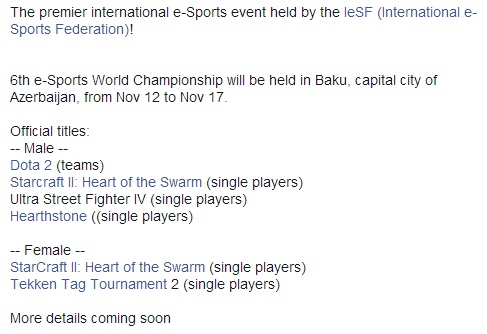 As silly as it sounds, this division is nothing compared to IeSF's statement regarding it, saying that this is done "in accordance with international sports authorities, as part of our effort to promote e-Sports as a legitimate sports," none of which makes any actual sense.

In under a day, the reddit thread about IeSF's weird decision acquired close to 500 comments and is still sitting on the front page of /r/hearthstone. It received even bigger response on /r/games and currently the thread is at 1,150 comments and upwards of 1,400 upvotes.

Grasping the community outlash and "convoking an emergency session of the board", IeSF came out with a statement today that they'll be opening all World Championship disciplines to all genders. Additionally, two strictly female qualifiers will be held, one for StarCraft 2 and one for Tekken Tag Tournament.

The Finnish Qualifiers will take place July 31st during the days of Assembly Summer, while the World Championship itself is scheduled for November 12-17 in Baku, Azerbaidzan.