The WCS hero of the United States Suppy faced elimination in last night's SHOUTcraft America matches and followed MaSa out of the tournament.

On May 3rd, Suppy entered WCS America premier league to play the matches that would make him the only American to advance to the Ro16, destroying Korean Terrans Heart and Ryung 2-0 each. With the momentum hugely in Suppy's favor, the scene expected an equally dominant run through the all-American SHOUTcraft Group C.

Placed in the company of Masa, Hellokitty and Kane, Suppy became the focal point of. arguably, tournament's biggest upset after the 0-2 elimination of USA champion Vibe. Suppy started by dropping a 0-2 game to Hellokitty and had to beat Masa in the losers match with the same score to keep his tournament life for a short while. As the group developed, however, he was once again forced to play Hellokitty - now in the final match of the group - and although he managed to take the set lead early on, ultimately Suppy could not overcome his old foe.

Thus, Suppy finished third in a group toppled by a Canadian underdog Kane, followed by Hellokitty as second. Both these players will learn their opponents for the quarter finals after the completion of Group D on May 17th, featuring qxc, State, Xenocider and rsvp. 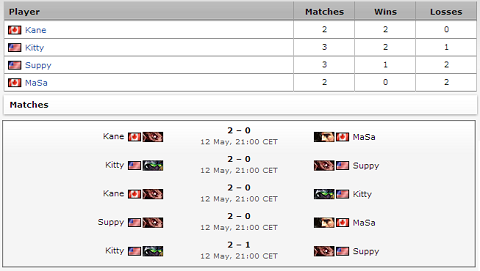