Liquid and Fnatic.EU has qualified into the playoffs of The Premier League. Two remaining spots are left for Alliance, Empire, VP, and Dignitas to grab.

Team Liquid and and Fnatic.EU continued their hot streak in week nine of The Premier League IV as they top the standings once again. With this win, Liquid and Fnatic.EU has secured themselves a spot in the playoffs.

Empire and Alliance remained in their third and fourth position respectively and their playoffs spot are more or less secured unless both Empire and Alliance lose both their upcoming games and Team Dignitas and/or Virtus.Pro win their next. It is unknown what TPL will do in this situation but it is possible that more games have to be played to settle the tie. 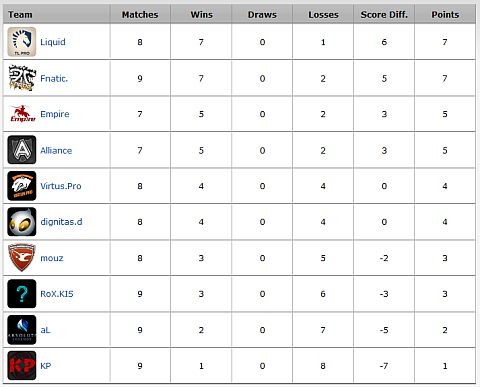 The four remaining matches in TPL's regular season are crucial ones to determine who will be joining Liquid and Fnatic.EU in the playoffs. The first game of the week and probably the most crucial one, Liquid vs Alliance will start at 20:00 CEST today.