EG take the lead after W2D1

Revenge matches and fresh blood - this was the theme for W2D1 at the European LCS with teams like EG, SK, Gambit and Dragonborns.

What started as a very even and calm game drastically changed as push came to shove for Dragonborns after an ill-advised fight at baron. Engaging at horrible angles without their Leona and scattering themselves too much put Shushei’s team in an awkward disadvantage, one Dragonborns could not overcome. EG immediately took control of the entire map, warding offensively and quickly pushing towers to deny DB even more objectives. Once Kayle and Renekton grew strong beyond comprehension, EG issued the killing command. The Geniuses flew in with such power that even Hosan’s Draven – the best performing champion on DB – could not stop.

In a revenge match from last week, SK crossed blades with Copenhagen Wolves and suffered a painful early game before they could recover their stability. With a very tanky frontline of Elise and Cho’Gath and increasingly scarier Kayle, Wolves were looking forward to some big plays in front of SK’s mid inhibitor turret but that is where things took a 180-degree turnaround. SK’s Renekton and Jarvan dove hard on Wolves’ carries and weakened them just enough so that Ocelote and his Kassadin can fly in for the clean-up. A triple kill for the Spaniard was enough to put SK back on the map and with a couple more brilliant team fights to their account the match was theirs.

Eager to make a spectacular debut in LCS, aAa bullied Gambit into three death towers by the 13th minute mark but, unfortunately, this is as far as they went. Unable to make push this advantage into a more game-changing one – like a dead or at least open inhibitor – aAa started losing ground, and quickly.

Once late-game came, it was a field day for Gambit Gaming. Alex’s Karthus and Darien’s Kha’Zix were unstoppable, dishing downright rude amounts of DPS that melted the overall squishy composition of the Frenchmen.

The second revenge match for the night featured nothing less than the EG/SK rivalry and once again the two teams were at each other’s throats. SK took the first kill but EG were quick to respond, equalizing the score and snatching the first dragon. Although the kill score remained balanced for the entirety of the game, though, it was the laning phase and team composition that won the Geniuses the game. Outfarming SK everywhere and having a most potent Lux which could easily one-shot SK’s Twitch, EG marked and took down SK’s turrets one by one. Aside from one bountiful fight at baron, Ocelote’s team felt helpless – the AP Nidalee did not work for them at all and getting caught by Lux combo meant unconditional death for anybody. As they tightened their grip more and more, EG were able to secure their revenge victory and top the table after W2D1. 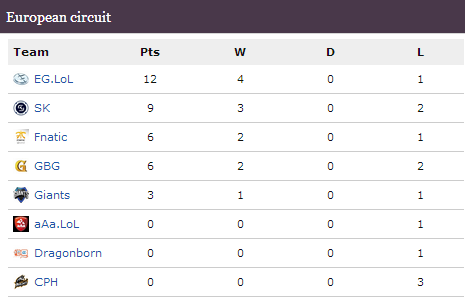