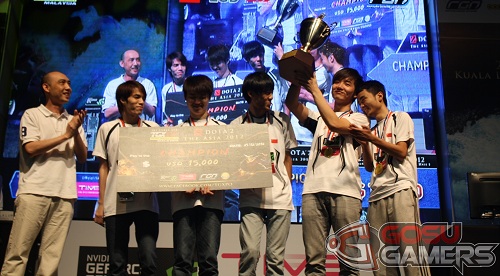 LGD put up an impressive performance this afternoon especially considering their defeat at the hands of MUFC only yesterday. MUFC could not rebound from their 20 minute first game loss and were handily dispatched in two games. LGD walk away with $15,000 in cash and the championship title.

MUFC risked their opening game of the match opting for heroes that was unpicked through The Asia, including Death Prophet and Necrolyte. A lineup that emphasized the midgame caused the Malaysian powerhouse to play incredibly passive in the early game, where they were picked off by xiao8's Beastmaster and Yao's Bounty Hunter across the map.

Sylar's Lone Druid had a 17 minute Radiance, and despite two back to back teamfight where Brewmaster had a perfect clap initiation, it almost led to full teamwipes of the MUFC side. At a mere 21 minutes, MUFC called out the GG and awarded the first point to LGD.

LGD decided to run the same core lineup with Beastmaster and Lone Druid in game two, while MUFC decided to go head to head in the aggressive trilane again. This time, however, MUFC was successful in taking kills of Sylar's Lone Druid as both Beastmaster and Invoker showed their presence at the botlane. The game was still even at 12 minutes with a killscore of 8-8.

The mid game went phenomenally for LGD - Yao's Shackleshots was able to catch MUFC offguard with amazing pickoffs and a team wipe at 21 minutes. Sylar was almost unstoppable and Lifestealer, on the other hand, was easily disabled by Beastmaster's Primal Roar and Shadow Demon's Purge.

With a second push into MUFC's tier 2 tower at bot lane, the Malaysian powerhouse opted for a smoke gank from behind but they still got team wiped. The dire sensed that they were out of the championship, and forfeited the match to the first TGX grand finals champions LGD.