"We will always try to take the our flag to the very top" - uE.Domy 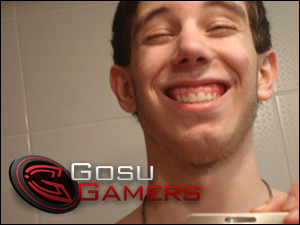 After beating the American giant eZ Style in the ROCCAT GosuCup 4 to advance to the semi-finals, we decided to interview uE's team-leader: Domy. He shares his thoughts about his team's skill, the South American scene and their rivals.

Note: Our own shostakovich made an analysis of them before their clash against eZ, you can read it here.


Just when the world was forgetting about Brazilian DotA, you guys popped-up from nowhere and took out America's strongest team, eZ Style. How did you do that?

Actually even the team was forgetting about DotA itself, we weren't practicing anymore, almost everybody was playing other games such as CS or StarCraft. Some days before the eZ match I downloaded some replays available from them on GosuGamers.net and studied their play style; on the match day we got together and I told them (my team) about some of the things I saw on the replays. We practiced one match before the game and everything went alright for us.

Tell us a bit about uE's background. People may remember brT from the successful team paiN!, but the rest of the squad is not really known. Who is who and what's their role in the team?

As you saw in the past games me and Dias play mainly the support roles, brTT is usually carry or the more farm focused hero, as for 4Dr and esa-, they play the semi-carries. tellmeyourwish (Darky from CNB) played as stand-in for us, while brTT was at IEM playin CS for team semXorah.


When and why was uE assembled? Teams like paiN or CNB decided to step-out of the competitive scene, why isn't this the same in your case?

Actually we were stepping out just when the GosuCup was announced, so we decided to play it as a last major attempt to put Brazil on top. That is and will always be our motivation for playing in these international kind tournaments. Despite lag and other issues we will always try to take the our flag to the very top.

You guys are giving quite a show so far, not dropping a single game in all your encounters during the event, even against strong opponents. What's your strength? Is it training/practice?

I think it is mostly our skill level which, in my point opinion, is high enough to compete against most teams around the globe. Also, the team itself have a lot of confidence under my drafting and making the right choices in important moments of each match. After every game we reunite to discuss our main errors and failures, but so far from what I have seen, we have never made the same mistakes again. We do a lot of "pubbing" during the week; we don't practice that often as we usually play 3 or 4 clan wars on weekends and in any tournaments that are available.

uE brought back some forgotten heroes like Panda, Sven and Lion. Why did you pick them in your games?

I just felt in the mood of picking Sven cause he is such a boss hero; he stuns and get double damage whenever he wants... What else can you ask for from a support hero? As for Panda, he is just an all-rounder that we needed in that game, [he has] slow, miss, disable, dps, everything we could have wanted in that match in particular.

Do you guys play in other other tournaments besides the GosuCup?

Only in other minor tournaments from the South American scene (mostly from Argentina or Peru) just so our form doesn't go cold. We need to stay warm and ready in order to perform nicely on GosuCup.

Do you consider that any other SA team can hit the European scene as hard as uE?

No, I don't. SA teams are really immature and don't stay together enough, so they have bad teamwork. SA also lacks good team leaders to run their team through the drafting and lead them to success.

You will face Virus/.exe in the next round, any particular thoughts on them?

I feel that the New French Order (Virus) had great improvement with Garter added to the roster. As for .exe, hexOr is a great player and probably a nice team leader, so we will be prepared for either of them.

I think that Virus will advance, because they have more experience at LAN tournaments, and seem to play more as a team and less as high-level players united under a tag. I'm not saying that .exe will lose - I really think its 50-50, at maximum 51-49 to Virus - I just want to take a side on this. Shoutout to neNo, a great support and friend!

What are uE's plans for the future? Will you immediately move to Dota 2 after GosuCup or you will stay for a bit longer in DotA? the

I must confess that we don't have Dota 2 beta keys. Only tt and me are playing (under friends accounts), so if anyone can help us with that it would be pretty handy for us. We will play DotA for as long there are tournaments running, and move to Dota 2 as soon as we get those keys.

We're reaching the end of the interview. Thanks for your time Domy, any shoutouts?

Shoutout to Arquinze (former major player who went to Australia to study), to 4dr's internet connection which doesn't let us play in Europeans tournaments, to Esa's Panda (the best from brazil). FAITH members, specially 2008, who helped us with some practices, our rookies fireziN and w0lv (one day you will get good, just keep on rockin'). Last but not least, to fans, supporters and my parents.

Links
eZ vs uE Pre-Analysis - by shostakovich
GG Replay Center - uE's games
Bruno “AWRNSS” Justo
21 yo dude from Argentina. I love cats, football, grills and Doto. I've been around since Silencer used to throw golems and top tournamens were for 500 USD. I now write articles looking-down at 300,000 ones and I still don't know what the hell Oracle does.
Share Tweet
66 people reacted to this post