G-League Season 2 has a winner After a full five hours of competition, the final call of "GG" was issued as WE forfeited the championship over to DK. At 15:30 CET, DK were officially champions of G-League Season 2, and they take home a well-deserved 150,000 RMB ($23,500). 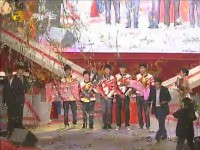 However, World Elite should be duly commended for their performance at the Grand Finals, dragging each of the four championship games past the forty-minute mark without a clear sign of a victor. As the underdogs of the competition, they have definitely proven themselves as a force to be reckoned with and future competitions may just see a new uprising of the WE boys under 820 and 2009.

*Winners of each game are underlined.

Nevertheless, it was stunning resistance and outstanding team work that brought DK the victory, albeit in a tight and nail biting fashion. As soon as the last of the bottom barracks fell for WE, the DK players shot from their seat as a new champion(s) was crowned.

And given how hard they have all worked for it, what a bittersweet victory it was.