Chris "HuK" Loranger wins the NVIDIA StarCraft 2 GosuCup after a tremendous comeback from a 0-3 gridlock. And after taking a more aggressive stance in the remaining four games, the Canadian could add another tournament title to his list of achievements.

The Canadian Protoss was placed in a tough position after the three first games. The second game was a close one, which only ended after the Frenchman Adelscott defended exceptionally well at the 14-minute mark with a good flank from the left side. Prior to it, HuK was forced to defend against Adelscott's early 4-zealot push which he barely got out of alive.

The first (Lost Temple) and third game (Scrap Station) were both rather short-lived. HuK went for a 5-gate on Lost Temple while Adel opted for a fast expansion only after five minutes. With opportunity in hand, HuK pushed out a couple of minutes later, but Adel was able to hold it back with a photon cannon, and could counter and push HuK back in to his base. The fast expansion makes the difference, and the final push from Adel ends with many French units left while HuK called it good game.

The third game HuK went for a fast tech by putting down two assimilators already in the second minute, opting for 2-gate robotics facility and robo bay while Adel went for a 4-warp gate strategy. With a big stalker army backed up with zealots, Adel stormed out at the seven minute mark and outnumbered the lonely colossus HuK had managed to produce from his tech friendly but macro weak build order.

Enter the comeback of HuK. The Canadian picks Steppes of War, once again goes for a tech-friendly build order, whooping down two assimilators after three minutes. Adel put some heavy pressure with four zealots which later got backed up by two stalkers which forced HuK to pull some probes to surround Adel's army effectively. Needed to act defensively, HuK stayed in his base opting for robotics facility to get some colossi out. Adel on the other hand added three more gateways, eager to break the defense. After seven minutes Adel went for another push, but HuK could defend well enough to cut Adel's unit count in half. With a second colossus out, HuK then opted for the final push which turned a too tough a task for Adel to hold. Adel writes "WP" and sees the clean-sweep opportunity head out the window. 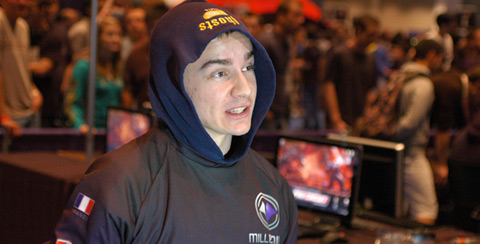 HuK at MLG Raleigh. Photo by: MLGPro.com
Adel then picked Blistering Sands, and both players once again went for fast cybernetics core, with HuK's second game warping in a little bit ahead. Adel once again went for the very popular 4-gate strategy while HuK did not want to be any worse and put down five gateways. At the six minute mark Adel gets a move on and goes for a push to destroy the rocks at the back entrance of HuK's base. After pounding the rocks they finally caved in, and Adel splits his army in two to attack from to fronts. HuK, quickly aware of what went on, defended both fronts nicely which forced Adel to retreat. But HuK, hot on his tails, placed some nice force fields and therefore blocked Adel's retreat to kill the remaining forces of the Frenchman.

The sixth game starts as a complete mirror match on Delta Quadrant. But at the seven minute mark Adel destroyed his rocks in the back of the base to get his natural expansion. Both players opting for a pack of colossi, and two minutes after the expansion attempt from Adel, we saw HuK's first Colossus outside Adel's base who was yet to finish his. after going in and doing some unit exchanging, HuK backs off. But only to come back again at the 10-minute mark with warped in zealots on Adel's expansion while entering the main army in the front. HuK goes for a tactic retreat after the expansion has been destroyed from the harass. And while HuK planned to build up his own natural expansion, Adel went to harass it with some colossi but was met with a much bigger colossi army and had to concede the game.

Last game, last chance for Adel to turn this around. But it ends with HuK tearing Adel's army in half. HuK opted for a 4-gate, with Adel going 3-gate with a twilight council when we close in on six minutes in. Both players push out at the same time, and when Adel caught a glimpse on HuK's bigger army he felt the need to retreat. HuK saw no reason to back down, and engaged forward with his zealot and sentry based army on to Adel's base. Adel, with mostly stalkers to defend with, were caught getting his army cut in half due to a set of nice force fields. With no options left but to concede, Adel leaves the game after a 'gg'.

The bronze final between ajtls and Socke will be released in VODs at a later date due to some unplanned schedule difficulties. GosuGamers will keep you updated and let you know as a time has been decided.