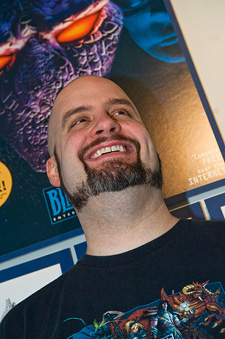 After 20 days of the StarCraft 2 beta, Dustin Browder opens up in an interview where he talks about specific balance trends, the ladder system and more.

- "What we’re definitely seeing right now is a general weakness in Terrans versus Protoss and Zerg, and this is from stats we have internally. The most interesting thing to us at this stage of the beta is less of what people think is wrong than what we can actually prove is wrong," says Dustin Browder.

He further mentions they are going to change the maps a little bit to see if they will get any different results.

- Terrans being down is something we’ve started to address and we’re going to continue to address in the coming weeks, he says. Dustin Browder (left) with Kevin Yu and Samwise Didier.
No real damage done to the projected game release
Aside from this issue, Browder reveals they are close to a 50 percent win ratio for almost every race, and that they haven't found anything that has done any real damage on the projected release date.

- What we're really doing right now is waiting to see, as the community learns more, to see if something changes in the meta-game that causes this not to be the case. And, of course, we're still dealing with issues of unit diversity, particularly on the Zerg side. But so far, no real damage from the beta per se. Things seem to be going pretty well.

We also find out that the beta includes 9,000-something players at the moment and that Blizzard's goal is to have 10,000. However, should the activity on the current beta players go down, they will send out keys to new contenders in order to maintain the cap.