StarCraft 2 to have 'mini-games' called Challenges 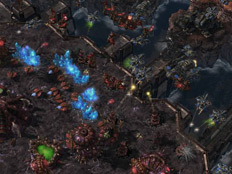 Reports say that Blizzard is planning on releasing a new feature called Challenges, which seems to be some sort of mini-games feature for practicing.

- It's basically very specific situations that allow players to get ready for the sort of things you might want to be thinking about when playing multiplayer, said Lead Producer Chris Sigaty to IncGamers.com.

It is also revealed that these will include simple tasks like learning efficient resource gathering to more advanced aspects like unit countering and micro management. But this is not planned to be released with the beta.

- It's a shipping product, it's not meant for beta, added Sigaty.

This add-on was developed because the single player will not be as much of a training ground for multiplayer gaming.

- The requirements for a very competitive player is different, said Sigty and explained that the single player missions will be more complex than just razing your opponent. The single player campaign will most likely have more puzzles of the sort.