Zuo Ming-Hao China 0
Zuo "LvMao" Ming-Hao (Hanzi: 左名豪) is a League of Legends esports player, currently support for JD Gaming. He was previously known as Zzjm. LvMao spent some time on LSPL teams which included Star Horn Royal Club, ZTR Gaming and Now or Never. He never achieved particularly good results with any of those teams and did not qualify for the LPL. He left Now Or Never and joined the newly formed JD Gaming in May of 2017. Their first showing was at the 2017 Demacia Cup but it wasn't particularly good as they placed 9th-12th after an 0-2 loss to LGD Gaming. In the 2017 LPL Summer Season JD Gaming finished 5th in Group B with 6 wins and 11 losses which eliminated them from playoff contention. They also placed 2nd at the National Electronic Sports Tournament 2017.
Notifications 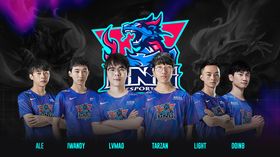