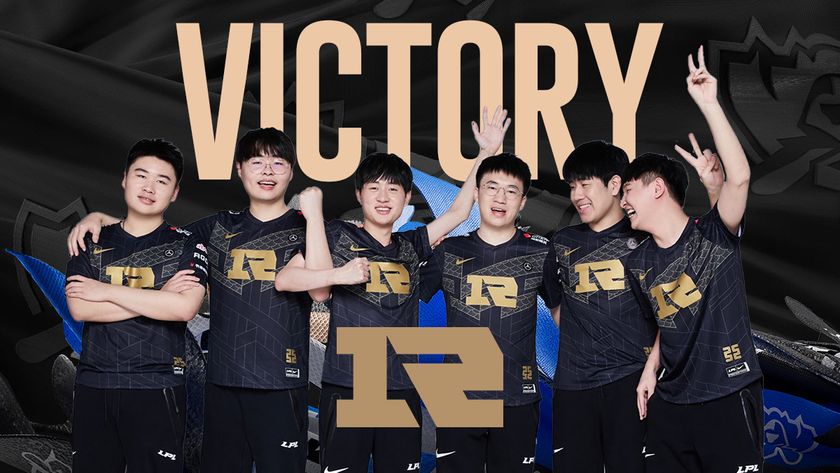 MAD Lions lost to MSI champions Royal Never Give Up on Day 2.

The penultimate match of Worlds 2022 Day 2 was an exciting one: MAD Lions versus MSI champions Royal Never Give Up. RNG took the win on this one, leaving MAD hopelessly unmatched after a devastating series of early game losses.

MAD came into this match with an unbroken 2-0 winning streak, but in theory, that streak would be facing its biggest obstacle yet in RNG. RNG has proven itself to be a fearsome group of talent after its performance in MSI, making it all the more important that MAD clinched a win here. Both teams got off to a slow start, but things came to a head over the Rift Herald with RNG scoring First Blood - only for MAD to return the favour seconds later.

Both teams backed off and RNG picked up a dragon, with MAD seemingly unwilling to contest until after the fact, jumping right into a fight that saw RNG walk away with two more kills and tilt the early game in their favour. MAD pushed into the second Herald of the game, but RNG held it off with nine kills to MAD’s four. Not even 20 minutes in, it was clear that this was RNG’s match to lose. The team had turrets downed left and right and MAD was just struggling to defend its objectives, let alone push into RNG territory. Map control was not MAD’s forte here.

7k gold and seven kills behind, MAD entered the lategame with surprising aggression, contesting every dragon and objective RNG pushed into. It still failed to actually stop RNG from picking them up, but an attempt was made at the very least. This team was on a backslide, and it needed to either make some big plays or count on RNG making a critical mistake, even if the latter seemed incredibly unlikely. Another teamfight rolled in at the 23-minute mark, starting with RNG’s Gala slaying Unforgiven and ending with MAD’s Armut managing to get a Double Kill making it a decent play for MAD overall. This was the kind of performance demanded of MAD against RNG, but the team might have risen to it too late.

Half an hour in, things looked dire for MAD. RNG had 19-9 kills, and 10k more gold to boot - not to mention all of the game’s dragons back-to-back. To MAD’s credit, Armut did show up time upon time again to score kills during big teamfights and live to walk away from them. RNG made a big push into MAD’s base and took three inhibitors in the span of 15 seconds, going on to take the win in an incredibly unbalanced match.

MAD was rubbing shoulders with DRX to lead Group B of the Play-ins before this match, while RNG strutted in with a loss under their belt. Despite that, MAD has proven itself to be the weaker team in this matchup - though there’s plenty of time left for redemption. The final match of the day sees DRX go up against Istanbul Wildcats!

Worlds 2022: DRX steamrolls Saigon Buffalo after uneven match to pick up a win

Worlds 2022: Evil Geniuses scores second win of the day against Beyond Gaming

Worlds 2022: DetonatioN FocusMe gets their first win on the board against Chiefs Esports Club