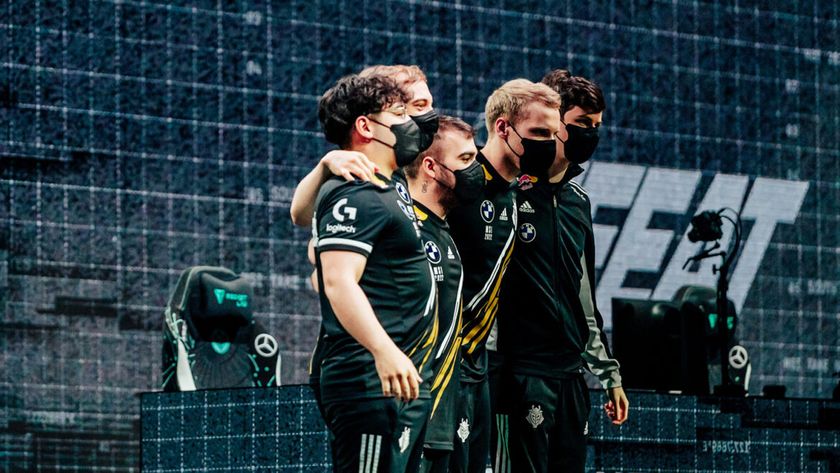 Day 8 of MSI 2022 ends with G2 Esports and Royal Never Give Up dominating the Rumble Stage.

We’re two days into the Rumble Stage of MSI 2022 at this point, and after a series of eventful matches, it looks like G2 Esports is on track to come out on top. There’s plenty of time for the other four teams to catch up with three days left, but it’s not looking good for Saigon Buffalo right now. In case you missed it, here are the teams fighting it out in the Rumble Stage right now:

We’re kicking off our recap of today’s matches with the first game: EG versus G2. G2 Esports remains undefeated at this point with a 22-0 winning streak that began at the 2022 LEC spring playoffs. Evil Geniuses are the underdogs of this matchup, but have more or less held their own against other teams thus far. This game saw another match pause - a regular event now for EG matches, for whatever reason. It took less than 10 minutes for G2 to score four kills to EG’s zero here, making for a pretty bad start for the underdog team.

Despite that, however, EG managed to catch up by coming out on top of multiple successive teamfights, leaving both teams on equal ground in the midgame. EG then gained a lead by the 20-minute mark, with G2 seemingly unable to overtake them despite making a few smart plays during teamfights and objective skirmishes. G2 had stronger Legends, leading EG to play it safe - picking up three dragons and trying not to give up that lead. One series of AoE combos in a teamfight later however, G2 stole the lead back anyway.

By the midgame, it looked like EG had a really strong chance at taking a win here - but the team simply didn’t have enough damage or gold or over G2 to keep that lead going. G2 knows how to turn fights to their favour, and EG was just outclassed by the late game. G2 won this one.

Next: RNG versus PSG, two very strong teams with equal wins and losses at this point in the Rumble Stage. 12 minutes in, this was shaping up to be a very slow battle between two very evenly-matched foes. Neither team seemed willing to play very aggressively, and teamfights ended before they even began. RNG picked up the pace eventually, however, proving themselves to be the stronger team by absolutely dominating the late game with an over 10k gold lead. RNG wins.

Next up, T1 goes against SGB! After their 26-0 winning streak came to a heartbreaking end yesterday, T1 still managed to pick up a win against PSG. Here, the team was up against SGB - a team that only had two losses to show for its time in the Rumble Stage thus far. SGB had so much catching up to do, but T1 was always going to be a hard barrier to overcome - whether it was their first match of Day 2 or the last.

By the time the midgame rolled around, this was T1’s game. The team had a 4k gold lead with four kills over SGB, allowing them much more resources to bring into teamfights and objectives at such an early point in the game. The gap between both teams only widened as time went on, and T1 steamrolled SGB for the win here.

EG went up against PSG next. Both teams have suffered losses today, but this is their chance to climb up and out of the bottom rankings. This match was a slow burn - with neither side earning a single kill by the nine-minute mark, before EG snagged two kills and a slight gold lead to go with them. EG continued to dominate PSG in almost every teamfight after this, leading to a huge kill lead, more map control and much more gold to spend. With all of this success, EG practically sailed into the enemy base to score the win.

This next match was a spicy one, with two big teams recently getting their winning streaks cut down by G2: RNG and T1. Both, great teams, and clear favourites for the Knockout Stage. RNG bested T1 in teamfights and skirmishes, racking up more and more kills as the match went on. T1 managed to stay level with the other team in gold however, and downed more objectives - allowing them far more map control. At the half-hour mark, this game leaned in RNG’s favour with room for a big comeback from T1.

A Quadra Kill from RNG’s Gala saw the team push into T1’s base in spectacular fashion, proving that the team’s superiority at teamfights was more than enough to earn them the win.

Next, G2 versus SGB - an uneven match to end the day if there ever was one. G2 have been at the top of their game since MSI 2022 kicked off, while SGB have been struggling to stay afloat here in the Rumble Stage. G2 scored First Blood within the first three minutes, clearly coming in with a throw-caution-to-the-wind attitude. SGB responded in kind however, dismantling a teamfight with G2 to score a kill of their own. G2 did eventually get the kill lead back, but this was a great early showing from SGB.

Unfortunately, the team’s performance fell off hard. By the 20-minute mark, G2 had a commanding lead with 16 kills to SGB’s five, 8k more gold and three dragons in a row. SGB had no room to make good plays nor did they have the resources to outfight G2, and that spelled doom for them. In one of the shortest matches of the Rumble Stage, G2 dived into the SGB’s enemy base and won the game.

And that’s it for Day 2 of the Rumble Stage! G2 continues undefeated with four wins, and RNG comes in second with 3-1. At the bottom of the rankings are PSG Talon at 1-3 and SGB with a dire 0-4. Stay tuned for more of our coverage from Day 3 tomorrow.

Do you think G2 will continue to be undefeated tomorrow?