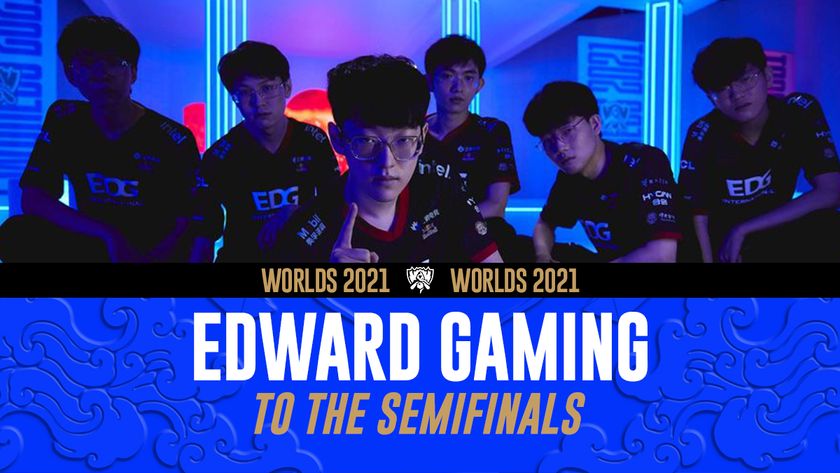 In our second quarterfinal match of the weekend, we saw two LPL titans in top form of RNG and EDG duke it out for a spot in the semifinals.

If anyone had told us that we'd get two inter-region quarterfinal matches in the space of two days, we'd say they were nuts. But as it turns out, that is exactly what happened. After T1 demolished Hanwha Life Esports yesterday, it's now time to check out what Royal Never Give Up and EDward Gaming have to offer. Both teams are two of the LPL's top teams so it'd be interesting to see how the matches will go.

Both teams have a storied history when it comes to their rivalry, dating back until 2017. However, it has always been RNG who has more often than not, come out on top. EDG did clinch the LPL Summer Split title while RNG got eliminated early but if their tournament record is anything to shout about, it's not a good idea to put your money against the Mid-Season Invitational 2021 winners.

RNG took charge of game one right from the start but still managed to give away first blood to EDG. More blood was split soon after with both teams trading kills to keep the scoreline even. The game was at a stalemate for most of the early game but it was RNG who got the advantage with two Drakes. EDG tried to gain control over the game with a quick kill on Ming but it proved disastrous as RNG responded by taking three kills of their own. While RNG had most of the mid-game on lockdown, it was EDG who came out on top heading into the late game.

Both teams ended up meeting in the river with a fight soon breaking out and it was EDG who struck first and ended up wiping out three in a matter of seconds. Xuan-jun "Flandre" Li also managed to shut down the fleeing Chen "Gala" Wei in style. It may have seemed that EDG managed to mount a comeback into the game, but it soon took a turn for the worse. After trying to get their first Drake, EDG instantly gets jumped by all five of RNG and end up losing four. This gave RNG the opening they needed to storm down the mid lane and end the game.

The second game of the series brought about some surprise picks, which includes Annie for Cheng-wei "Cryin" Yuan, who hasn't been picked at Worlds since 2015. However, things didn't start the way RNG was planning. After claiming the first blood, RNG gave away three kills soon after without any response. It soon went from bad to worse as RNG got caught out while trying to claim the rift herald. This gave EDG the opening they needed to wipe out four from their counterpart.

Unlike game one, EDG looked a lot more comfortable in the second game, taking out RNG with ease whilst outmanoeuvring them all over the map. Transitioning into the mid-game, EDG had a comfortable lead in terms of gold and experience, proving that they are here to play. But it wasn't long before RNG managed to finally impose themselves into the game, finding key pick-offs from EDG. But try as they might, EDG had too much of an advantage from the early game and soon enough, their slow siege on RNG's base was too much to handle.

For the second game in a row, EDG stuck with the Graves and Olaf pick seeing how much good it did them the last time. But RNG changed up their tactics this time and decided to focus their attention on the top lane for most of the early game. Both teams were at each other's throats constantly, trading blow for blow. Zhao "JieJie" Li-Jie managed to foil RNG's Baron attempt, stealing it from under their noses and giving his team the opening they needed to take a team fight.

EDG was on top form in game three, claiming four Drakes for themselves and managing to break RNG's bottom side base with ease. But somehow, they just could not close the game out just yet as RNG managed to find a response. They soon managed to find EDG out of position, slaying three but could not go for an objective with their base being pushed in. With RNG's backs against the wall, they soon went for a desperate Baron play, which ended up with Jiejie getting the steal once more. From there, all that was left was RNG's Nexus.

Going into game four, RNG knew that they needed to pull something out of the bag for this one. They ended up going with Cryin's Annie once more against Lee "Scout" Ye-Chan's Ryze again. GALA also got his hands on Aphelios once more and this gave RNG the tools they needed to succeed. Much like the last two games, it was EDG who took the lead in the early game. But this time, RNG were able to respond in kind, keeping up in terms of gold and experience.

But as we got into the mid-game portion of the match, it was RNG who soon took control of the game. They managed to kill off four from EDG in quick succession and took the first outer turret. From then on, it was RNG's game to lose as they had total map control. To add salt to the wound, RNG was able to keep EDG at bay for most of the game, keeping their kill score to just five. RNG took a calculative approach with game four, stretching EDG thin and wearing them out. The MSI 2021 victors soon marched down mid after taking the Baron and laid waste to EDG, forcing them to tap out.

Heading into the final game of the series, EDG started the draft by respect banning Annie. This put RNG in a tough spot and ended up picking Orianna instead whilst EDG went with the same Graves, Ryze, and Yuumi picks to go with Jarvan IV and Ezreal to round up the line-up. And of course, the game ends up working out in EDG's favour as they secured the first blood but RNG replied with two kills on the counterplay. Unfortunately for the LPL's third seed could not find any momentum in the game as EDG managed to cut off their early game rotations.

This gave the LPL Summer Split winners the chance to capitalise and they did so in style. After catching out both Shi Sen "Ming" Ming and Gala in the bottom lane, EDG managed to wipe out the other three of RNG with only 15 minutes into the game. With that team fight victory, EDG was securely in the driver's seat with nothing to stop them. This time, they kept RNG at arm's length for the entirety of the game, keeping them to only four kills to the bitter end.

And with that resounding defeat, we say goodbye to the MSI 2021 winners, who leave Worlds 2021 in the quarterfinals. While they were excellent in the first half of the year, they just couldn't seem to get it together when it mattered most. As for EDG, this will be their first-ever time in the quarterfinals where they will now wait for their opponents who will be playing on Monday.

DWG.KIA will face a rematch against MAD Lions from their previous encounter at MSI 2021 with the winner moving on to go up against T1. DWG has been the team to beat in the tournament and if there's any team that can pull off an upset, it's MAD. The LEC team have not been at their best but they are known to come up clutch when it matters. As for DWG, the reigning champions have it all to lose as they are the clear favourites in this 'David v Goliath' match-up.

Can EDward Gaming make history by going to the finals for the first time?