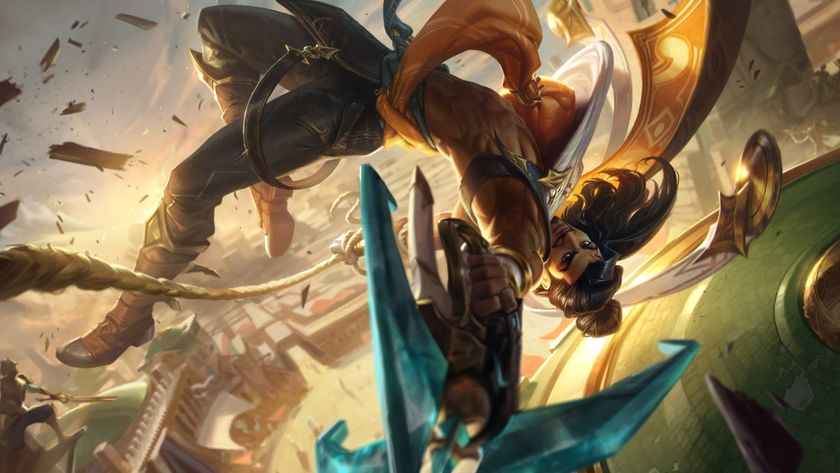 Akshan, the Rogue Sentinel is arriving on Wednesday, July 21.

Patch 11.15 is set to drop on July 21 and with it, Riot Games is introducing its latest champion: Akshan, the Rogue Sentinel. He will be part of the upcoming Sentinels of Light event, which is said to be Riot's first multigame event.

After teasing his arrival through various platforms, Akshan will finally get to showcase his entire arsenal in all its glory. Be prepared for his debut on the battlefield as he brings something different to the table; aside from being a mid-lane marksman, Akshan also has the ability to resurrect fallen allies.

That's right, but we'll get to that in a bit.

Akshan comes with a host of abilities that can dish out plenty of damage from the get-go. His first ability, Avengerang (Q) hurls a boomerang that deals physical damage while also revealing enemies it has hit, thus extending its range with each enemy it connects with. Enemies can be hit by the boomerang twice - once it goes out and when it returns.

His second ability, Going Rogue (W) is both an active and passive ability with two different uses. In its passive state, Akshan has the ability to mark an enemy champion as a 'Scoundrel' if they have killed one of his allies. When Akshan gets a takedown on a Scoundrel, he gains bonus gold but also revives his fallen ally, who will instantly resurrect back at base.

This will sure to cause some debate once it hits the press as this is the first time Riot Games has introduced this sort of ability to League of Legends. This will also change the way the game can be played once Akshan hits the Summoner's Rift as bringing an ally back to life right after his death can be crucial in swinging the fates of a team fight.

As for his active ability, Akshan goes full stealth mode for a short duration or indefinitely when near terrain. He can also see trails leading towards the Scoundrels and will gain bonus movement speed and mana regen while moving towards them.

Akshan also has the ability to swing around terrain, thanks to his Heroic Swing (E), which fires a hook shot onto the first terrain it hits. When latched, he can recast to swing around the terrain in its cast point while popping off physical damage shots at the nearest enemy. While swinging, he can recast once more to jump off in any direction of the cursor and let off one final shot. The cooldown for his swing resets when he gets a takedown on an enemy champion.

Rounding up the ability kit, we have Comeuppance (R) where Akshan locks onto an enemy champion and starts channelling power into his gun to store bullets. Once done or after recasting, Akshan unleashes a volley of bullets that deals physical damage based on the missing health to the first minion, structure, or champion hit. He can also move around freely or cast Heroic Swing while channelling and firing Comeuppance.

This all ties together with his passive ability, Dirty Fighting where every three normal attacks or damaging abilities deals a burst of physical damage. If the target was a champion, Akshan also gains a shield in the process. After attacking, he fires a second attack that deals reduced physical damage. It can be cancelled like a regular normal attack, which then grants Akshan a burst movement speed.

As if all that was not enough, you can soon use Akshan with his very own Cyber Pop custom skin. Be sure to get ready for when Patch 11.15 drops this July 21.

What do you think of Akshan?