For the European Open Division, Team Leftovers has shown a dominant performance, capturing five of seven cups so far and Bushido E-sports trailing just behind in the standings. This is the last chance for these final four teams to place and secure those last points for the best seeding.

Leftovers secure a balanced double tank comp while Schiesseisen elects for a double support Lunara carry comp heading into Towers of Doom. Leftovers win the first two team-fights, focusing down Schiesseisen’s tanks and making engaging near impossible for the Lunara carry comp. Schiesseisen tries to make use of the new Leoric but struggles against Li Ming and a dominant performance by Linked on Greymane, giving game 1 over to Leftovers.

For game 2, Leftovers drafts a strong double support comp around Gul’dan against Schiesseisen’s double tank isolation blow up comp, featuring Stitches and Chromie. Leftovers get the first two dragon knights but Schiesseisen pulls off their blow up mid game, chaining deaths for a full team wipe and evening out the score 17 to 17. Although Schiesseisen pushes their advantage into the late game, securing a handful of kills, they attempt a risky core call, giving Leftovers the chance to reverse wipe, putting Leftovers ahead 2 – 0.

Bushido currently sits as #2 seed versus Always Lucky as #6 but Rensen is replaced by Tiks2 for this series. 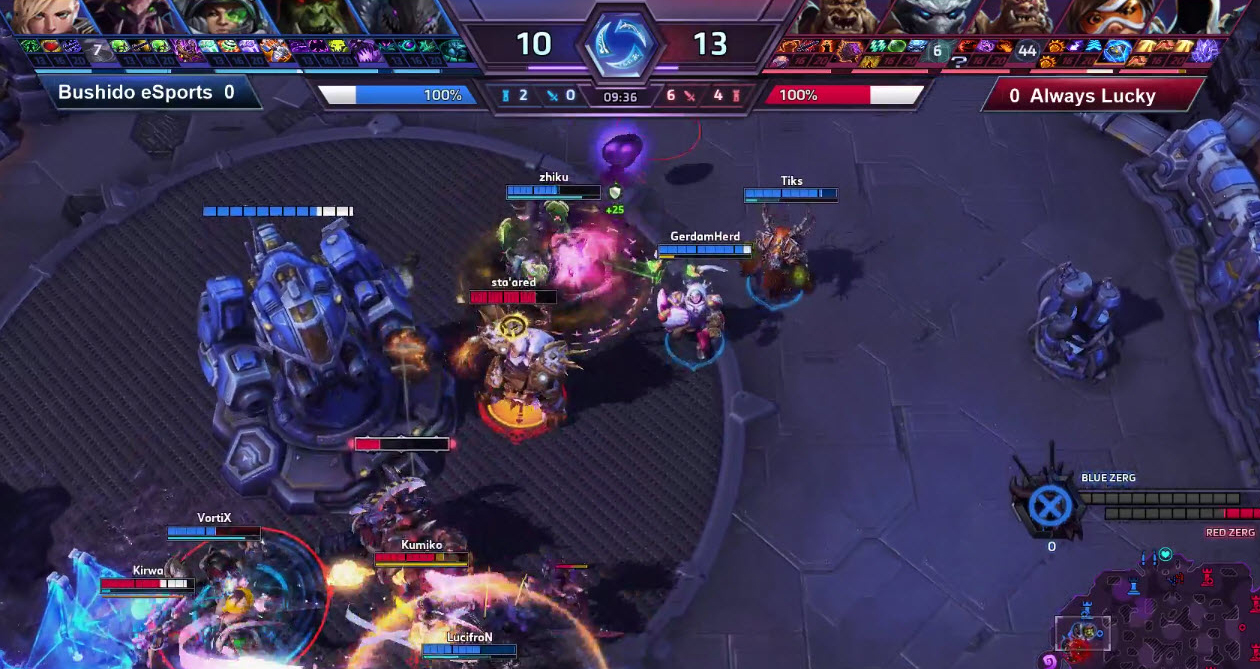 We get to see Morales on Bushido E-sports since her most recent rework but Always Lucky picks Auriel first and Cho’Gall second. For what seems like an easy draft win for Always Lucky, Bushido e-sports struggles to control either points against Cho’gall Auriel in one lane and Tracer Tassadar in the other, leading to Always Lucky securing a 100% Zerg wave at the 5-minute mark and a huge early game victory.

Heading into Towers of Doom, Bushido drafts a double support Zul’jin hyper carry comp while Always Lucky draft into an Abathur Ariel double support comp. Although Abathur manages to sneak a top shrine in the early game, Bushido e-sports' Leoric dominates the top map making room for the power of Bushido's double support Zul'jin comp to win them the mid and late game.

Always Lucky 1st picks Auriel, with Cho’Gall again but this time Bushido responds with some tools against the giant, drafting a double support touting Anub’arak stuns and Greymane's cursed bullet. Always Lucky secures early game gems with strong rotations from Cho’Gall but Bushido keeps him from ever turning in. Mid-game, Cho’Gall manages to get a turn-in after a successful team fight but Bushido does a great job countering. Unfortunately for Always Lucky, a late game Cho’Gall death secures Bushido the win and a spot in the finals. 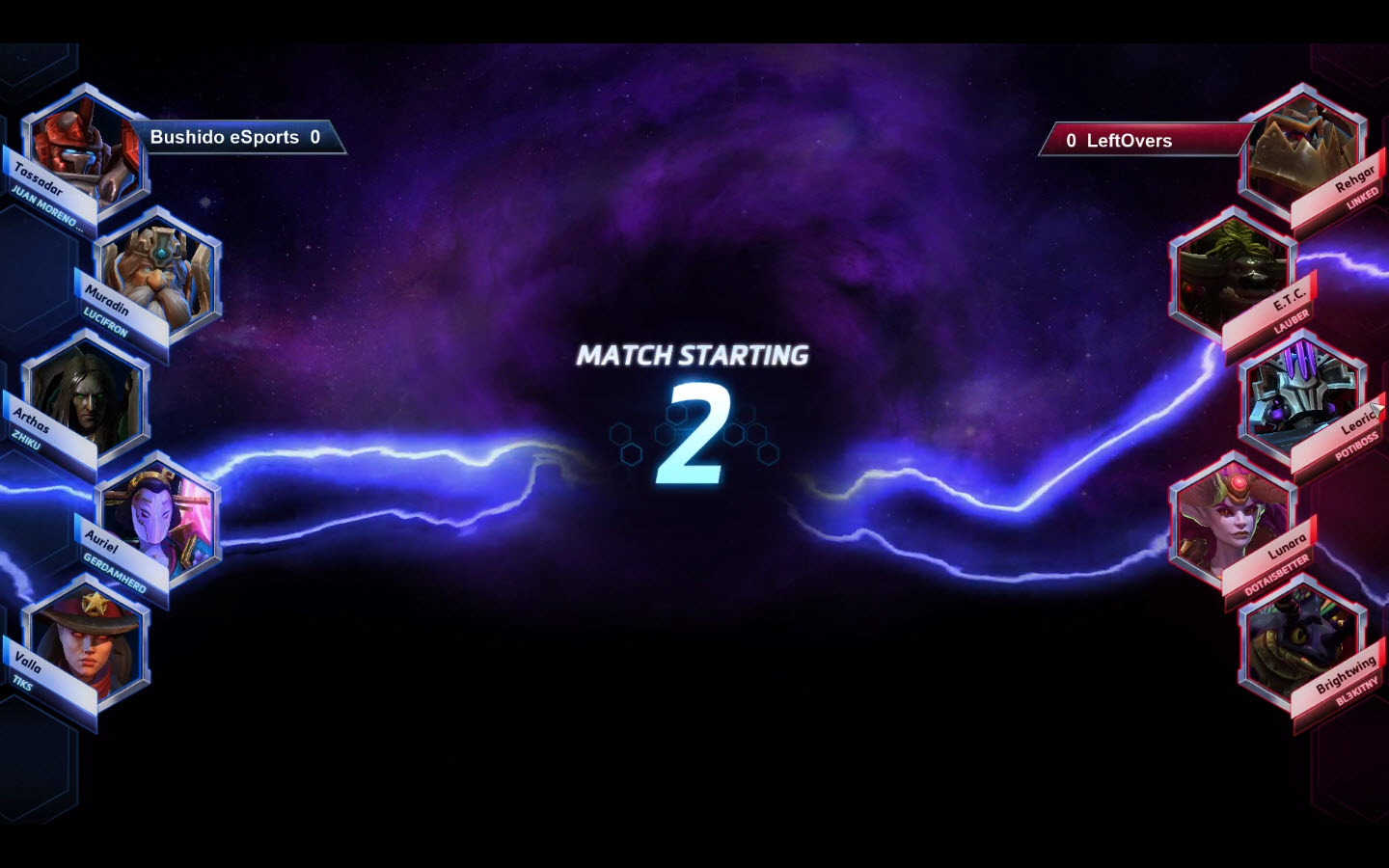 Heading into Cured Hollow, both teams mirror each other, opening with global bans of Dehaka and Abathur and building into double support comps, Bushido e-sports picking up Valla and Leftovers taking Lunara. Our teams mirror play, cheesing walls on opposite sides of the map with Bushido pulling head by taking a fort. Leftovers get denied their own boss mid-game but reverse and take Bushido’s boss. In the end, Leftovers take the win thanks to Lunara's poison putting her 20k ahead of Valla in damage and Brightwing's excellent boss control.

For Towers of Doom, Leftovers drafts their double support Guldan Auriel comp which pulls ahead early against Bushido’s double support Lunara Illidan comp, setting them ahead three kills to zero and securing an early level 10. Leftovers definitively control the mid-game with strong rotations and shrine control, Illidan seeming to hinder Bushido’s macro play by not going for Immolation. 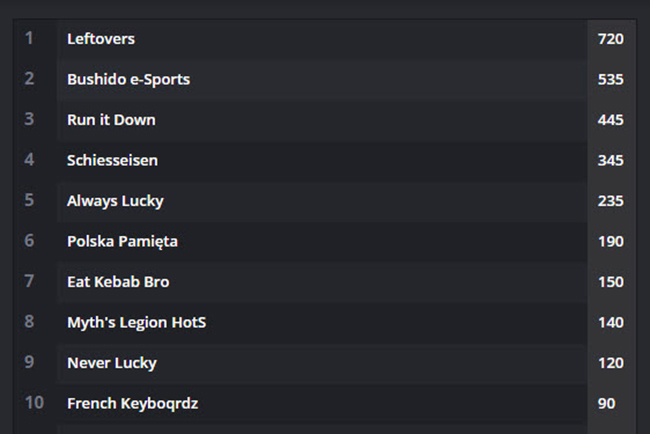 Bushido E-sports and Team Leftovers both look strong as we head into the Crucible. The only question left is, will EU see a new pro team usurp a coveted HGC pro division seat?

What do you think, will Leftovers be the next team to join the HGC pro league?