I have built Hearthstone budget decks for years and played budget decks to Legend in all the recent expansions.

In Scholomance Academy, I took budget decks a step further and reached the high Legend x11 star bonus playing nothing but budget decks.

In this post, I go through all the decks I have had success with. You can also find gameplay videos of all the decks on my Youtube channel, links to the specific videos are in the segments for each of the decks.

People often ask me what is the best budget deck. That can be a difficult question to answer because most of these decks do not have large enough sample sizes to give definitive answers.

I am more comfortable giving you the rough tiers the decks are in: the staples that are strong, reliable workhorses, the challengers that I have had good success with but that lack the hundreds of games needed to really understand them thoroughly, and the playable decks that I am able to win at least half of my games with, but that I would not readily recommend for climbing.

The large majority of budget decks I have played go in a fourth category, the failures. When building decks, you will end up playing more bad decks than good decks, but all of that is necessary to find the insights that allow the good decks to be built. I will not showcase the failures in their full form, although I may reference some of the lessons learned from them as appropriate.

With that introduction, let’s journey deeper into the best budget decks in Hearthstone in Scholomance Academy!

These decks are strong, proven, and I would be happy to take them to the ladder any day. 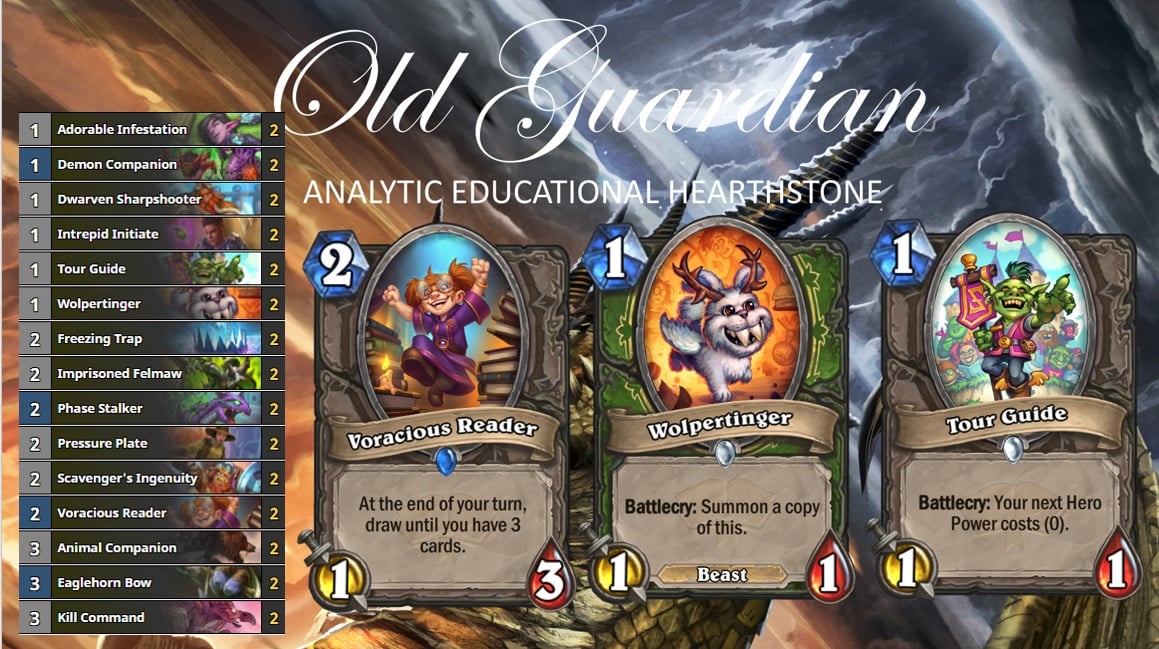 Face Hunter is once again one of the top tier archetypes in Scholomance Academy, and there is but a small difference in performance between the full-cost versions of the deck and the budget version. I have used this same budget list almost since the beginning of the expansion, and it just keeps delivering.

The secret package is always something you may want to tech for the meta you’re playing against, but double Freezing Trap and double Pressure Plate has been very reliable almost throughout Scholomance Academy. I occasionally replace one Pressure Plate with an Explosive Trap if I meet a lot of Rogues, but Rogues are not that common right now, so the basic package seems to be performing the best. 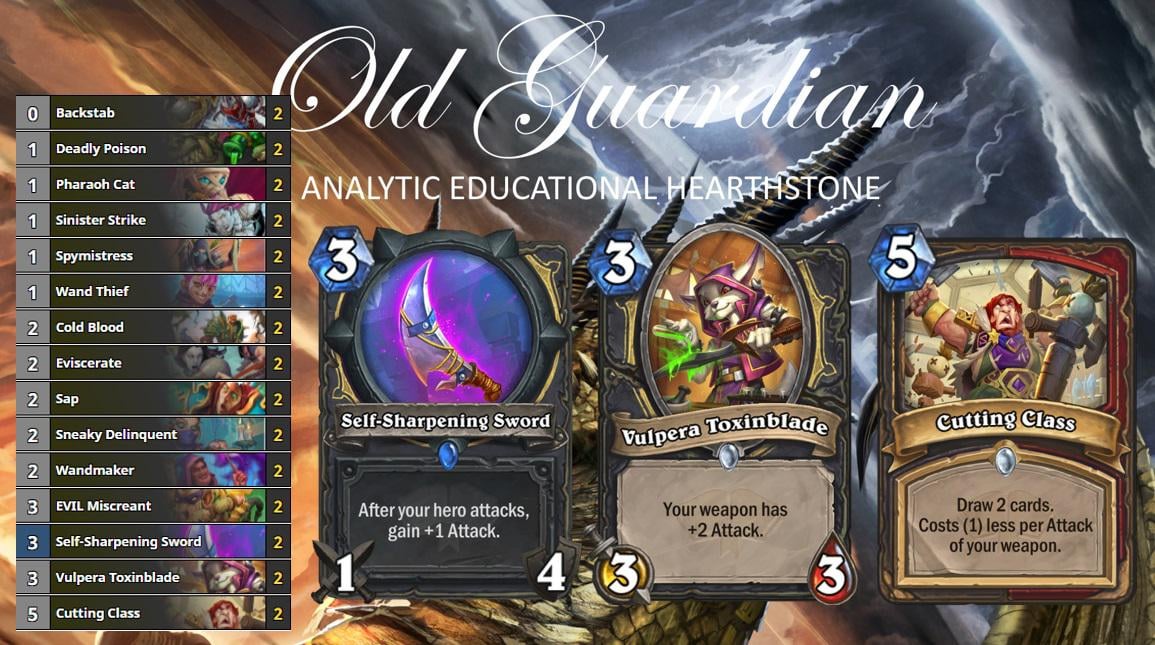 It took me almost a hundred games to find a good Budget Rogue deck. There are fairly cheap ways to build a good Rogue deck with Greyheart Sage and Secret Passage, that’s just four Epic cards, but I was convinced that there had to be a way to build one without them as well.

The Self-Sharpening Sword, Vulpera Toxinblade, and Cutting Class weapon synergy package proved itself early in the testing, but I kept running out of resources before I was able to finish the job. After a detour with Budget Galakrond Rogue (which turned out OK too, just not quite as good as this one), I was convinced that some additional resource generation would be the solution. It still took some fine-tuning, but the addition of Pharaoh Cat and EVIL Miscreant proved to be exactly the thing the deck needed to have enough resources to win the game.

Compared to the meta Rogue decks, the budget Aggro Rogue is an amalgamation of Stealth Rogue and Weapon Rogue: it cannot fully support either style but creates its own mix in between. Upgrading the deck would therefore mean making a choice to pursue one or the other. 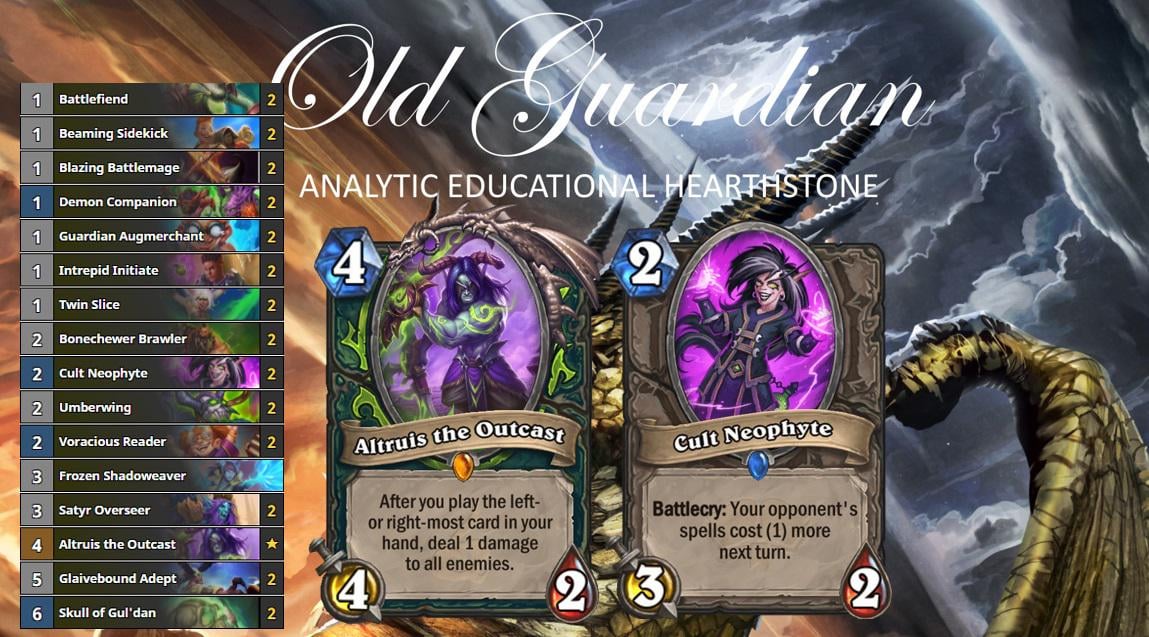 While Soul Demon Hunter is the more popular archetype right now, Aggro Demon Hunter is also still powerful. I have built several versions of the deck throughout Scholomance Academy, and this is my current favorite.

There are two fundamental ways to build the deck: either with Skull of Gul’dan and Altruis the Outcast, or without them but with Marrowslicer. The Skull variant has more swing and comeback potential whereas the Marrowslicer variant is even more aggressive.

I see a lot of people building the deck with both Skull and Marrowslicer, but in my testing already in August I found that solution unsatisfactory. Subsequent statistics of meta builds seem to indicate the same.

After making that fundamental choice, there are also some tech slots to fill. I currently like Cult Neophyte and Frozen Shadoweaver as my tech cards. Frozen Shadoweaver is usually better than weapon removal (Ooze) in a tempo deck because freezing the opponent for a turn is often as good or even better than removing a weapon, and Shadoweaver can also freeze big minions as needed. Cult Neophyte can serve to buy time against many of the current meta decks, such as Druid and Mage. You want your tech cards to be good in as many matchups as possible.

These are decks that I believe in, just not quite as much as in the absolute top decks. Some of them lack a good sample size, others are more dependent on hitting the right meta. Some of them might become staples in the future with more testing. 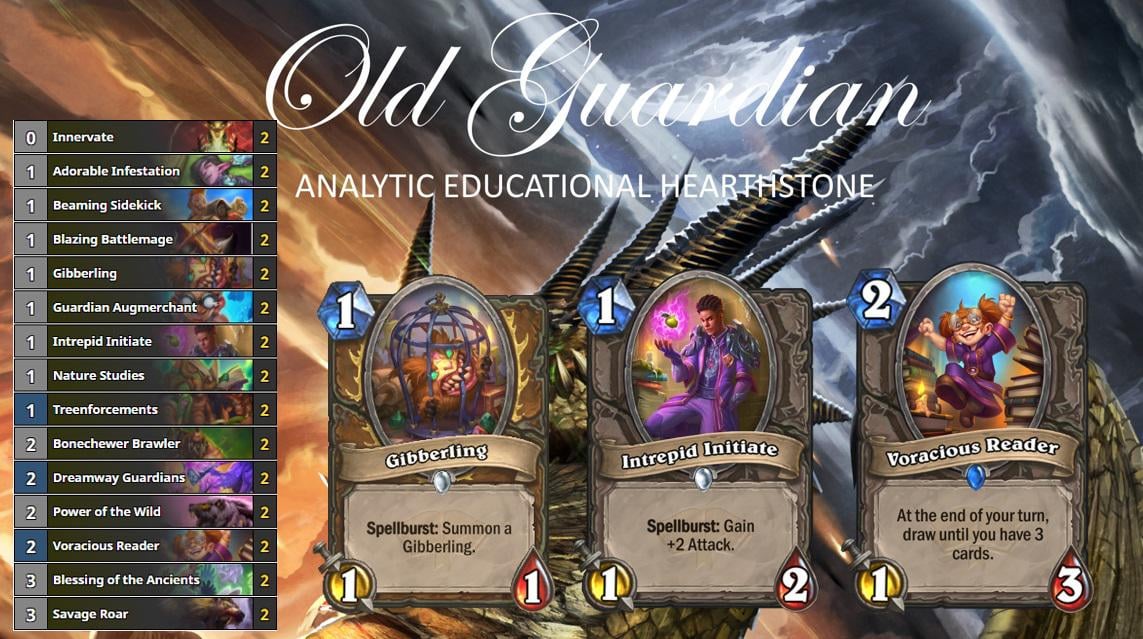 Early in Scholomance Academy, Gibberling Druid was perhaps even the best budget deck. Alas, the meta has evolved and Gibberling Druid has not proven to stand the test of time quite as well as Face Hunter. It is still a formidable deck, clocking in an above 51% winrate in Diamond even today, but it is no longer a fully reliable climbing deck in higher ranks. 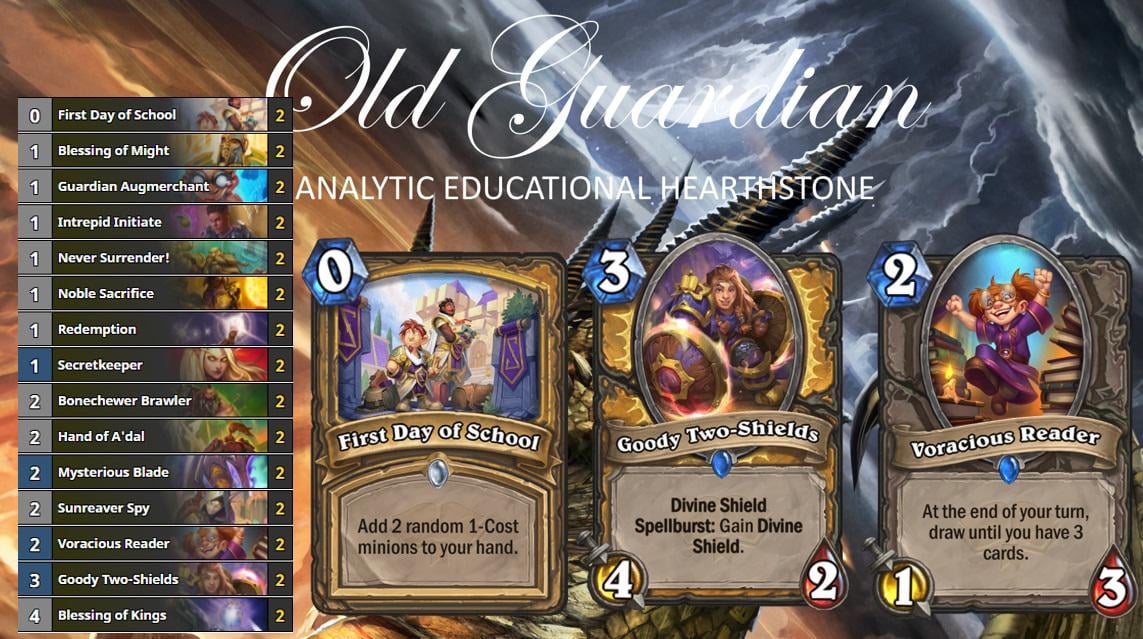 Paladin is one of the big winners in Scholomance Academy, but a good budget Paladin deck proved to be elusive. Libram of Hope, High Abbess Alura, Lady Liadrin, and Argent Braggart are such key cards in many of the current Paladin decks that it can be hard to see how they can be replaced.

Ultimately, I found the answer in Secrets. Secretkeeper, Mysterious Blade, and Sunreaver Spy are still perfectly viable cards, they are just slightly too weak compared to the current main Paladin archetypes, but they can still come together for some unexpected results.

This is the deck I finished my Legend climb with in September. 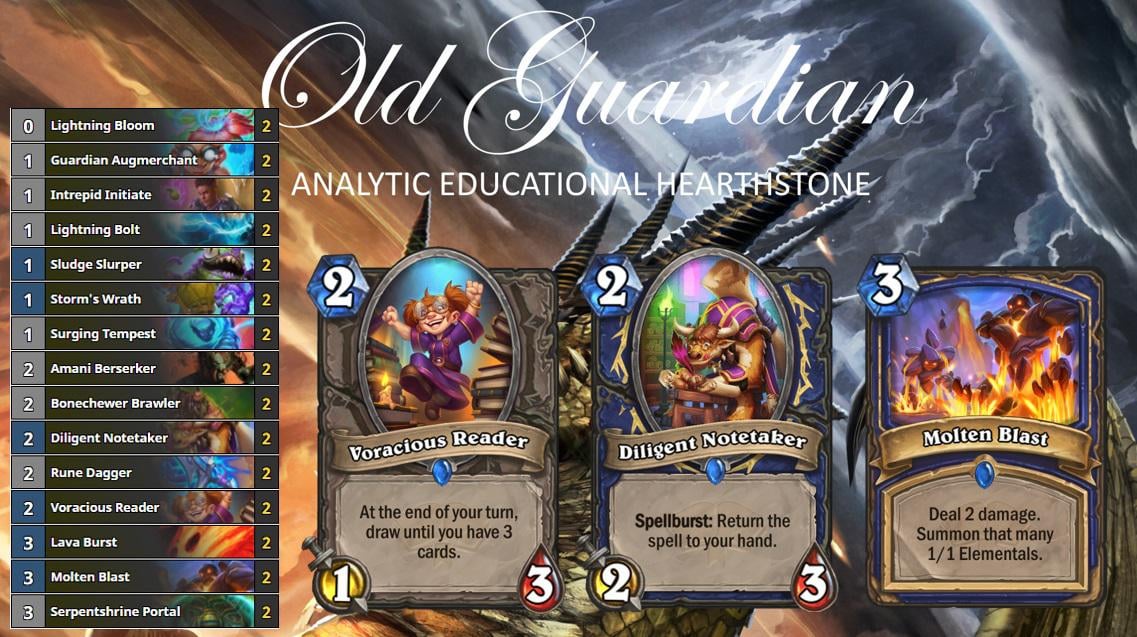 I think Burn Shaman is underrated and I believe the reason is that most people build the deck with the wrong strategy in mind. Sorcerous Substitute, for example, is a trap card that is not able to succeed in an archetype the can fight for the board for a limited time only after which it has to switch to direct damage spells to finish the job.

The way I believe Burn Shaman should be built is to keep the curve very low and aggressive to maximize early minion pressure and then finish the job with spells. Expensive minions are a waste of space with that strategy in mind.

Recently, there have been some individual full-cost Burn Shaman decks that have adopted this philosophy and I have a lot of faith in the archetype should it be more widely adopted. I built this deck in early August and retested it in September to find it working even better in the current meta. 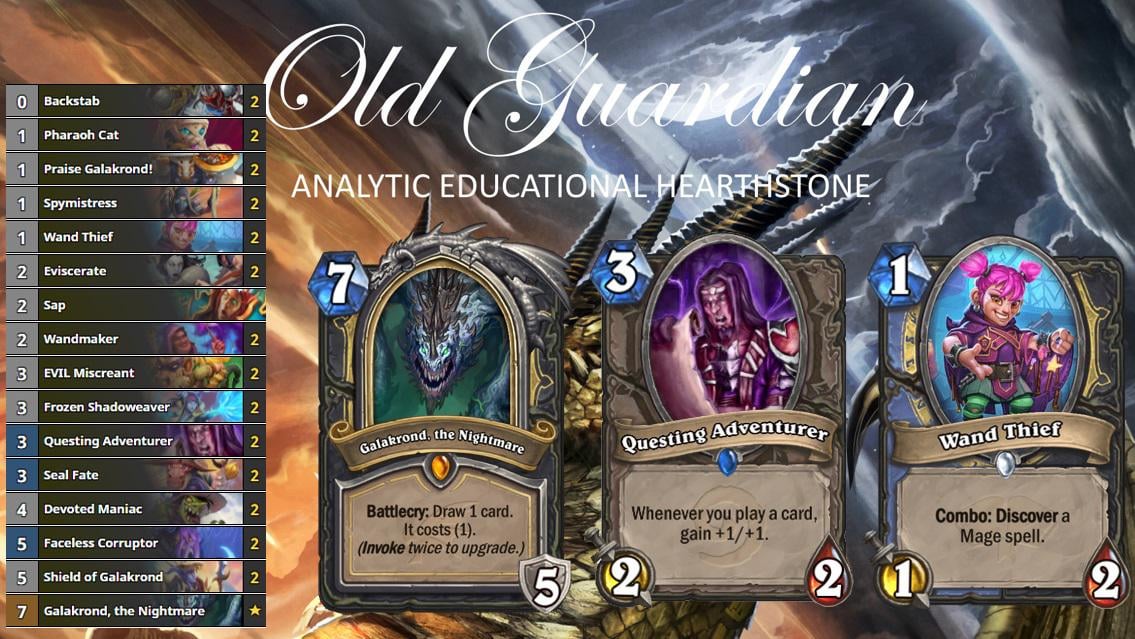 It is a fun deck to play, although the pure aggro approach seems somewhat better. It is often a good idea to just win the game as fast as you can.

During my experimentation, I came across some archetypes that can win enough games to slowly climb, but that I cannot seem to make good enough to really roll through the ladder. 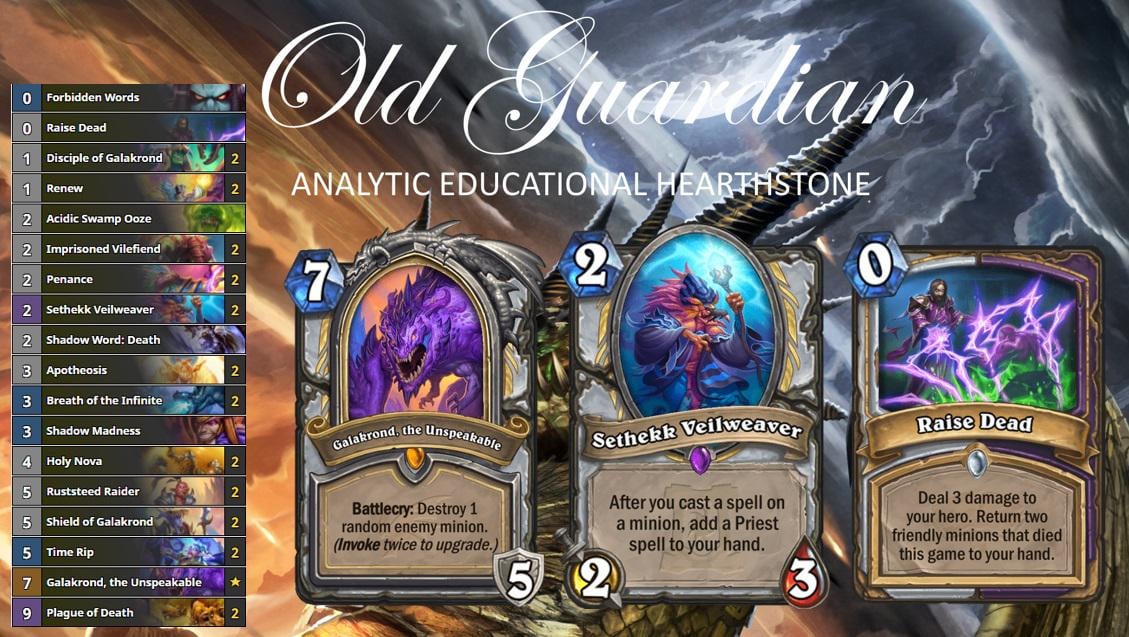 I really wanted to build a budget control deck. I realize that it is a difficult task because Hearthstone is monetized so that control and combo decks are expensive. I tried several ideas, such as Big Warrior (does not work on a budget by the way), but the only class that had what it takes is Priest.

It still requires four Epic cards to work: two copies of Sethekk Veilweaver (for value) and two copies of Plague of Death (for hard removal). 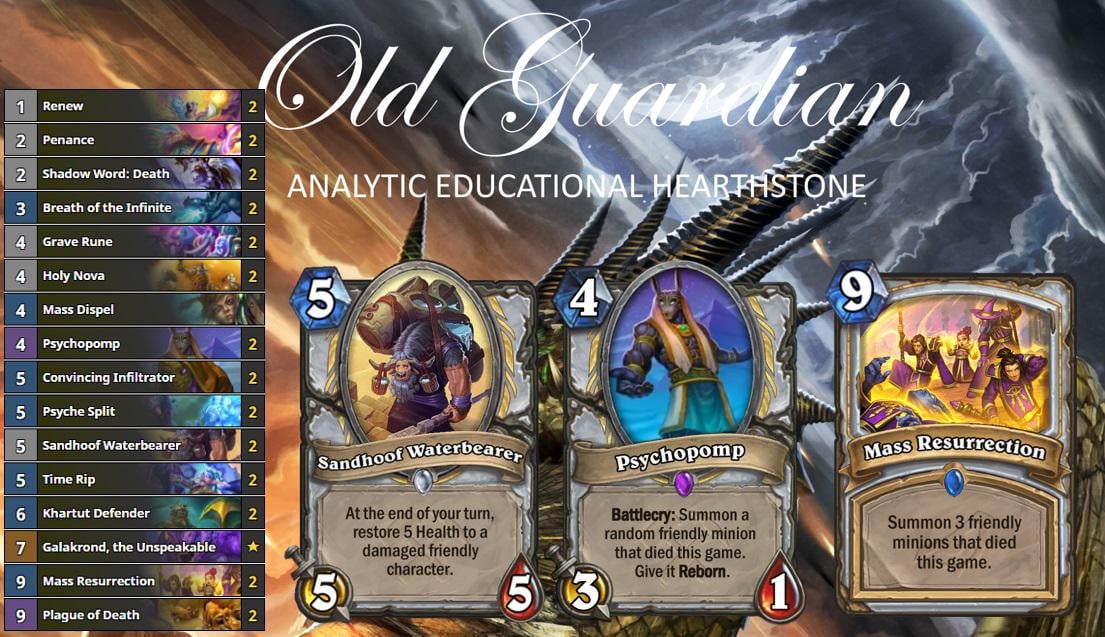 I also tried another Priest variant, Resurrect Priest. When building Resurrect Priest on a budget, you lack some of the value from Archmage Vargoth and Catrina Muerte, and the best way to overcome that is to add Galakrond to the deck.

I had moderate success with the deck and it seems playable, but not particularly strong.

What about other classes?

I actually had some success playing my old Ashes of Outland Galakrond Zoo Warlock, but I’m still uncertain what would be the best way to build a budget Warlock deck in Scholomance Academy. I believe there is one if the right list can be found.

Warrior decks are typically expensive and I am skeptical about Pirate Warrior without Ancharrr. I tried Big Warrior, but could not make it work on a budget.

A cheap Mage deck seems impossible with so many key cards being Epic or Legendary.

Scholomance Academy turned out to be an OK expansion for budget players. Voracious Reader alone provides multiple viable decks, which can be a good thing but also makes many of the decks play in a similar fashion. The meta is aggressive and swingy, and aggression works on a budget too.

This article was originally posted on my blog at http://www.kilkku.com/oldguardian/2020/09/best-hearthstone-budget-decks-in-scholomance-academy/