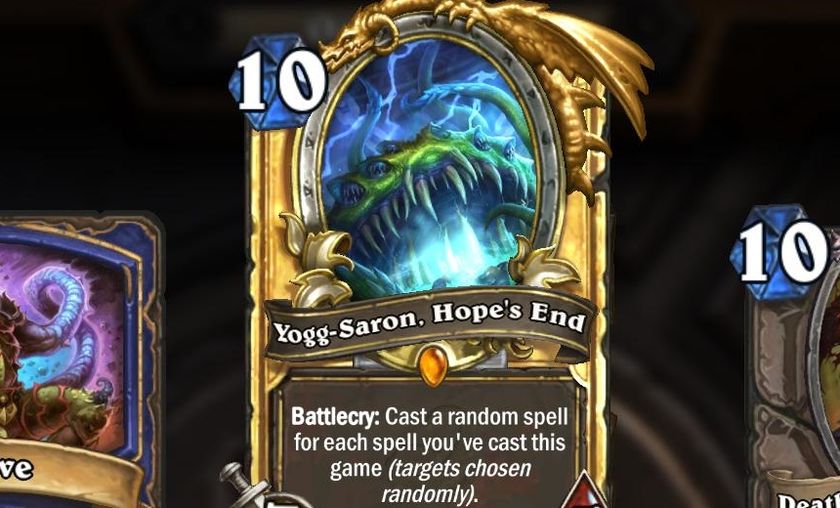 First impressions of the Standard meta

We have a look at some decks which have proven successful in the fresh meta while we admire some insane pulls.

We may only be a couple of days into the Standard meta, but there are already certain deck archetypes that have started to emerge as possible tier one choices. As with every expansion, RNG has played a part in ensuring some people have been blessed with powerful options from day one, while others are still searching for the right combinations. In this article, we take a look at the early contenders for best picks in Standard, and get a little green about some of the craziest pulls we’ve seen so far. 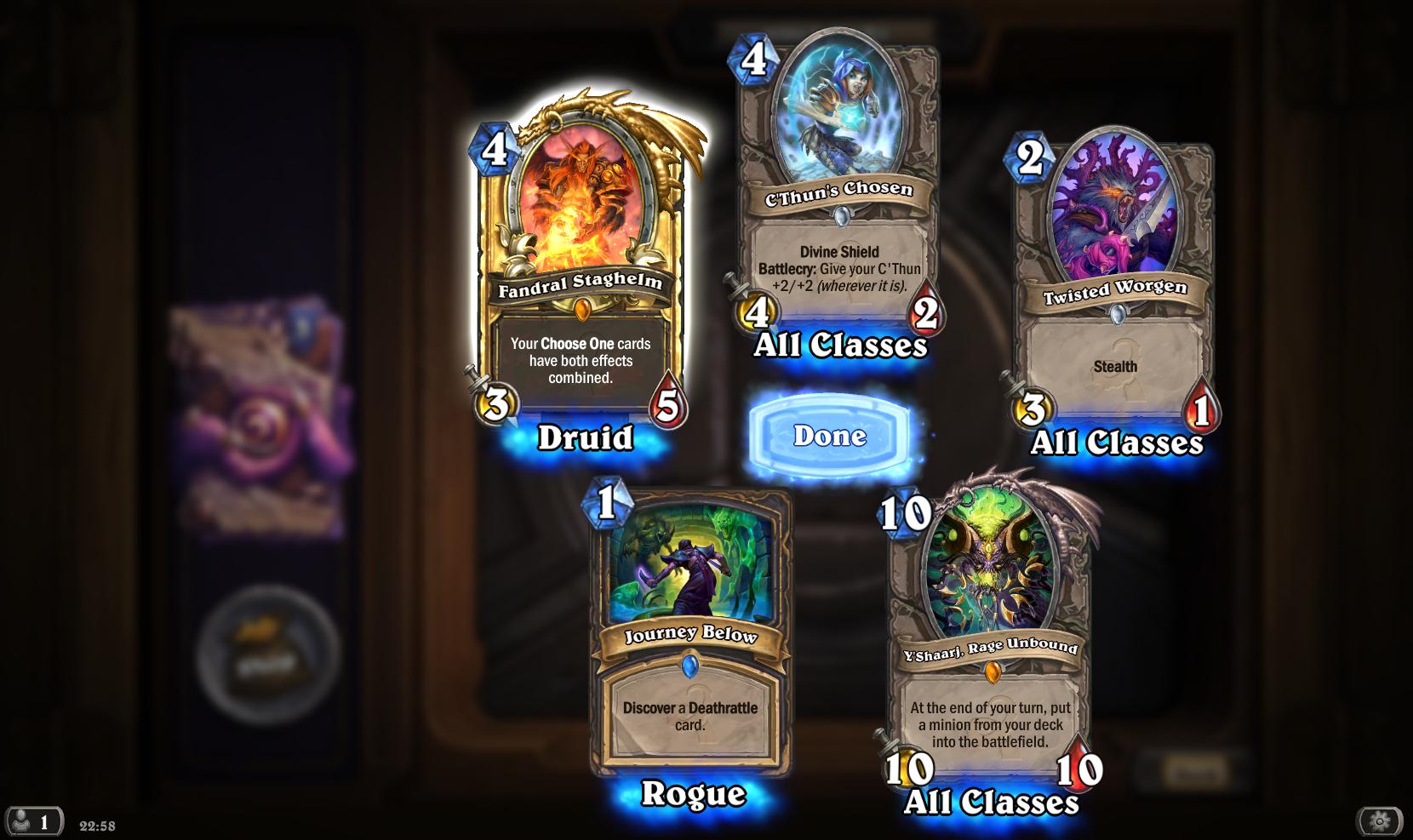 Druid has certainly bounced back from losing the [card]Force of Nature[/card] combo, as the many different archetypes currently being played on the ladder can attest to. Be it C'thun or more midrangey Beast Druid, one thing they do have in common is the new legendary, [card]Fandral Staghelm[/card], who helps them extract value from the many Choose One cards Druids love to play. 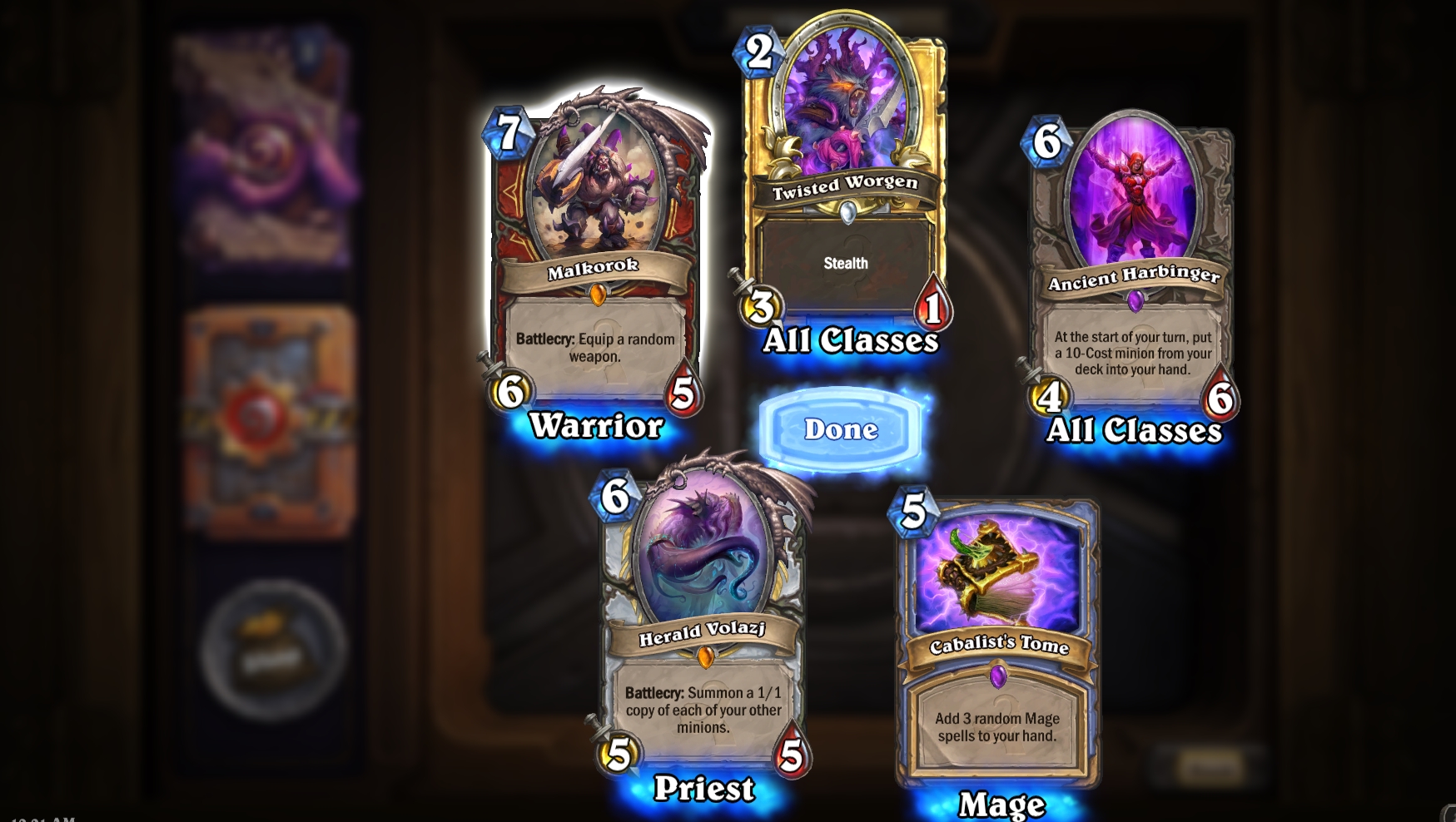 Tempo Mage has been making a comeback, which some necessary alterations of course. Since Mad Scientist has left the meta, so have the secrets played in the deck, and other cards such as [card]Cabalist's Tome[/card] and of course Yogg-Saron, Hope's End have filled the void. A bit of randomness has always been a part of the deck and the Old God certainly makes for a flashy finisher, albeit not always in the player's favor. 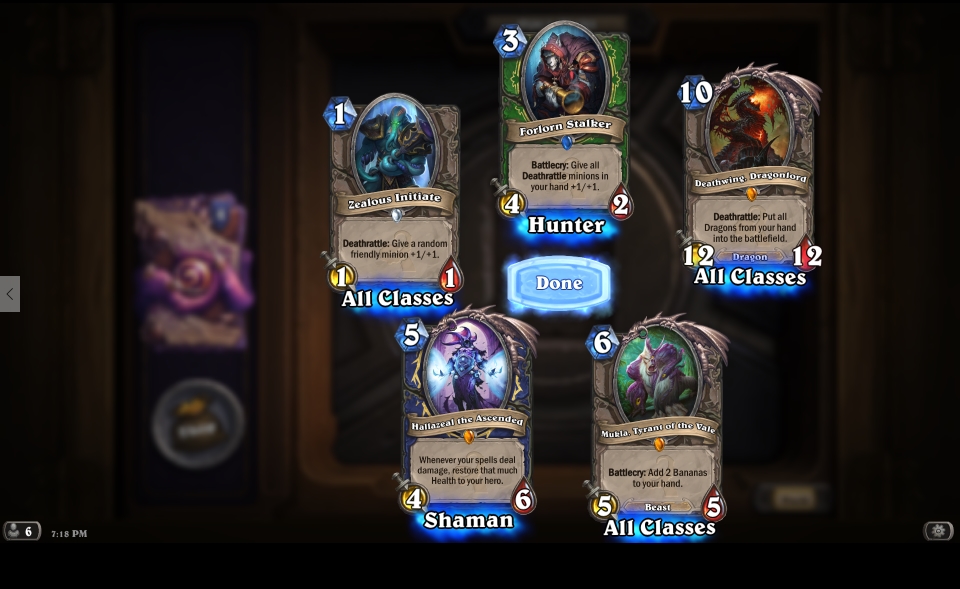 In an unstable meta, flexible decks reign supreme and thus it can't surprise anyone that with new cards such as [card]Possessed Villager[/card] and [card]Forbidden Ritual[/card], Zoo has proven itself useful once more. While the deck doesn't run any of the new legendaries, we can still use it as an excuse to show off this insane three-legendary pull someone got and remind ourselves that Dragon Paladin is still out there, waiting to be optimized. 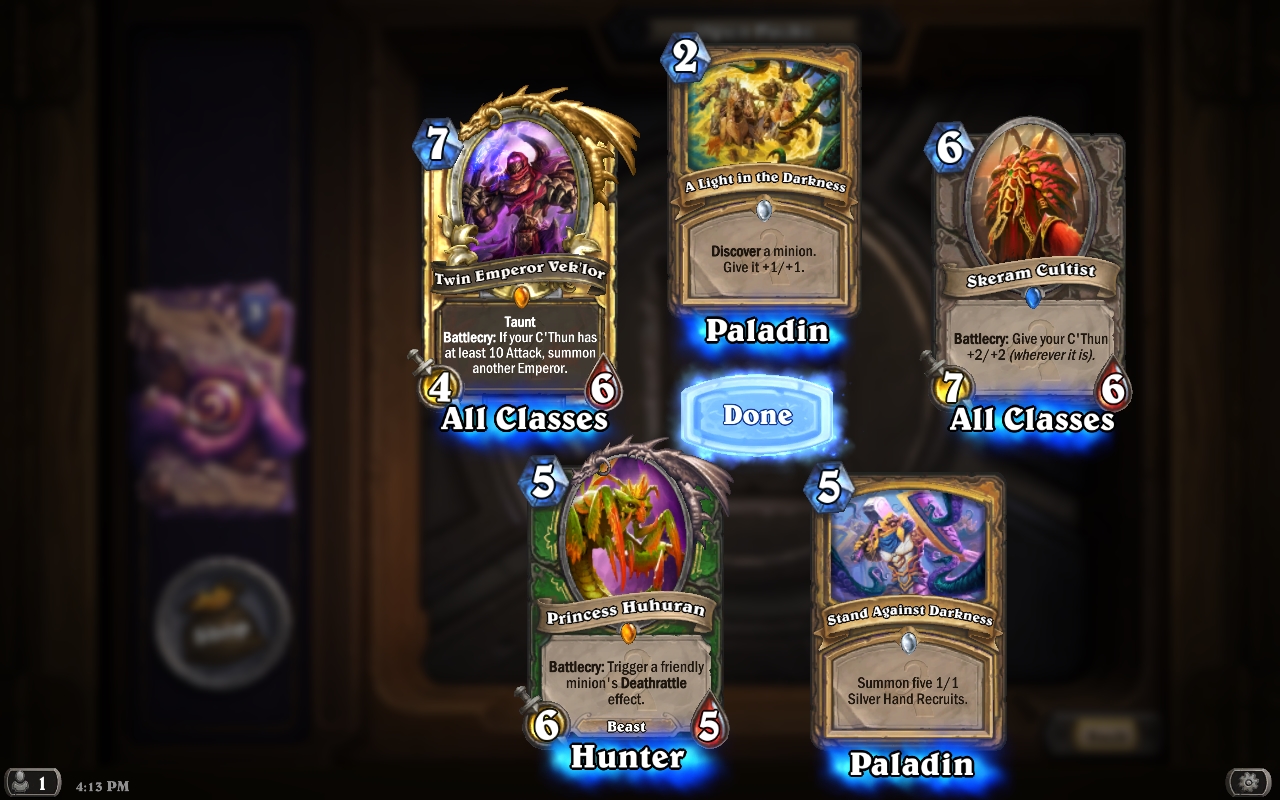 Of the many different C'thun archetypes out there, Warrior has been one of the strongest, primarily due to their ablity to draw out the game until they finally get to play their win condition. [card]Twin Emperor Vek'lor[/card] helps by providing (typically) two beefy taunts on the way to the Old God, and pairing him with [card]Brann Bronzebeard[/card] can win games outright. While the loss of [card]Death's Bite[/card] is certainly felt, Warriors are still looking good in the meta with this deck. 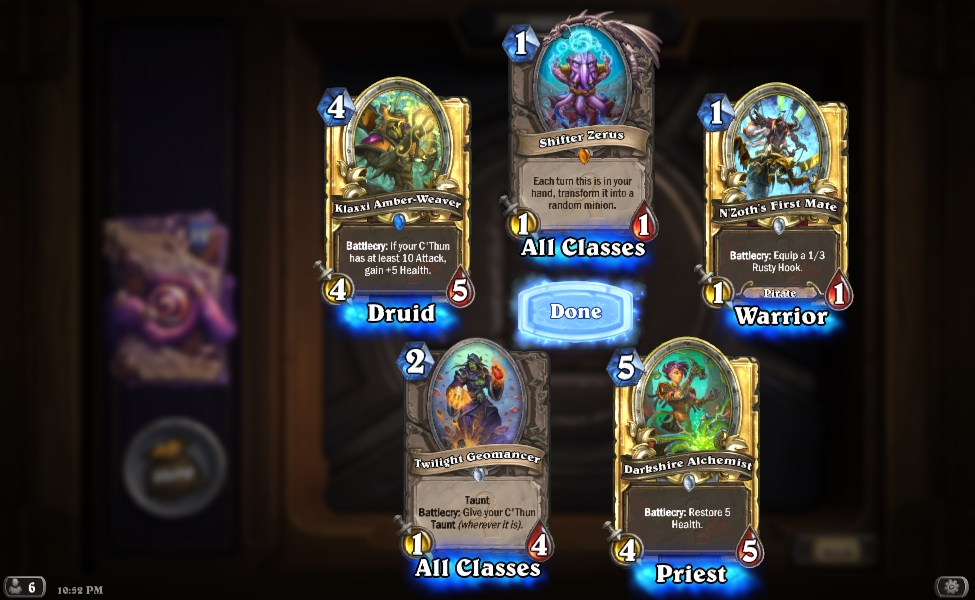 Speaking of Warriors, it seems the impossible has finally happened: there is a meta-viable Pirate deck! Pirate Warrior trades some control for face damage and does so with both style and entertainment value. Smashing people's faces has never been more fun, and the author of these lines deeply regrets having dusted his golden Skycap'n Kragg back at the TGT launch. 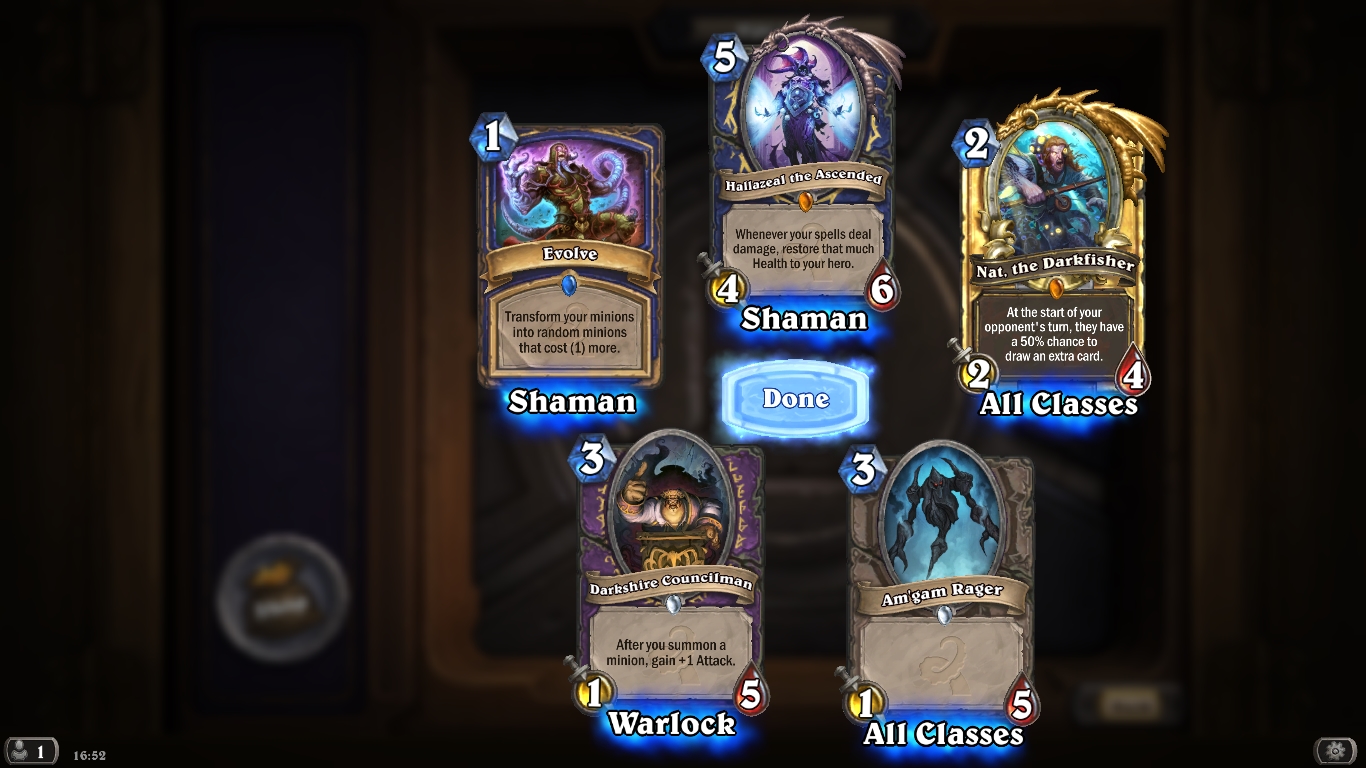 Midrange Shaman was the most popular deck among our readers in our prediction of the new meta, and it's been both popular and powerful in the first two days of the new ladder as well. While [card]Hallazeal the Ascended[/card] (pictured above, along with his golden friend) doesn't make for a necessary addition to the deck, value generators such as [card]Evolve[/card] and [card]Master of Evolution[/card] have become staples of the archetype, now aptly nicknamed "Darwin Shaman." 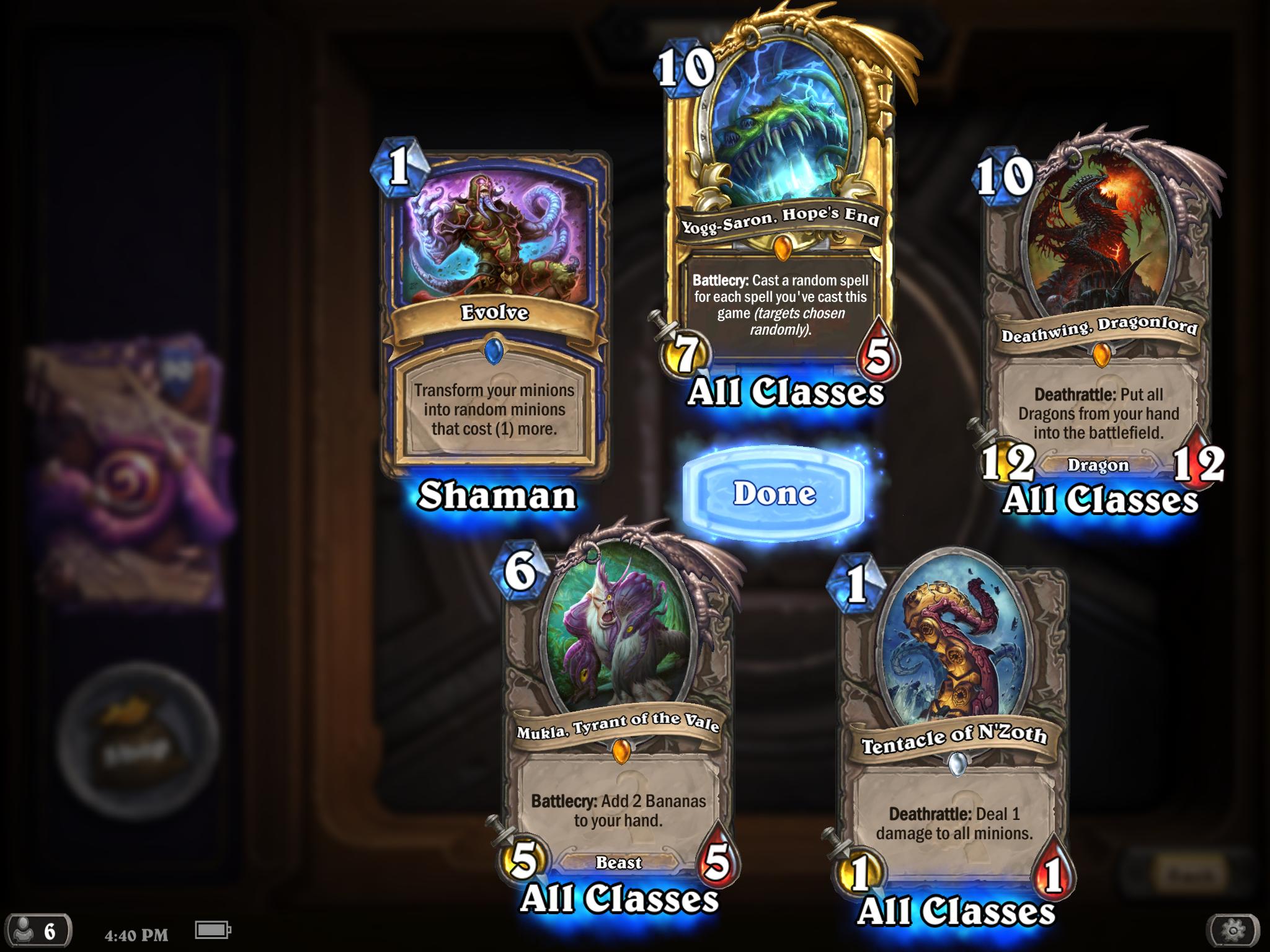 Despite being pronounced dead by many after the nerf to [card]Blade Flurry[/card] (and, to a lesser extent, to [card]Master of Disguise[/card]), Rogue has made its way back into the meta with not one but two different archetypes. The first one is the Yogg Rogue, whose gameplan is to play as many spells as possible and finish off the opponent with a (quite spectacular) Yogg-Saron, Hope's End explosion. As with Tempo Mage, the Old God is notoriously finnicky to play, but then again, Rogues are not known for playing by the rules. 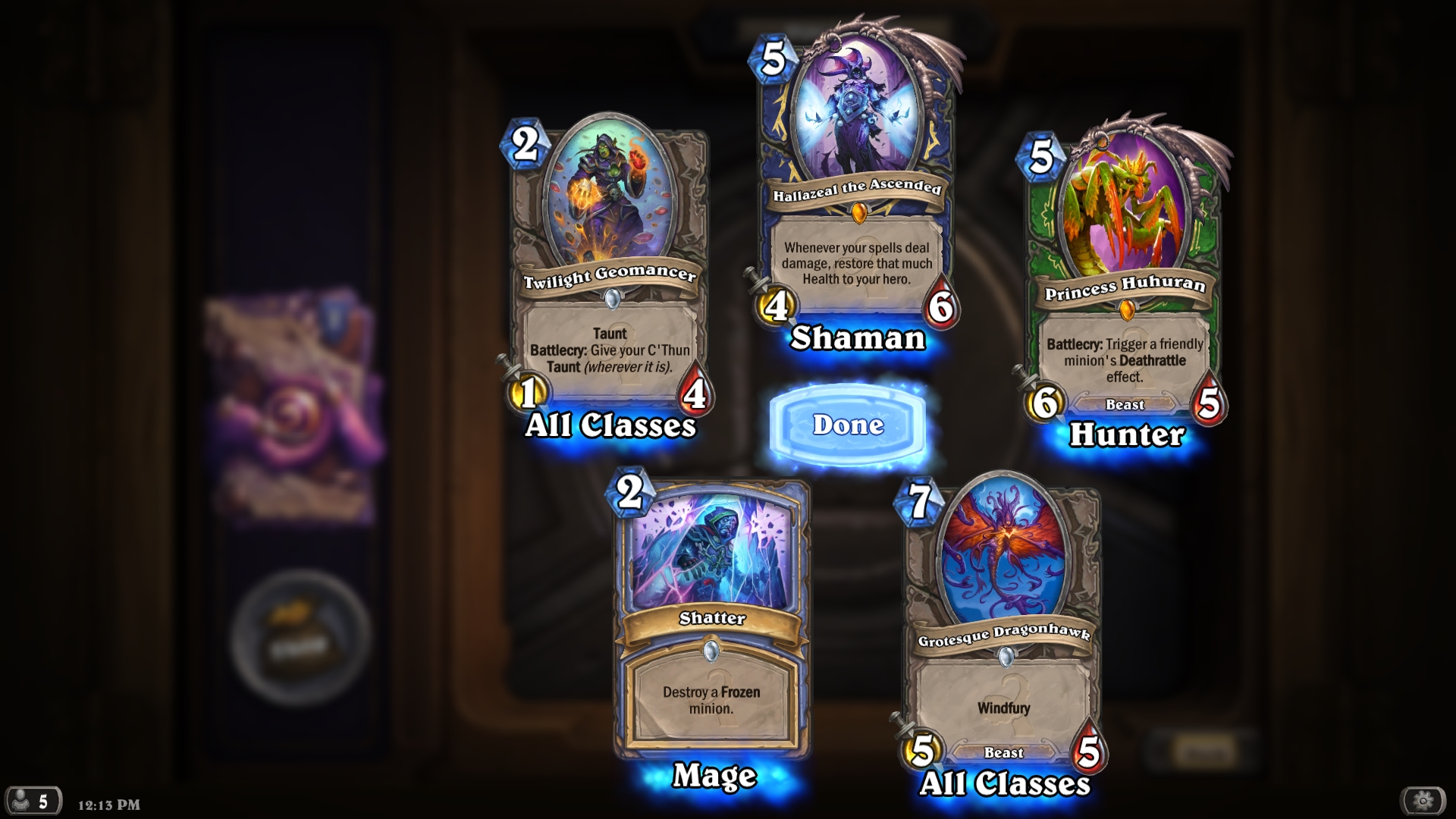 Apart from Yogg-Saron builds, Miracle Rogue, ruler of the Classic meta, has been making a comeback as well, its gameplan revolving around going for aggressive face damage and using Xaril's spells for deck cycling and utility alike. It's still too early to comment on its long-term viability, but seeing a [card]Gadgetzan Auctioneer[/card] pull six cards in a single turn does bring back some rather unpleasant memories. 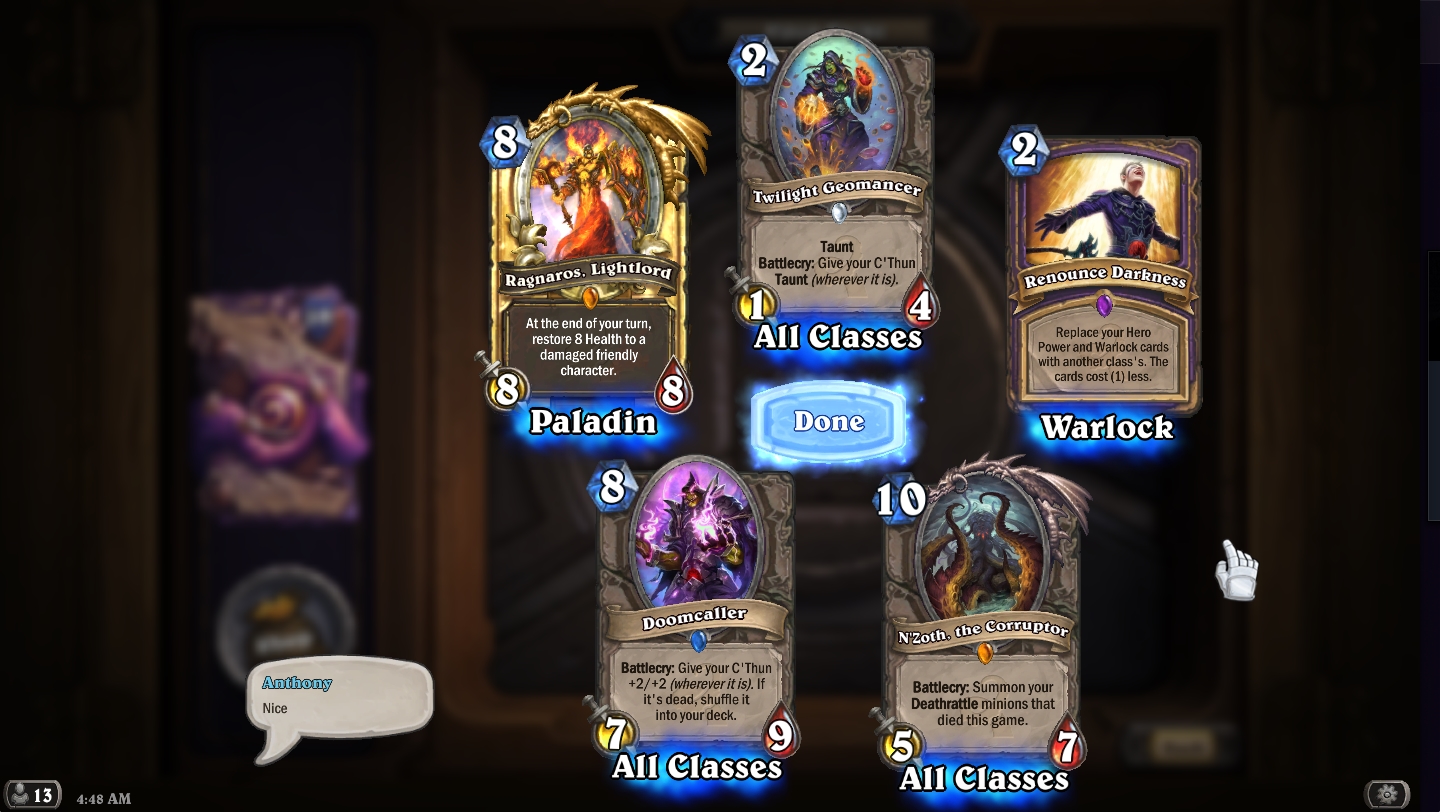 "Live, Insect!" - Ragnaros, Lightlord has helped Control Paladin immensely and become an insant addition to the Control archetype, which was already favored by some over the Aggro or Secret builds before the Old Gods release. The rehabilitated raid boss provides the deck with marvelous longevity, allowing for favorable trading as well as drawing out the game by outhealing face damage. 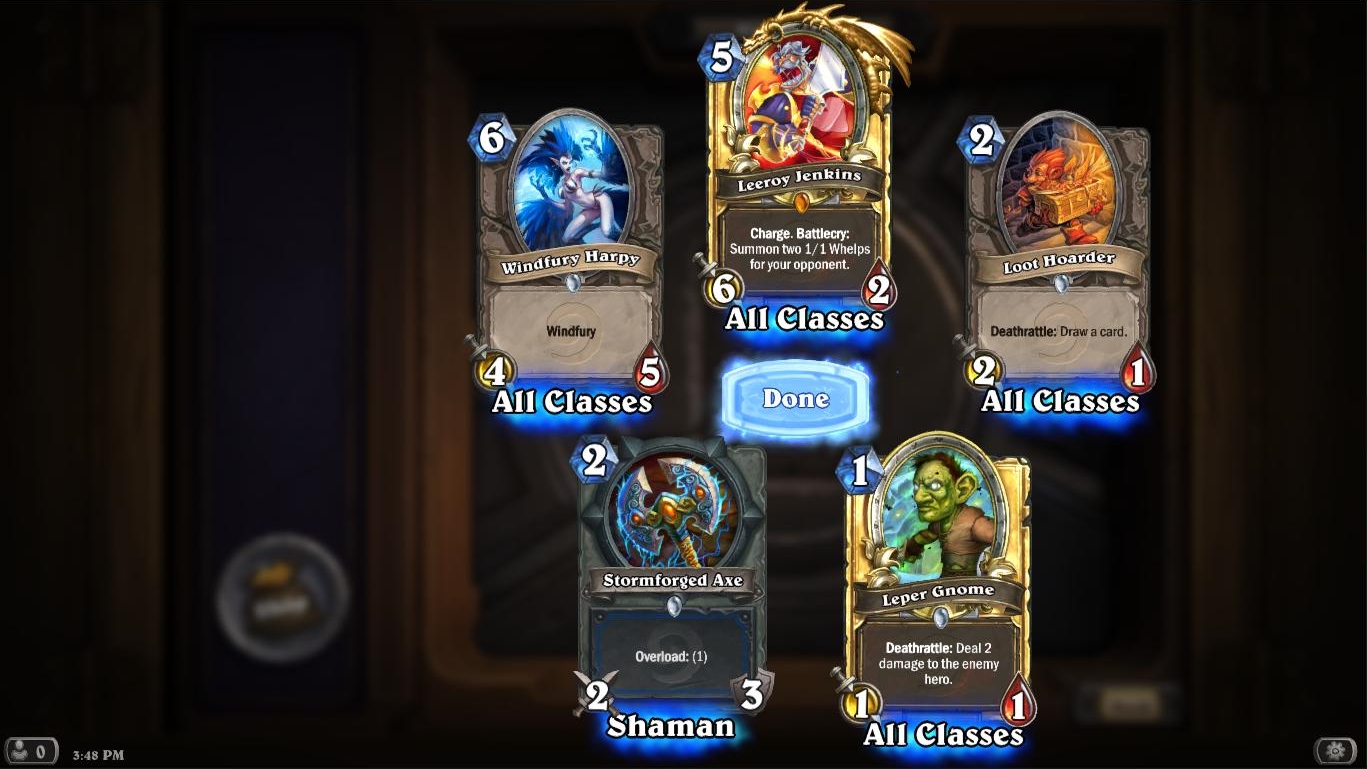 Some things never change, and if there is one constant in Hearthstone, it's that Hunters will always go face. Consequently, Face Hunter still works in the new meta, possibly better than it did before the release of Whispers of the Old Gods. Sure, [card]Call of the Wild[/card] is a nice addition to the Hunter arsenal, but why bother when you could just slot in [card]Leeroy Jenkins[/card] (again) and smash your opponent's portait by turn six (again)? To celebrate this fact, we found someone who managed to pull a golden Leeroy just yesterday, certainly thrilled that he can finally reach the higher accolades of BM.

Obviously there is a lot still to be explored and discovered in Standard, but we feel like these are a great starting point for anyone wanting to dominate from day one. If you’ve got any sleeper combinations you think are potential game-changers, let us know, and the same goes for the best (or worst) pulls you’ve seen since the expansion dropped.