Heroes of Cards #3 is over! Interview with winner ek0p and match reports.

"Zoolock is rightfully so, the best deck in the current meta game." 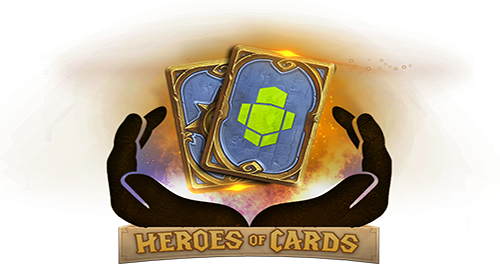 The first match of the grand finals was a definitive display of Zoolocks power. In what was described by casters as "The most disgusting board I have ever seen" ek0p started the game with two Haunted Creepers, two nerubian eggs, and a Harvest golem, all by turn 5. Powder tried to remove the board efficiently, but when every minion you kill spawns another minion, it can seem a little hopeless. In turn, ek0p supported his minions with multiple Defenders of Argus and Powder could only concede facing down a full board compared to his nothing. Game 1 goes to ek0p.

Hunter was a good choice to go against Zoolock, but Powder still couldn't seem to catch a break with draws. What looked like an even game early on through matching Under Takers, quickly spiraled out of control for Powder and ek0p's Zoolock deck continued do exactly what it was destined to do: play sticky minions at a break-neck speed. Powder needed to get more out of his cards, and not even the value from an Eaglehorn Bow could stop the Zoolock train roll. Game 2 goes to ek0p.

Ekop has now won 9 games with his Zoolock deck in this tournament. Powder, deciding to fight fire with fire, throws his own Zoolock into the ring, and thanks to a very fortunate series of Knife Juggles, was able to get the upper hand throughout the middle portion of the game. From there on, Powder was always two minions ahead of ek0p, who finally had a taste of his own medicine. Poweder takes
game 3.

Without a doubt Zoolocks worst matchup is against the tried and true Priest, and this was much more evident than when Powder was playing Priest in game 1. Death Cultist was a work horse during the early phase of the game and Ek0p had the Holy Nova at the perfect time, and by turn 9 ek0p had 29 hp with a Sludge Belcher on the board, against Powder's empty board and 0 cards in hand. Needless to say, Poweder conceded and ek0p takes game 4.

Powder had a little bit of momentum from last game and his draws seemed to capitalize on that as well. Drawing three ramp cards in his opening 4 turns allowed powder to force out a turn 3 Spectral. This minion alone went on to do over 16 damage and consistently gave him control of the board. After that, Powder played an Azure drake, powering up the two swipes he had drawn to kill any minions ek0p might have had left. ek0p's lucky was catching up with him, as a set of medicore draws was simply no match for the perfect curve Powder presented. Powder takes game 5.

Both players started the game with innervate in hand, but how they used it differed. ek0p powered out his own Spectral knight , while Powder rushed out an Cairne Bloodhoof. Ekop had the silence in hand with Keeper of the Grove, and when the minions traded and the swipes were drawn, both players came up dead even on turn 6. With both players having 0 board and only 3 cards in hand, every minion mattered. Ek0p looked to have the advantage having drawn an Ancient of Lore, but it was a consistent stream of Chillwind Yeti's and Azure Drakes that allowed Powder to make a fantastic play. Despite not having the 16 damage combo in hand, Powder attacked face, ignoring minions he could of otherwise traded with. This caused powder to use the one Force of Nature he did have to deal exactly lethal damage and win the game.

Interestingly enough, this was the first time Ek0p had to play his Warrior deck throughout the entire tournament, and against druid, it fairs pretty well. Though an early Fiery War Axe is generally ineffective against Druid, ek0p was able to trade equally with Powders large minions while leading in HP. On turn 8, a crucial turn in the game took place as the Ragnaros ek0p played decided to deal 8 damage to Powders face instead of the Cairne Bloodhoof. This brought Powder down to only 11 hp, and he was forced to clear the Ragnaros with a Swipe and the silenced Cairne. From there, both plays had answers: Powders Shade of Naxramas was killed by ek0p's Barron Gedon, while the Baron Gedon was killed by Powders Big Game Hunter.

When the dust settled, Powder was in a bind. With only 11 hp, he was staring down a Gorehound with 4 attack, and 8 powder worth of minions. His only play was Ragnaros and pray it killed one of the minions. It did, but not the most optimal one, and on his next turn, he was brought down to only 2 hp. Ancient of Lore was able to heal for 5 damage, but it was't enough, as Ragnaros once again hit the minion with the least power. ek0p wins Heroes of Cards #3!

If you missed any of the qualifying matches leading up to the grand finals, check out the vods from the rest of the tournament yourself here!