TidesofTime had WEC prize money confiscated, but WEC promises to pay him 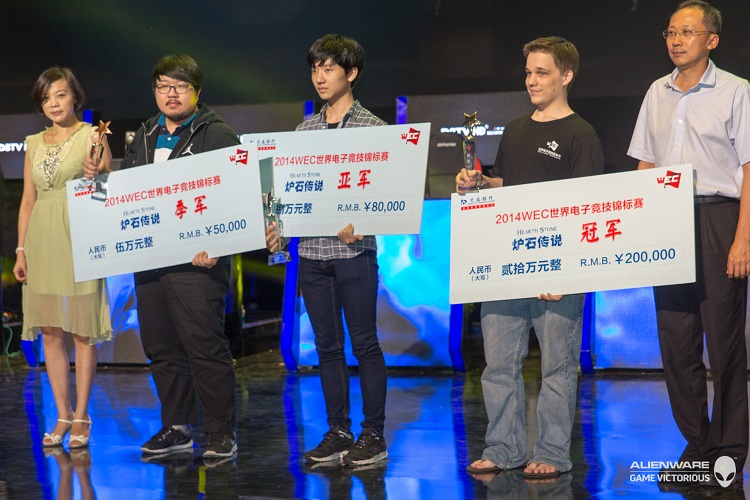 Update (10/16/14): TidesofTime has been in contact with GosuGamers to clarify that it was representatives of WEC, and not the Chinese government or customs officials, who took the money from him after he was unable to bank it or take it out of the country in cash. Customs officials did not confiscate the money, but they did bar him from taking the money out of the country. Tides also stated that he attempted to deposit the funds in a Chinese bank, but all the banks were closed on the Sunday.

Back at the beginning of September, TidesofTime impressed the world when we travelled to China and took home the biggest first prize cheque in Hearthstone eSports to date. However, the giant cardboard cheque was not actually how Tides was paid his prize money. In a glitzy ceremony broadcast live on Chinese television, Tides was handed his massive winnings in cash to the surprise of many in the West.

However, this flashy gesture caused Tides problems when trying to take his prize home with him.

GosuGamers understands that when Tides was leaving China, he declared the cash to Chinese customs officials and had it confiscated. Until recently, Tides and his TempoStorm team have had trouble contacting the organisers to resolve the problem and get Tides his hard earned money.

However, we obtained a statement from WEC staff where they promised that they are in the process of attempting to send Tides his winnings by bank transfer, and that strict Chinese governance is to blame for the time taken. We also understand that Team TempoStorm have recently had assurances from 2P.com, who were the Western liason for WEC, that the money will be paid in the near future.

In a statement to GG.net, WEC staff said:

"First of all, we are very sorry for any inconvenience caused. We think it’s a wonderful idea to pay players their prize money in cash on the scene of finals and it was proofed that players and audience there were quite excited at that moment. It’s our mistake, without concern for limits of carrying hard cash across the border out of China.
"At present, our financial department is dealing with reward deposit. In China, the process of sending foreign remittances is kind of complicated. Besides, it’s a large sums of reward and there would be some issues about tax. For now, we are trying to handle it as a regular money transfer instead of a reward deposit. The application of money transfer has already been submitted to our bank and there would be a check by bank and government. At the moment, the status shows that the transfer is still in process and we were told there should be a response around 15th this month. We deeply appreciate the player’s understanding and patience. The process is more intricate than we thought and we are trying our best to accomplish it."
Responding to the statement, TempoStorm team manager Dan 'Frodan' Chou said:
"We're happy that WEC plans to faithfully follow up with their prize money. We understand things do not always go as planned, but as long as Tides gets his proper payout then there is nothing to worry about!"
Gosu “GosuGamers” Gamers
Share Tweet
253 people reacted to this post