Half a year after the official release of the game, the Hearthstone scene in China has grown to massive proportions, with numbers well in the seven figures. This reveals Team HOC manager and WEC caster Richard Knight in an interview with GosuGamers during the WEC grand finals.

Hearing about China's expansion as far as Hearthstone is concerned should surprise no one. Known for being one of the most active progaming nations, ruling the WarCraft 3 scene and having baptised Dota into something of a national sport, it was only logical for China to pick up Blizzard's unique project. Being a free, easy to get into and learn game, Hearthstone absolutely exploded on the gaming market, enjoying 10 million registrations following the official release and becoming the most downloaded iPad app in 16 countries.

Having an enormous population and traditions in gaming, China currently comprises approximately 10% of the entire Hearthstone market, according to Richard Knight, a professional streamer and caster. But sheer numbers are not the only thing developing with rapid speed in the region. More than 200 progamers are competing everyday in China and the scene has evolved into a structured environment, where players are ranked and whose scores are recorded to establish a unanimous ladder system for the progaming population. The best players, Richard says, can earn upwards of 1 million CNY, or approximately $163,000, over the course of a year.

“
We have almost 200 players for Hearthstone in China right now. We have about six major tournaments every year and we have a league right now where progamers like me can compete and have ladder, and score and rankings. And if you do well in those, you can win about 1,000,000 CNY (approximately $163,000) over a year but if you’re not doing too well, you’ll probably be earning 2,000 CNY a month (approx. $385).”

According to Richard, the growing interest in Hearthstone came after the release of Curse of Naxxramas, Hearthstone's first expansion. Not only has the player population grown to over 1 million, but it has resulted in curious cases where game's welcoming nature and developed professional scene seeing ten-year-old kids aspiring to become progamers. And getting support from their parents as well.

The growth of the competitive environment has also led to tournaments, which are way more lucrative than western ones prize-pool-wise, giving their champions quite the fat cheques. The 2013 edition of Red Bull's ECL won by former SC2 player Comm offered a $5,700 total prize purse, a number unheard of in competitive Hearthstone at that point of time. Season 2 of the same tournament almost doubled that amount, giving away $10,000 - a number comparable to prominent Europe-organized events like DreamHack Summer and IEM Shenzhen. Additionally, the WEC 2014 grand finals boast the largest prize pool in Hearthstone history to date for a total of $62,000, beating the previous record holder, OGN's CN vs KR Masters, and its $54,000.

What's more, China has already established a running team league, the NEL Summer. With ten teams competing over the course of two months, the tournament resembles its western cousin Gentlemen Cup but, once again, blows it out of the water with the prize pool NetEase have put on the table - a good $32,000 for the Premier and Challenger League together, which has lured some of the biggest eSports brands in China like World Elite, Invictus Gaming and ViCi Gaming to pick up players and start competing. 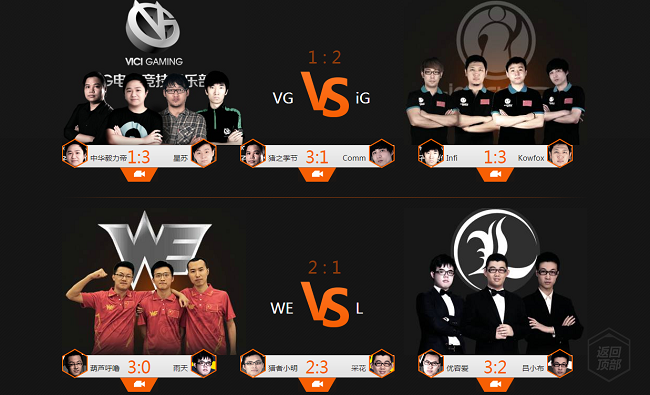 NEL Summer gathers some of the most known organizations like VG, WE and iG

Although China finished third overall in the aforementioned WEC in terms of money won ($4,900 between Fuoliver and ChinaYLD), Knight says the opportunity to meet and compete against Western players is a huge motivation for the Chinese to practice and get better.

“
Fuoliver practiced ten hours for the tournament on Thursday with me and another twelve hours with his team-mate.”

The dedication might've failed at WEC but has certainly given results elsewhere. The ongoing CN vs KR Masters Season 2 has filled seven of the eight quarter final slots with Chinese players to Korea's only one. Unless RenieHouR manages to overcome three China players in a row, the red flags will be cashing another first place cheque and another incentive for more players to pick up the game and start competing.

The full interview with Richard Knight can be read below.

We’re here at WEC 2014 with Richard Knight, a Hearthstone streamer and professional caster for the Chinese scene!

Hey guys! I’m glad that you came to do interview with me, because that’s the first time ever I do an English interview.

From Western’s perspective you don’t really get to know the Hearthstone scene in China. Tell us about it – how big is it, is there a structure with teams, leagues?

We have almost 200 players for Hearthstone in China right now. We have about six major tournaments every year and we have a league right now where progamers like me can compete and have ladder, and score and rankings. And if you do well in those, you can win about 1,000,000 CNY (approximately $163,000) over a year but if you’re not doing too well, you’ll probably be earning 2,000 CNY a month (approx. $385).

We have a progamer called MagicWind – he competed in CN vs KR Masters 1 and got first and he earns like less than the average salary in CNY, but very close.

We also have two main broadcast channels like Twitch.tv and if you get famous, you can sign with them to stream on their platform.

Outside the competitive player circuit – how big is the community for Hearthstone overall? How many players play or tune to watch Hearthstone?

We have more than 1,000,000 people playing Hearthstone right now. I guess the number is bigger though – I don’t have the actual number – and the community is growing faster and faster after Naxxramas because everybody wants to join a team and learn how to play this game. Hearthstone is so easy to get into, actually, that there’s 10-year-old kid aspiring to become a progamer. And his dad actually supports that – it sounds crazy but that’s what’s happening right now.

How is he doing?

He actually wins against the progamers.

That’s the next pro right there!

Let’s talk about WEC. We don’t get many West vs East tournaments, how important is WEC to the Chinese scene?

We don’t have that big tournament experience against the foreigners. We have two competitors here – ChinaYLD and Fuoliver – who are both good players. Fuoliver might be slightly better than ChinaYLD overall, and he practiced ten hours for the tournament on Thursday with me and another twelve hours with his team-mate.

China and Korea often face each other. How does China fare against Korea, who’s the better region?

For the record, in CN vs KR Masters 2, we have seven players in the quarter finals to Korea’s one. I guess we’re going stronger right now.

You’re casting Hearthstone professionally. How much time do you spend on Hearthstone on a daily basis? I guess since you’re a progamer yourself, you also know the other pros personally, which helps give you insights.

Yes, I know the guys personally. I actually have my own team in NEL, HOC, and the guys are doing really well (Editor’s note – At the time of this interview, HOC are third in Group B with a 2-2 score). Myself, I think I’m ranked 35th in China on GosuGamers.

So next time you might even be playing, not just casting it?

I actually played in the qualifiers but got beaten by Fuoliver!

So definitely you’re rooting for him?

Yes, I want to say I only lost to the champion! *laughs*