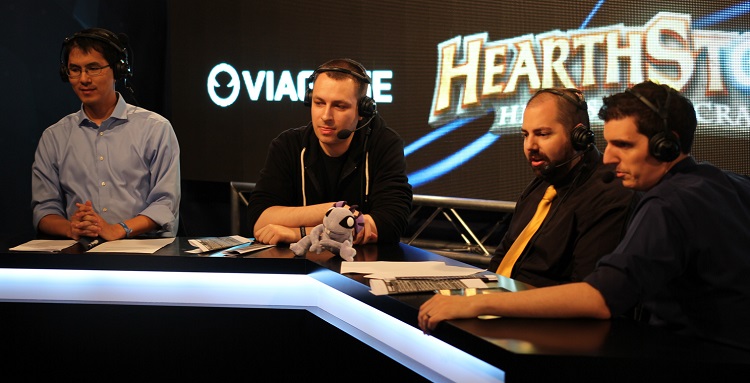 DreamHack Summer in on the way with lots of Hearthstone action. Follow the day with our live blog!

Darkwonyx and TidesofTime out of DreamHack Summer as day one completes

22:45 CET - Reynad follows Ek0p into playoffs after taking revenge on

Reynad's Hunter continues to deliver good results on DreamHack soil. The American player scoreboarded a 2-0 against Bucharest silver medalist Danielctin14, beating his Mage and Miracle in two tense games. This is a revenge victory for Reynad who lost to the Romanian in Group A's opening match earlier, a series played off stream.

Reynad's triumph closes Group A and moves him into the top eight of DreamHack Summer, while Danielctin14 follows Savjz out of the tournament. Ek0p first to playoffs with a flawless 4-0

Yet to be defeated on stage, DogeHouse's Ek0p moves on to the DreamHack quarterfinals, banking a 2-0 against Bucharest silver medalist Danielctin14. The power of the token Druid broke the spine of the face Hunter and miracle Rogue of the Romanian (the latter thanks to a second Savage Roar topdeck) and Danielctin 14 will now have to go through Reynad if he's to keep his tournament life.

Savjz the first out of DreamHack main event

Curse captain Savjz packs his bags as he gets ousted from the tournament by Tempo Storm founder Reynad after a three-game series, quite worth watching.

The series began with a Druid mirror which went into Reynad's favor. Even though the American "misplayed" some of his turns and was punished by the burning rope of the timer, Savjz's Ragnaros on the other side of the board couldn't land the finishing blow.

Savjz did recover in game two, getting a great starting hand with Miracle, even drilling through a T1 Sen'jin Shieldmasta. In game three however, as he faced Reynad's Hunter, it was the Finn who experienced the turn time limit. The rope burned out before Savjz could heal himself with an Eearthen Ring Farseer, giving easy lethal to Reynad.

For Bucharest top 4 finisher Rdu, this was a big match. Featured on the main stream, the Romanian had to play Curse powerhouse and undefeated Fight Night player Darkwonyx in the opening match of Group B.

Running a Druid deck against Rdu's frost Mage, Darkwonyx set up an early 1-0 lead but his joy was shortlived. As most people would predict, a miracle came out of the Romanian and after some tough decisions and card draw mayhems, the underdog stood atop the Swedish beast with a 2-1. Rdu will play the winner of TidesofTime and Realz next.

This match was not streamed, hence the twitter updates from Frodan.

Reynad vs daniel game 1 seems to be in reynads favor. Druid vs freeze mage. Reynad pops iceblock with virtually no pressure.

Reynad vs daniel game 1 seems to be in reynads favor. Druid vs freeze mage. Reynad pops iceblock with virtually no pressure.

Daniel draws alex too late, no way for him to swing it. Too much dmg on board for reynad. He wins game 1.

Reynad fast out of the gate with innervated yeti. Daniel uses lots if resources. Reynad presses adv but daniel keeps board clear.

Potential big turn as Daniel allows his 8/4 gadgetzan to be taken by reynad's sylvanas.

Reynad dropping big creatures and taunters like sunwalker but daniel keep sneaking in damage. He drops a 10/10 van cleef now.

Miracle v miracle for game 3. Reynad gets his gadgetzan earlier out and grabs early life lead.

Daniel controlled the board for several turns. Reynad looks like he is in crisis mode. Uses both shadowsteps on edwin.

Daniel finishes and clinches the series 2-1. Okay sorry about spam ^^ hopefully they get an alternate stream up or something.

Ek0p opens Ro16 with 2-0 against ex-teammate

Doge powerhouse Ek0p put a strong showing against Savjz, pinning back-to-back victories thanks to his token Druid to deal the Finn his first loss in the tournament. Savjz brough a Miracle Rogue and a Shaman to the table but the aggression from the German was the downfall of the Curse captain.